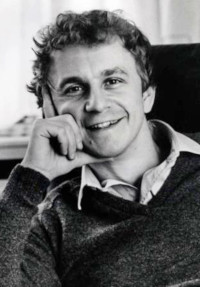 Peter Alexander McWilliams (5 August 1949 – 14 June 2000) was an American self-help author who advocated for the legalization of marijuana.

All About Me - Peter McWilliams

PETER McWILLIAMS has been writing about his passions since 1967. In that year, he became passionate about what most seventeen-year-olds are passionate about—love—and wrote Come Love With Me & Be My Life. This began a series of poetry books which have sold nearly four million copies. ... Personal freedom, individual expression, and the right to live one's own life, as long as one does not harm the person or property of another, have long been his passions. He wrote about them in the 1993 book (revised in 1996) Ain't Nobody's Business if You Do: The Absurdity of Consensual Crimes in Our Free Country.
Laissez Faire Books

McWilliams was an author on toleration, love, computers, and other subjects -- more than 30 books altogether which have reportedly sold some 6 million copies. His book on meditation knocked The Joy of Sex off the #1 spot on the New York Times bestseller list. ... He sparked controversies aplenty which led to his appearances on the most-watched TV talk shows including The Oprah Winfrey Show, Larry King, Sally Jessy Raphael and, in years past, Donahue, and The Regis Philbin Show. He was harassed by government agents for using marijuana to ease the torment of AIDS, from which he eventually died.

McWilliams, who suffered from AIDS and non-Hodgkin's lymphoma, had used marijuana to suppress the nausea that was a common side-effect to the potent medications ... The marijuana was legal, thanks to California's Proposition 215 ... passed in 1996 ... However, in late 1997, McWilliams was arrested by federal drug agents and charged with conspiracy to grow and sell marijuana. At the time, McWilliams said he was innocent of any criminal intent. ... When his case went to trial, a federal judge ruled that McWilliams could not mention his illnesses — or introduce as evidence any of the documented benefits of medical marijuana.
Related Topic: John Stossel

The Life and Death of Peter McWilliams: Another casualty of the War on Drugs [PDF], by R. W. Bradford, Liberty, Aug 2000
Tribute to McWilliams, relates his life from 1996 until his death in June 2000, from being unable to use marijuana to alleviate the nausea caused by AIDS and cancer drugs

[Peter] never descended into hatred ... The third astonishing thing about Peter was his remarkable generosity of spirit. He always offered help and encouragement to others, no matter what his own circumstances were. A few months ago, I was contacted by a publisher with a request to reprint an article of Peter's that had appeared in Liberty. The publisher was one of the few who routinely is willing to pay for reprint rights, so I called Peter with the good news, and asked him how much he'd like me to ask for his article. "Nothing," he said. "I want to encourage people to reprint my writing on the drug war."
Related Topics: War on Drugs, Government
Peter McWilliams - Hero of the Day, The Daily Objectivist, 2000

In 1967, at age 17, McWilliams began his career by writing poetry. He went on to self-publish books about meditation, coping with depression, surviving the loss of a loved one, and computers, among other varied subjects. He has also authored a popular 'Life 101' series of self-help books. In 1993 he published Ain't Nobody's Business If You Do: The Absurdity of Consensual Crimes in Our Free Country; a revised edition was put out a few years later. McWilliams would soon fall victim to the same noxious interventionism of the Busybody State that is the subject of his book.
Related Topic: War on Drugs
Peter McWilliams, RIP, by William F. Buckley Jr., 22 Jun 2000
Memorial essay, discussing how and why McWilliams died as well as Buckley's personal recollections of their friendship

Peter McWilliams is dead. ... Peter was a wry, mythogenic guy, humorous, affectionate, articulate, shrewd, sassy. He courted anarchy at the moral level. ... We were old friends, and I owe my early conversion to word processing to his guidebook on how to do it. Over the years we corresponded, and he would amiably twit my conservative opinions. When I judged him to have gone rampant on his own individualistic views in his book, I wrote him to that effect. I cherish his reply — nice acerbic deference, the supreme put-down. ... Imagine such a spirit ending its life at 50, just because they wouldn't let him have a toke.
Related Topic: War on Drugs

Ain't Nobody's Business If You Do: The Absurdity of Consensual Crimes in Our Free Country, 1993
Contents: Part I: The Basic Premise - Part II: Why Laws Against Consensual Activities are not a Good Idea - Part III: A Closer Look at the Consensual Crimes - Part IV: Six Chapters in Search of a Shorter Book - Part V: What To Do?
Related Topic: Moral Liberty
Life 101: Everything We Wish We Had Learned About Life in School--But Didn't, Apr 1990
Contents: Part One: Introduction To Life - Part Two: Advanced Tools For Eager Learners - Part Three: Master Teachers In Disguise - Part Four: Tools For Successful Doers - Part Five: To Have Joy And To Have It More Abundantly
Related Topics: Learning, Life
Love 101: To Love Oneself Is the Beginning of a Lifelong Romance, 1995
Partial contents: Self-Love vs. Romantic Love - Self-Love vs. Selfishness - Self-Knowledge - Self-Improvement - Sex - Depression - Committing to Your Dream—and Keeping That Commitment - Power-Point Relationships - Laughter—The Shortcut to Self-Love
Related Topics: Romantic Love, Self-Esteem

The introductory paragraph uses material from the Wikipedia article "Peter McWilliams" as of 25 Jun 2018, which is released under the Creative Commons Attribution-Share-Alike License 3.0.