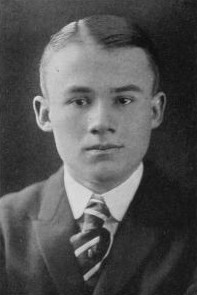 William Henry Chamberlin (17 February 1897 – 12 September 1969) was an American historian and journalist. He was the author of several books about the Cold War, communism and US foreign policy, including The Russian Revolution 1917-1921 (1935), which was written in Russia between 1922 and 1934 while he was the Moscow correspondent of The Christian Science Monitor.

William Henry Chamberlin (1897–1969) was an American journalist best known for his writings on the Cold War, Communism, and U.S. foreign policy.

William Henry Chamberlin: 1897-1969, The Freeman, Nov 1969
Memorial editorial published in The Wall Street Journal on 16 Sep 1969, reprinted in the Nov 1969 The Freeman together with excerpts of Chamberlin's Freeman article of May 1959

Readers of these pages during the past three decades have become familiar with the name of William Henry Chamberlin. Few of them, however, came to know the man. Though he wrote nearly a score of books, he remained essentially a newspaperman. In a career that spanned half a century, he traveled extensively, meeting people, asking questions, shaping and reshaping his own views. ... Through it all Mr. Chamberlin remained ebullient, ever confident that man, given time and proper leadership, could find his way through the wilderness. Well past the age when most men retire, he was still plying his newspaper trade.

How Franklin Roosevelt Lied America Into War, Perpetual War for Perpetual Peace, 1953
Excerpted from chapter 8, "The Bankruptcy of a Policy", of the Harry Elmer Barnes anthology; describes several actions by Roosevelt and his administration which contradicted his campaign pledges "to keep our country out of war"

According to his own official statements, repeated on many occasions, and with special emphasis when the presidential election of 1940 was at stake, Franklin D. Roosevelt's policy after the outbreak of the war in Europe in 1939 was dominated by one overriding thought: how to keep the United States at peace. ... One is left, therefore, with the inescapable conclusion that the promises to 'keep America out of foreign wars' were a deliberate hoax on the American people, perpetrated for the purpose of insuring Roosevelt's re-election and thereby enabling him to proceed with his plan of gradually edging the United States into war.
Related Topics: Germany, Japan, Franklin D. Roosevelt, United Kingdom, World War II

The introductory paragraph uses material from the Wikipedia article "William Henry Chamberlin" as of 20 Jan 2017, which is released under the Creative Commons Attribution-Share-Alike License 3.0.