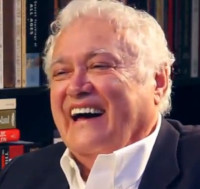 John Taylor Gatto (15 December 1935 – 25 October 2018) was an American author and former school teacher who taught in the classroom for nearly 30 years. He devoted much of his energy to his teaching career, then, following his resignation, authored several books on modern education, criticizing its ideology, history and consequences. He is best known for his books Dumbing Us Down: the Hidden Curriculum of Compulsory Schooling, and The Underground History of American Education: A Schoolteacher's Intimate Investigation Into the Problem of Modern Schooling, which is sometimes considered to be his magnum opus.

John Taylor Gatto
Gatto's personal website, maintained posthumously; includes biography, blog, videos of some of his talks, and link to his author page at Amazon

"John Taylor Gatto was born in Monongahela, Pennsylvania ... He climaxed his teaching career as New York State Teacher of the Year after being named New York City Teacher of the Year on three occasions. He quit teaching on the OP ED page of the Wall Street Journal in 1991 ... claiming that he was no longer willing to hurt children. Later that year he ... launched a career of public speaking in the area of school reform ... In 1992, he was named Secretary of Education in the Libertarian Party Shadow Cabinet ... In 1997, he was given the Alexis de Tocqueville Award for his contributions to the cause of liberty ..."

Dumbing Us Down: The Hidden Curriculum of Compulsory Schooling, Sep 1991
Contents: The Seven-Lesson Schoolteacher - The Psychopathic School - The Green Monongahela - We Need Less School, Not More - The Congregational Principle
Related Topic: Compulsory Education

The introductory paragraph uses material from the Wikipedia article "John Taylor Gatto" as of 29 Oct 2018, which is released under the Creative Commons Attribution-Share-Alike License 3.0.