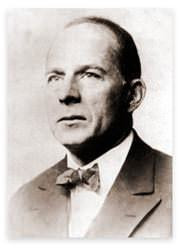 Garet Garrett (19 February 1878 – 6 November 1954), born Edward Peter Garrett, was an American journalist and author, who is noted for his opposition to the New Deal and U.S. involvement in World War II.

An American Empire! If You Want It instead of Freedom, Part 1, by Richard Ebeling, Future of Freedom, Apr 2003
Examines Garet Garrett's 1952 essay "The Rise of Empire" and contrasts it with Charles Krauthammer's "The Unipolar Moment Revisited" and the concept of "unilateralism" espoused by him

Fifty years ago, the classical liberal author and journalist Garet Garrett published a collection of essays called The People's Pottage (1953). In the midst of the Korean War, he tried to persuade the American people that the United States was on a new course that conflicted with the original conception of the nation ... Garrett summarized what he considered the requisite signs of the emerging American Empire ... Out of the ashes of the Second World War, Garrett argued, the United States had taken on the status and position of a global policeman responsible for the "the peace of the world."
Related Topics: Imperialism, Militarism, United States
Blueprint for Dictatorship, by Justin Raimondo, 30 Apr 2007
Describes how the Defense Authorization Act, the Military Commissions Act and changes to the Insurrection Act could be used to impose martial law in the United States

This recalls the opening of Garet Garrett's 1952 philippic, Rise of Empire, wherein he diagnosed the essential indeterminacy of the transition: "We have crossed the boundary that lies between Republic and Empire. If you ask when, the answer is that you cannot make a single stroke between day and night; the precise moment does not matter. There is no painted sign to say: 'You are now entering Imperium.'" The usually prescient Garrett got it somewhat wrong ... I'm back to Garet Garrett, who never fails to come up with some apt aphoristic prognostication, this one being from his classic The Revolution Was ...
Related Topics: Attacks of 11 September 2001, George W. Bush, Democratic Party, Militarism, Right to Petition the Government, Republican Party
Garet Garrett (1878-1954) On Empire, by Joseph R. Stromberg, 5 Aug 2000
Biographical and bibliographical essay, focusing on the essays in The People's Pottage

Garrett was born Edward Peter Garrett in Iowa. He became a printer's apprentice and then moved into reporting, working at a number of papers in the Midwest. He moved to Washington, DC, where he covered our first truly imperial administration and adopted the pen-name Garet Garrett. ... Garrett began writing a series of novels – The Blue Wound, The Driver, The Wild Wheel – all of which reflected his belief in the moral soundness of the American way of life and competitive capitalism. ... His one departure from a 'pure' free-market defense of capitalism was his espousal of protective tariffs.
Related Topics: Conservatism, Imperialism, Franklin D. Roosevelt
Garet Garrett: Exemplar of the Old Right, by Justin Raimondo, The American Enterprise
Review of Garrett's The American Story (1955)

Garrett wrote novels in his youth, short stories and serials for the old Saturday Evening Post – he later became the magazine’s chief editorial writer – and his flair for the dramatic, the unexpected turn of a phrase, embellishes his later essays and nonfiction books. His classic trilogy of booklets, The Revolution Was, Ex America, and Rise of Empire ... In a last burst of eloquence he turned out three books in the final few years of his life, including The American Story – a history book such as could not be written (or published) today.
Related Topic: American Revolutionary War
Garet Garrett Revived, by Bruce Ramsey, 26 Mar 2002
Discusses Garrett's political writings and announces a new collection of his Saturday Evening Post articles about the New Deal, edited by Ramsey

Garet Garrett is a man of special flavor on the Right ... In the 1920s he wrote about international finance and about the push for a federal bailout of farmers; in the early 1930s, about bank failures and the international debt crisis of 1931. Beginning in 1933, he turned his rhetorical cannon on the New Deal. In his day, Garrett was thought of as a conservative – a hard-core conservative. If we remember him now a libertarian, it is because, conservatives are not nearly so hard-core today. His argument for liberty was not from natural rights, and though his arguments were very often economic, his basic premises were not.
Related Topics: United States Constitution, Government, Liberty
Non-Marxist Theories of Imperialism, by Alan Fairgate, Reason, Feb 1976
Examines writings of critics of imperialism that are not based on Marxist analysis

Garet Garrett is another prominent representative of the isolationist movement who recognized the important links between domestic economic policies of the New Deal and interventionist foreign policies adopted during World War II and the postwar period. ... Among the fundamental characteristics of Empire Garrett listed: a strong executive power, subordination of domestic to foreign policy, ascendancy of the military over the civilian mind, a dominant psychological sense of constant fear, and a 'vast system of entanglement' which would automatically involve the United States in any conflict that erupted in any part of the world.
Related Topics: Latin America, Banking, John Bright, Richard Cobden, John T. Flynn, Foreign Entanglements, Imperialism, Leonard Liggio, Militarism, George Orwell, Murray Rothbard, Jean-Baptiste Say, Joseph Schumpeter, Adam Smith, Joseph R. Stromberg, William Graham Sumner
We Were Warned about the Rise of Empire, by Sheldon Richman, The Goal Is Freedom, 13 Jun 2014
In light of calls for U.S. re-intervention in Iraq, revisits Garet Garrett's 1952 essay "The Rise of Empire" discussing Garrett's five traits that are "the true marks of Empire" and their applicability to the United States in 2014

In 1952 the journalist and novelist Garet Garrett (1878–1954) took up this question in contemplating post-World War II America. The resulting essay, "The Rise of Empire," is included in his anthology, The People's Pottage. It bears close study today. Garrett was an important figure in what has come to be known as the "Old Right," an eclectic group of writers and politicians (mostly Republican) who emerged in the 1930s to oppose militarism and the centralization of power under the New Deal ... Garrett began with this somber message:

We have crossed the boundary that lies between Republic and Empire ...

If Garet Garrett (1878-1954) is known at all today, it is by those who are captivated by the handful of intellectuals who wrote in opposition to the New Deal planning state and the regimentation of national life it brought about ... Garrett is a case study in a forgotten genius ... Despite astonishing eloquence and prescience, Garrett's stirring attacks on the New Deal and condemnations of the American imperial mindset found few takers in the Cold War era. Meanwhile, his earlier career as a business journalist and wonderful novelist in the 1920s had been entirely forgotten by the 1950s.
Related Topics: Entrepreneurship, Federal Reserve System, Prices, Ayn Rand, Franklin D. Roosevelt, Socialism, Technology

Ex America, 1951
The Revolution Was, 1938
Monograph describing the nine problems faced by New Dealers and how they were handled according to "revolutionary technic"

There are those who still think they are holding the pass against a revolution that may be coming up the road. But they are gazing in the wrong direction. The revolution is behind them. It went by in the Night of Depression, singing songs to freedom. ... All of this is said by one who believes that people have an absolute right to any form of government they like, even to an American Welfare state, with status in place of freedom, if that is what they want. The first of all objections to the New Deal is neither political nor economic. It is moral.
Related Topic: Aristotle

The introductory paragraph uses material from the Wikipedia article "Garet Garrett" as of 1 Jan 2018, which is released under the Creative Commons Attribution-Share-Alike License 3.0.