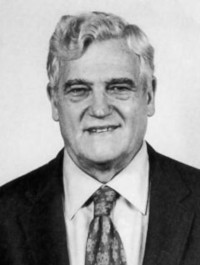 Percy L. Greaves Jr. (24 August 1906 – 13 August 1984) was an American limited free-market economist, historian and presidential candidate. In 1974, Murray Rothbard reported Greaves "believes in taxation, and ... favors the draft" (see 'Purity And The Libertarian Party' in The Libertarian Forum, May 1974, pp 3 & 7).

[One] day I applied for a position as an editorial assistant. I wrote that I was fed up with government red tape. Well, at the other end of that letter was Percy Greaves, who would later become my husband. He ran the Foundation for Freedom in Washington, D.C., but that organization did not do well ... Percy was the real Misesian ... I've heard it said that Percy worshiped Mises blindly, but that was not true. He was drawn to Mises because he realized that Mises had the answers and that others did not ... Percy served as chief of the minority staff on the Congressional committee that investigated Pearl Harbor.
Related Topics: Federal Reserve System, Government, Henry Hazlitt, Human Action, Ludwig von Mises, Leonard Read, Franklin D. Roosevelt
Percy L. Greaves, Jr., 1906-1984, by J. Marcellus, The Journal of Historical Review, 1984
Memorial note

A highlight of Mr. Greaves's long and distinguished career in both the private and public sectors was his service as Chief of Minority Staff for the 1945-46 Joint Congressional Investigation of the Pearl Harbor Attack. ... Mr. Greaves was a free market economist for U.S. News (the forerunner of U.S. News and World Report) ... A long-time associate and friend of Ludwig von Mises, he served as Armstrong Professor of Economics with Mises at the University of Plano, Texas. He was also a seminar speaker and discussion leader with the Foundation for Economic Education at Irvington-on-Hudson, New York.
Related Topic: World War II

Glossary: Central bank, Mises Made Easier, 1974
Definition of central bank, based on Mises' The Theory of Money and Credit (1953)

An ideal type (q.v.) rather than a scientific term since no two central banks are precisely alike. Almost all modern countries have a central bank which is a large bank operating either as a direct governmental institution or as a private institution whose management is strictly controlled by the government. Most central banks were established by law as the result of a national financial emergency, such as the collapse of a prior credit expansion (U.S. Federal Reserve Banks), or the desire of the government for more funds than it cares or dares to raise through taxes or private loans (Bank of England).
Related Topic: Central Banking
Glossary: Fascism, Italian, Mises Made Easier, 1974
Definition of Italian fascism, based on Socialism: An Economic and Sociological Analysis (1951) and three other Mises' works

The policies and principles of the Fascist Party of Italy providing for the complete regimentation of business and the suppression of all opposition. This Party, founded in 1919 by a former socialist editor, Benito Mussolini (1883-1945), marched on Rome in 1922. Mussolini then assumed control of the government and gradually expanded his power until he became an absolute dictator. After the successful Allied invasion of Italy, the Fascists were deposed in 1943 and Mussolini was assassinated by Italian opponents in 1945.
Related Topic: Fascism
Glossary: Inflation, Mises Made Easier, 1974
Definition of inflation, based on Human Action (1966), four other Mises' works and Greaves' Understanding the Dollar Crisis 1973

(from the Greek, Praxis, action, habit or practice; logia, doctrine, theory or science). The science or general theory of (conscious or purposeful) human action. Mises defines action as 'the manifestation of a man's will.' Accordingly, he considers the use of the adjectives 'conscious or purposeful' to be redundant. Praxeology is a manifestation of the human mind and deals with the actions open to men for the attainment of their chosen ends. Praxeology starts from the a priori category of action and then develops the full implications of such action.
Related Topic: Praxeology

Mises Made Easier: A Glossary for Ludwig von Mises' Human Action, 1974
Alphabetical list of definitions, each with one or more references to Mises' books; includes the essay "A Critique of Böhm-Bawerk's Reasoning in Support of his Time Preference Theory"
Related Topic: Ludwig von Mises

The introductory paragraph uses material from the Wikipedia article "Percy L. Greaves Jr." as of 30 May 2018, which is released under the Creative Commons Attribution-Share-Alike License 3.0.