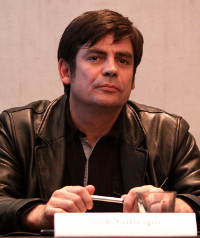 Nicholas John Gillespie (born 7 August 1963) is an American libertarian journalist who was former editor-in-chief of Reason magazine from 2000 to 2008. He is currently a contributing editor of Reason.com and the editor-in-chief at Reason.tv. He has written articles or been a commentator for a variety of media outlets. Gillespie has edited one anthology, Choice: The Best of Reason, and co-authored one book, The Declaration of Independents.

Nick Gillespie is the editor of Reason.com and Reason.tv, and the former editor-in-chief of Reason magazine (2000-08) ... When Gillespie took over the editorial reins in 2000, he gave Reason a pop-culture makeover. Under his guidance, the magazine focused more on movies, music, television, and the Internet — and ran cover stories on the Beatles, Martha Stewart and consumerism. Gillespie told The Washington Post that Reason started devoting more space to cultural issues because "let's face it, the Beatles are much more important to people's lives than any politician."
Related Topic: Reason
Nick Gillespie - Reason.com
Author page at Reason.com; includes picture, profile and links to recent articles

Nick Gillespie is an editor at large at Reason, the libertarian magazine of "Free Minds and Free Markets." ... "Nick Gillespie is to libertarianism what Lou Reed is to rock 'n' roll, the quintessence of its outlaw spirit," writes Robert Draper in The New York Times Magazine. "For the past 20 years, Gillespie has been a writer, editor and intellectual godfather for Reason, the movement's leading journal since its founding in 1968." ... Gillespie served as the editor in chief Reason.com and Reason TV from 2008 through 2017 and was Reason magazine's editor in chief from 2000 to 2008.
Related Topic: Reason

Mr. Mxyzptlk (a.k.a. Wilhelm Von Humboldt, a.k.a. Solomon Grundy) is Nick Gillespie, editor in chief at Reason, a culture-and-politics magazine based in Los Angeles. With each passing week Nick is more convinced that real winners do use drugs, that you can't abort fetuses with nuclear arms, and that Christian rock is neither.

Election 2006: A War Referendum, by Justin Raimondo, 16 Oct 2006
Discusses the then forthcoming 2006 U.S. congressional elections as a referendum on the Iraq War and commentary from Markos Moulitsas and Nick Gillespie in a Cato Unbound debate titled "Should Libertarians Vote Democrat?"

"When it comes to foreign policy, I'm curious where [Markos] Moulitsas and [Bruce] Reed stand regarding Bill Clinton, who was far more promiscuous in his use of the military ...: According to a 2000 Cato analysis, Clinton set a then-record for major troop deployments, with 25 during his eight years in office ... And as awful as the Bush administration is on privacy and civil liberties, it's not as if the last Democratic president (and his terrible attorney general) didn't give rise for concern ..."

Nick Gillespie ... says that in a broad sense Hayek anticipated many postmodern critiques. "Hayekian liberalism and postmodernism alike are not interested in total knowledge, or in the total institutions necessary to maintain such a vision," says Gillespie, who holds a doctorate in literary studies. "For Hayek, the very essence of liberalism properly understood is that it replaces the ideal of social uniformity with one of competing difference." That's why Foucault, though no Hayekian liberal, "recognized that Hayek's formulation of a private sphere was a meaningful hedge against the worst excesses of state power."
Related Topics: Milton Friedman, F. A. Hayek, Money, Prices, The Road to Serfdom

Congress Strong-Arming Baseball? That's Foul, by Nick Gillespie, Matt Welch, The Washington Post, 20 Jan 2008
Discusses the 2008 Oversight and Government Reform congressional hearings on the use of steroids in the MLB

Rep. Christopher Shays, the Yogi Berra of the latest (but alas not last) round of unintentionally comic congressional hearings on steroids, should have headed to the showers after his opening line last Tuesday: "This is almost surreal to me." He got that much right ... it's not remotely a job for Congress. At a time when Capitol Hill's approval ratings are even lower than President Bush's and when every White House candidate doing better in the polls than Mike Gravel is running on a campaign of "change," it's troubling—if as predictable as the Nationals losing 80 games—that Congress insists on grandstanding.
Related Topics: Baseball, Government
Is Adam Smith the Father of Economics and Free-Market Capitalism? [Reason Podcast], by Nick Gillespie, Naomi Brockwell (moderator), Gene Epstein, Mark Skousen, 5 Jul 2017
Report, audio and transcript of the debate, held on 13 Jun 2017, on the resolution "Adam Smith should be honored as the founder of modern economics and free-enterprise capitalism" between Mark Skousen for the affirmative and Gene Epstein for the negative

In February 1793, the British Empire was in crisis. Over the past 10 years, the United Kingdom, the greatest military power in the world had lost its most valued colonies to a makeshift army of American ruffians and was near bankruptcy. ... Lord North had been replaced by a very young but dependable Prime Minister, the Lord of the Treasury William Pitt, the younger. ... he was a student the new political economy, the new doctrine of economic liberalism. ... the system of natural liberty advocated by a Scottish professor of moral philosophy who had gained immortality with the publication of a big, fat book ...
Related Topics: Richard Cantillon, Murray N. Rothbard, Adam Smith
Rock and Roll Entrepreneur: Frank Zappa's true legacy., Reason, Apr 2005
Discusses Zappa's life, based on Barry Miles' book Zappa (2004) and comparing Zappa to Herman Melville in their attitude towards their audiences

Was Frank Zappa, the memorably mustachioed musician who died in 1993 of prostate cancer, rock and roll's answer to Herman Melville? Maybe so, and not just because the Moby-Dick scribe sported some pretty odd facial hair. ... Zappa fared much better, in part because of one final kink in his life: ... he was from the beginning a sharp businessman who knew that controlling the means of reproduction ... was central to his aesthetic and economic independence. In the '80s, he was able to sell his back catalog for $22 million, a tidy sum that made him rich even as it helped to bankrupt the purchaser, Rykodisc.
Related Topics: Entrepreneurship, Freedom of Speech
Tibor Machan, a Founding Editor of Reason, RIP, 25 Mar 2016
Memorial tribute, describing Machan's involvement with Reason through the years, includes two videos, one of Machan discussing Ayn Rand and another in a panel with his co-founders and a former editor

I'm sad to write that Tibor R. Machan, who along with Robert W. 'Bob' Poole and Manny Klausner was one of the people who sustained and grew Reason magazine into the premier libertarian voice in public debates over politics, culture, and ideas, has died at the age of 77. ... Tibor spoke last year at Reason Weekend ... which happened to be taking place in Santa Barbara, so it was a reunion of sorts. ... He stressed that he and the other co-founders wanted a platform that would produce serious journalism, essays, interviews, policy pieces, and debates that would grow the audience for and influence of libertarian ideas and practices.
Related Topics: Tibor Machan, Reason

When Reason interviewed George Mason University economist Vernon L. Smith back in May, one of the first questions we put to him was, "You're always mentioned as a short-lister for the Nobel Prize in economics. What do you think of that?" The 75-year-old Smith ... responded with a hearty laugh ... Over the years, he gravitated toward a libertarian position ... "Whether we're talking about politics or economics, or even social interaction," says Smith, "the best systems maximize the freedom of the individual, subject to the constraint of others in the system."
Related Topics: Economics, Electric Power, Law, Libertarianism, Transportation
South Park Libertarians, by Trey Parker, Matt Stone, Nick Gillespie, Jesse Walker, Reason, Dec 2006
Transcript of conversation with Trey Parker and Matt Stone, at Reason's August 2006 conference, in Amsterdam, on the future of free expression and free markets in Europe; includes lengthy introduction

What Jesse Walker and I are going to be doing tonight is talking with Matt Stone and Trey Parker about South Park and their other creative endeavors, including 2004's wonderful puppet epic Team America, which was ... the most profound discussion of U.S. foreign policy and the War on Terror to come out of Hollywood. Or Washington, for that matter ... We're going to open things up, though, with a discussion of free speech and censorship issues. Never before in human history have we been more free to express ourselves, and never before have the opponents of free speech been more vocal and, in some instances, deadly.
Related Topics: Colorado, Intellectual Property Laws, Libertarianism, The Oscars, South Park, Freedom of Speech, Television Shows
Stand-Up Guy, by Drew Carey, Nick Gillespie, Steven Kurtz, Reason, Nov 1997
Interview topics range from Hollywood reactions to Carey's humor, his attitude toward government, the ABC network censor, Las Vegas, drug legalization and more

Comedian Drew Carey has become a full-fledged media sensation: His self-titled television show, which airs Wednesdays at 9 p.m. EST on ABC, is beginning its third season ensconced in the Nielsen top 20 (and locked in a ratings war with NBC's Third Rock from the Sun) ... [H]e winces at the mention of people such as Alec Baldwin and Barbra Streisand—there is a proto-political message in much of his humor. As the Hard Rock example suggests, Carey believes that people are far more resistant to soothing, feel-good rhetoric than its practitioners may fully grasp. In an age of ubiquitous and self-serving spin, that is no small point.
Related Topics: War on Drugs, Government, Humor, Nevada, Freedom of Speech, Television Shows

The introductory paragraph uses material from the Wikipedia article "Nick Gillespie" as of 20 Mar 2018, which is released under the Creative Commons Attribution-Share-Alike License 3.0.