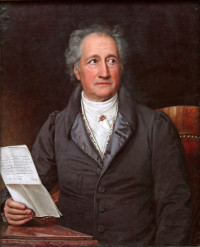 Johann Wolfgang von Goethe (28 August 1749 – 22 March 1832) was a German writer and statesman. His works include four novels, epic and lyric poetry, prose and verse dramas, memoirs, an autobiography, literary and aesthetic criticism, and treatises on botany, anatomy and color. In addition, there are numerous literary and scientific fragments, more than 10,000 letters and nearly 3,000 drawings by him extant.

Johann Wolfgang Goethe is widely recognized as the greatest writer of the German tradition. The Romantic period in Germany (the late eighteenth and early nineteengh centuries) is known as the age of Goethe, and Goethe embodies the concerns of the generation defined by the legacies of Jean-Jacques Rousseau, Immanual Kant, and the French Revolution. His stature derives not only from his literary achievments as a lyric poet, novelist, and dramatist but also from his often significant contributions as a scientist (geologist, botanist, anatomist, physicist, historian of science) and as a critic and theorist of literature and of art.
Johann Wolfgang von Goethe - Online Library of Liberty
Includes portrait, short biography and links to various of Goethe's works

Goethe is often ranked with Shakespeare and Dante as one of the three most important poets in history. He spent the most important part of his life in Weimar and served the duchy in many official capacities. Although his interests ranged from biology to the theory of color, it is his literature, with its powerful presentation of human freedom and the search for meaning in life, that has been of enduring value.

The Fallacy of the Concept of "National Character", by Ludwig von Mises, Omnipotent Government, 1944
Section 2 of chapter 10, "Nazism as a World Problem"; explains why it is incorrect to generalize from some supposedly representative persons of a given nation to a national "character"

In the first World War British propagandists used to cite ... a few lines from Goethe's Faust. But they omitted to mention that the character ... Euphorion, is a counterpart of Lord Byron, whom Goethe admired more than any other contemporary poet (except for Schiller), although Byron's romanticism did not appeal to his own classicism. ... It is contradictory ... to consider only famous men as representative while ignoring the rest ... One man of this group may stand out as much from the rest as the whole group does from the entire nation. Hundreds of poetasters and rhymesters do not outweigh the unique Goethe.
Related Topics: Germany, Self-Esteem
Goethe on National Greatness, by Hans-Hermann Hoppe, The Free Market, Oct 1999
Discusses Goethe's thoughts on political centralization, as told to Johann Peter Eckermann, contrasting the German Confederation (Bund) to centralized France

... Goethe, the greatest of all German writers and poets and one of the giants of world literature. In his political outlook, he was also a thorough-going classical liberal, arguing that free trade and free cultural exchange are the keys to authentic national and international integration. He argued and fought against the expansion, centralization, and unification of government on grounds that these trends can only hinder prosperity and true cultural development. ... Pertinent today as they were when written, Goethe's insights regarding the social and political foundations of culture still demand our attention.
Related Topics: Democracy, France, Germany
Johann Wolfgang von Goethe - Hero of the Day, The Daily Objectivist, 2000
Excerpt from article on Goethe in Encyclopedia Britannica, 8th edition (1852-1860)

... Goethe intellectually, Goethe as a power acting upon the age in which he lived ... In 1832, it was announced by the post-horns of all Europe as the death of him who had written the Wilhelm Meister, the Iphigenie, and the Faust, and who had been enthroned by some of his admirers on the same seat with Homer and Shakespeare, as composing what they termed the trinity of men of genius. And yet it is a fact, that, in the opinion of some amongst the acknowledged leaders of our own literature for the last twenty-five years, the Werther was superior to all which followed it, and for mere power was the paramount work of Goethe.
The Politics of Johann Wolfgang Goethe, by Hans-Hermann Hoppe, The Wall Street Journal Europe, 30 Dec 1999
Revised version of Prof. Hoppe's Oct 1999 The Free Market; nominates Goethe as the "European of the (second) millennium" article

Born in 1749 in the free imperial city of Frankfurt am Main into an upper-middle-class family, Goethe studied law in Leipzig and Strasbourg. However, on receiving his doctorate and practicing briefly as a lawyer, he set out on a spectacularly successful career as poet, dramatist, novelist, lyricist, artist, and critic of architecture, art, literature, and music. He was also a natural scientist and a student of anatomy, botany, morphology, and optics. To this day, he defines the meaning of genius, with a life oeuvre encompassing more than 60 volumes ...
Related Topic: Europe
U.S. Hypocrisy in Cuba, by Jacob Hornberger, 26 May 2006
Comments on a billboard stating "In a free country you don’t need permission to leave the country. Is Cuba a free country?", posted by the U.S. Special Interest Section in Havana for Cubans to read

Most Americans ... view their federal government as a beloved parent, one who never lies to them; who takes care of them and gives them "freedom" ... Most of the rest of the world sees the reality — an increasingly oppressive and military-oriented government whose cruel ... foreign policies have engendered deep-seated anger ... Maybe the Cuban Interest Section in Washington ought to construct its own billboard and post the following message for Americans to read, "Johann Goethe said that none are more hopelessly enslaved than those who falsely believe they are free. Who are freer — the Cuban people or the American people?"
Related Topics: Cuba, Socialism, United States

The introductory paragraph uses material from the Wikipedia article "Johann Wolfgang von Goethe" as of 25 Apr 2018, which is released under the Creative Commons Attribution-Share-Alike License 3.0.