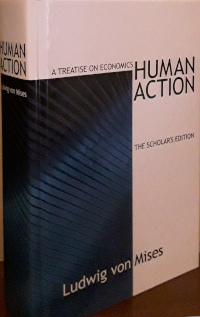 Human Action: A Treatise on Economics is a work by the Austrian economist and philosopher Ludwig von Mises. Widely considered Mises' magnum opus, it presents the case for laissez-faire capitalism based on praxeology, or rational investigation of human decision-making. It rejects positivism within economics. It defends an a priori epistemology and underpins praxeology with a foundation of methodological individualism and speculative laws of apodictic certainty. Mises argues that the free-market economy not only outdistances any government-planned system, but ultimately serves as the foundation of civilization itself.

[In] my thoughts I divided the book [My Years With Ludwig von Mises] into eleven chapters. I decided on all their titles, and I never changed a single one of them. For example, I knew I had to write one chapter about Human Action. People had to know how my husband suffered about this, his greatest work.
Related Topics: Atlas Network, Foundation for Economic Education, The Freeman, Grove City College, Friedrich Hayek, Hillsdale College, Israel Kirzner, Mises Institute, Ludwig von Mises, Lew Rockwell, Murray Rothbard, Hans Sennholz
The life and times of Murray N. Rothbard, by Jim Powell
Full title: The life and times of Murray N. Rothbard, who showed why private individuals can do just about everything that needs to be done
Lengthy biographical essay

Meanwhile, Mises' Human Action was published in September 1949 by Yale University Press. This extraordinary book explained why free markets produce higher living standards than government bureaucrats. It refuted fashionable doctrines, and as Rothbard recalled, "it provided eager libertarians with a policy of uncompromising laissez-faire: in contrast to all other free-market economists of that day or later, there were no escape hatches, no giving away the case with 'of course, the government must break up monopolies,' or 'of course, the government must provide and regulate the money supply.' ..."
Related Topics: American Revolutionary War, analysis, Walter Block, Compulsory Education, John T. Flynn, Foundation for Economic Education, Milton Friedman, Government, F. A. Harper, Karl Hess, Paul Johnson, Manny Klausner, Libertarianism, Man, Economy, and State, Mises Institute, Ludwig von Mises, Money, Monopoly, Property Rights, Ayn Rand, Lew Rockwell, Murray Rothbard, Mark Skousen, The State, Taxation, Vietnam War
Man, Economy, and State: A Treatise on Economic Principles, by Wendy McElroy, 17 Mar 2012
Review and personal impressions of Man, Economy, and State, and in particular the 2004 edition from the Mises Institute which also includes Power and Market

The impact and importance of ... Ludwig von Mises ... should never be marginalized. His magnum opus, Human Action, was a remarkable accomplishment. Mises located the dynamics of the free market within human nature itself. He coined the term "praxeology" to describe the logic of human conduct, ... that is, everyone acts to improve their own satisfaction. Economics, as a discipline, is a subcategory of praxeology. People co-operate with each other, specialize and exchange goods, formed societies from pure self-interest. Thus, the free market is the vehicle of human endeavor and the foundation of civilization itself.
Related Topics: Ludwig von Mises, Murray Rothbard, Man, Economy, and State
Mises's Bibliographer: An Interview with Bettina Bien Greaves, by Bettina Bien Greaves, Austrian Economics Newsletter, 1998
Topics discussed include: Ludwig von Mises, the Mises bibliography project, language knowledge, Leonard Read, Henry Hazlitt, Human Action, the business cycle and her husband's Pearl Harbor book

AEN: Was Human Action out by the time you met Mises?
GREAVES: Yes, and I read it in 1951. I remember standing on a street corner reading it, waiting to be picked up for Mises's seminar. I was captivated by it. Of course I didn't have an economics background, but in some ways that worked to my advantage. Mises's book went against the grain of what was being taught in economics classes and business schools. To understand his approach required first unlearning what was being taught elsewhere at the time ... The laissez-faire politics of the book was no problem for me.
Related Topics: Federal Reserve System, Government, Percy L. Greaves Jr., Henry Hazlitt, Ludwig von Mises, Leonard Read, Franklin D. Roosevelt
Murray, the LP, and Me, by David Bergland, 25 Dec 2002
Lengthy autobiographical essay, focusing on Rothbard, libertarianism and the LP; part of Walter Block's Autobiography Archive

In the early sixties, Ayn Rand and Nathaniel Branden began publishing The Objectivist Newsletter ... It must have been there that Rand recommended Mises' Human Action. I bought it and dove in. Now, this is weird. Without any formal education in economics, I loved that book. The experience of learning so much in a conversation with a great mentor was exhilarating. I was most impressed by its logical order. Over and over again, as I read, a question would arise in my mind and Mises would address that question in the next paragraph.
Related Topics: Barbara Branden, Nathaniel Branden, Cato Institute, Ed Crane, Libertarianism, Libertarian Party, Roger MacBride, Objectivism, Earl Ravenal, Murray Rothbard
The Nature and Significance of Economic Education, by Israel Kirzner, The Freeman, Oct 1998
Revised version of lecture given 19 March 1998; explains why economic education of both the general public and legislators is needed and why a teacher, such as Mises, must remain scientifically detached even if passionate about the teaching goals

[Even] the casual reader of Mises senses the enormous passion with which he preached the message of the free society and its dependence upon free markets. (See, for example, the almost dramatic closing paragraph of his magnum opus, Human Action ...) ...

The body of economic knowledge is an essential element in the structure of human civilization; it is the foundation upon which modern industrialism and all the ... achievements of the last centuries have been built ... if they ... disregard its teachings and warnings, they will not annul economics; they will stamp out society and the human race.

Human Action, generally considered to be the greatest work of the greatest economist of our times, is a towering monument to the mind of a genius. Its 885 pages of text contain insights that have revolutionized economic thought and are moving the world toward a true and complete understanding of human freedom. ... Human Action is not a book one reads; it is a book one studies. ... in dealing topically with one subject, Professor Mises never overlooked its relation to all others. Hence his convictions on any one topic were spread throughout his book.
Related Topic: Ludwig von Mises

Human Action: A Treatise on Economics
by Ludwig von Mises, 1949
Partial contents: Acting Man - The Epistemological Problems of the Sciences of Human Action - Economics and the Revolt Against Reason - A First Analysis of the Category of Action - Time - Uncertainty - Action Within the World - Human Society
Related Topic: Economics

The introductory paragraph uses material from the Wikipedia article "Human Action" as of 2 Nov 2018, which is released under the Creative Commons Attribution-Share-Alike License 3.0.