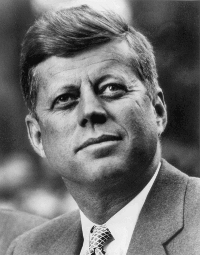 John Fitzgerald "Jack" Kennedy (29 May 1917 – 22 November 1963), commonly referred to by his initials JFK, was an American politician who served as the 35th President of the United States from January 1961 until his assassination in November 1963. He served at the height of the Cold War, and the majority of his presidency dealt with managing relations with the Soviet Union. As a member of the Democratic Party, Kennedy represented the state of Massachusetts in the United States House of Representatives and the U.S. Senate prior to becoming president.

An Anti-Democracy Foreign Policy: Iran, by Jacob Hornberger, 31 Jan 2005
Discusses the history of Operation Ajax, the CIA-led 1953 coup d'état in Iran that removed the democratically elected prime minister Mohammad Mossadegh, and which eventually led to the 1979 Iran hostage crisis

Imagine, for example, that it turned out that a foreign regime had secretly and surreptitiously ousted President Kennedy from office because of his refusal to do the bidding of that foreign regime. What would have been the response of the American people toward that government? Indeed, imagine that the CIA had ousted Kennedy to protect our "national security," given what some in the CIA believed to be Kennedy's "soft-on-communism" mind-set, evidenced, for example, by his refusal to provide air support at the Bay of Pigs, which resulted in the CIA's failure to oust communist Fidel Castro from power in Cuba.
Related Topics: Democracy, Foreign Entanglements, Iran, United States
Is Capitalism Why We Fight?, by Gregory Bresiger, Mises Daily, 6 Apr 2006
Critical review of the theses presented in the 2005 documentary Why We Fight, also inquirying about topics omitted from the film

John Kennedy fought and narrowly won the 1960 campaign on the specious issue of the missile gap. Kennedy and his minions depicted the United States as virtually a helpless giant that had to spend more money on nuclear and conventional arms to keep up with the Soviets. But here was a Three-Card Monte of American politics. The United States was actually far ahead of the Soviets in nuclear capabilities. And, if Kennedy didn't know that on the hustings, which I doubt, he certainly knew it when he became president. Countless books on the Kennedy administration verify this.
Related Topics: Capitalism, Compulsory Education, Dwight D. Eisenhower, Militarism, Military Industrial Complex, Ron Paul, Vietnam War, War, Why We Fight
The J.F.K. Flap, by Murray Rothbard, The Rothbard-Rockwell Report, May 1992
Review of Oliver Stone's JFK, including the media reaction and current theories on the Kennedy assassination

The evidence is now overwhelming that the orthodox Warren legend, that Oswald did it and did it alone, is pure fabrication. It now seems clear that Kennedy died in a classic military triangulation hit ... Many conservatives and libertarians will surely be irritated by one theme of the film: the old-fashioned view of Kennedy as the shining young prince of Camelot, the great hero about to redeem America who was chopped down in his prime by dark reactionary forces. That sort of attitude has long been discredited ... as tales have come out about the sleazy Kennedy brothers, Judith Exner, Sam Giancana, Marilyn Monroe, et al.
Related Topics: Government, JFK
A Lesson from Vietnam, Part 2, by Wendy McElroy, Future of Freedom, Feb 2004
Describes the groups aiming to control South Vietnam from 1956 to 1961, as well as the reactions of the people

In November 1960, John F. Kennedy [was elected] president. Since Diem was considered to be a puppet of Eisenhower, many Vietnamese expected Kennedy to discard him. The revolt that emerged was unsuccessful because Kennedy stood behind Diem, but the fallout from the revolt was important. ... One thing was becoming evident: merely supporting an anticommunist regime did not work. A special task force was created to reassess American policy toward revolutionary movements in the Third World. The definition of 'war' itself had to be re-examined to take into account revolutionary warfare.
Related Topics: Property Rights, Vietnam
A Lesson from Vietnam, Part 3, by Wendy McElroy, Future of Freedom, Mar 2004
Relates key events in Vietnam mostly from the start of the Kennedy in 1961 to the Gulf of Tonkin resolution in 1964, and a few concluding paragraphs on this three part series

Kennedy still resisted sending American troops into Vietnam, comparing the introduction of troops to taking a drink. He told the historian and author Arthur Schlesinger, 'The effect wears off, and you take another.' Schlesinger used the 'quagmire' model to describe Vietnam ... Kennedy decided to link increased military aid to stronger pressure for domestic reforms, including a campaign against government corruption. Diem reacted like a woman scorned ... Diem was murdered on November 1 ... Instability gripped the United States as well, with Kennedy's assassination three weeks later ...
Related Topics: Communism, Foreign Entanglements, Vietnam, Vietnam War
A Libertarian Visits Cuba, Part 1, by Jacob Hornberger, Future of Freedom, May 1999
Reviews Cuban history from their independence war, through the Batista regime, the Castro revolution, the Bay of Pigs invasion and more current events, leading up to a week's visit to Cuba to study their socialist system

In 1960, John F. Kennedy won the presidency. The next year, expecting the Cuban people to rally to their cause, Kennedy authorized the CIA and Cuban exiles to invade Cuba at the Bay of Pigs, with the aim of ousting Fidel Castro from office. The attack failed for three primary reasons: the CIA double-crossed the Cuban invaders by advising Kennedy to deny them air support; Castro's forces were ready ... and the Cuban people were in little mood for another U.S. government-installed ... tyrant ... (The CIA and its Mafia partners [as well as Castro] would ultimately become objects of suspicion in the JFK assassination ...)
Related Topics: Communism, Cuba, Dwight D. Eisenhower, Philippines, Socialism
The U.S. Government Still Tries to Subvert Cuba, by Sheldon Richman, 6 Aug 2014
Comments on the 2014 disclosure that operatives of the U.S. Agency for International Development attempted to incite opposition to the Cuban government

[This] reminds us of some of the U.S. government's most despicable acts during the Cold War. The government made eight attempts on Castro's life and other attempts on the lives of other Cuban leaders. In 1961 the CIA sent 1,500 Cuban exiles to invade Cuba at the Bay of Pigs. That operation, part of the Cuba Project (or Operation Mongoose), failed miserably and embarrassed President John F. Kennedy, who had taken office that year. The U.S. Joint Chiefs of Staff even contemplated having terrorists acts committed on U.S. soil in order to blame Castro and whip up war fever ... (Operation Northwoods). Thankfully, Kennedy vetoed that plan.
Related Topics: Cuba, Barack Obama
Who Killed JFK? The Media Whitewash, by Carl Oglesby, Lies of Our Times, Sep 1991
Examines how several mainstream newspapers and media outlets started criticizing and attacking JFK while the movie was still being made

The conspirators of 1963, Garrison has theorized, grew alarmed at JFK's moves toward de-escalation in Vietnam, normalization of U.S. relations with Cuba, and detente with the Soviet Union. They hit upon a violent but otherwise easy remedy for the problem of JFK's emerging pacifism, Garrison believes, in the promotion by crossfire of Vice President Lyndon Johnson. ... And it was the U.S. Congress, after a year-long, $4 million, expert investigation, that concluded, 'President John F. Kennedy was probably assassinated as a result of a conspiracy.'
Related Topics: JFK, Vietnam War

The introductory paragraph uses material from the Wikipedia article "John F. Kennedy" as of 31 May 2018, which is released under the Creative Commons Attribution-Share-Alike License 3.0.