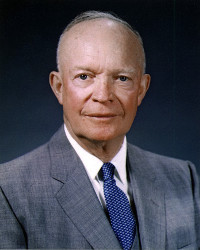 Dwight David "Ike" Eisenhower (14 October 1890 – 28 March 1969) was an American army general and statesman who served as the 34th President of the United States from 1953 to 1961. During World War II, he was a five-star general in the United States Army and served as Supreme Commander of the Allied Expeditionary Forces in Europe. He was responsible for planning and supervising the invasion of North Africa in Operation Torch in 1942–43 and the successful invasion of France and Germany in 1944–45 from the Western Front.

Why We Fight, Himself

Along Pennsylvania Avenue, by Murray Rothbard, Faith and Freedom, Dec 1954
Discusses (a) the world outlook after the 1954 Paris agreements, expressing hope "prospects for continued peace" and (b) the rise in coffee prices, pointing the finger at the Brazilian and U.S. governments

A rather widely accepted myth tells us that at least the Eisenhower Administration practices 'conservatism in economics.' This myth is carefully fostered by the Administration itself. ... A loan ... forces the American taxpayer to subsidize the continued exploitation of himself as a coffee consumer. ... The Eisenhower Administration surpassed its predecessors in taking the subsidy route. In 1953, its export-import bank granted a $300 million loan to Brazil. ... Caught in an election year, the Administration looked for a scapegoat for the towering coffee prices. ... Speculation on the exchange caused the price rise, the Administration said.
Related Topics: Brazil, Germany
Along Pennsylvania Avenue, by Murray Rothbard, Faith and Freedom, Jan 1955
Wonders whether the 84th Congres (1955-56) will be dominated by "liberals" or conservatives, examines the leadership and chairmen of committees in both the House and the Senate, concluding that socialists can't object to Eisenhower "progressive" program

Everybody interested in politics is speculating on the future behavior of the Democratic Congress. ... From the first day after election, it could be seen that President Eisenhower is not worried about the prospects for his legislative program. ... Such measures as these stand out: Increased public housing; socialized medicine in the form of governmental health re-insurance; a $100 billion Federal highway program; pro-union amendments to the Taft-Hartley law; continued deficits and further increases in the national debt; continued foreign aid; and perhaps federal aid to education and increased minimum wages.
Along Pennsylvania Avenue, by Murray Rothbard, Faith and Freedom, Mar 1955
Discusses alternatives to dealing with the 1955 Taiwan Strait crisis and the response in the U.S. Congress and by General MacArthur, the Wolf Ladejinsky case and Federal Government budget estimates

Thus the Eisenhower Administration is pulled in two opposite directions. One force pulls toward a rash interventionist policy that comes close to an all-out 'preventive war' ... The other presses toward some formula for peace and co-existence. ... If President Eisenhower's budget estimates prove correct, the average annual spending by the Federal Government will total $67 billion over his four years in office. President Truman was a New Dealer who didn't promise economy or a balanced budget. The average annual spending of Truman's second term, which includes more years of outright war, amounted only to $47 billion.
Related Topics: China, Taiwan, War
Along Pennsylvania Avenue, by Murray Rothbard, Faith and Freedom, Apr 1956
Draws a scoreboard on the issues between the "Tweedledum-Tweedledee parties" in the 1956 elections, most of the rounds going to the Republicans, then wonders why Ike had only worshippers, but ends by leaving the door open for a Democrat win

The Eisenhower popularity is a fantastic and frightening phenomenon. Never before have we considered it almost a sin to criticize a President sharply. Roosevelt had his worshippers, but many bitter enemies too. Eisenhower has only worshippers. Perhaps the Democrats will try to whittle down the Eisenhower Myth in the campaign, but we doubt it. They have waited too late, hoping he wouldn't run. And so the Democrats will play their only card—Ike's health. And the pitch will be: please America-vote for us for Ike's sake—so he can live out his years in peace and quiet. Vote Democratic to Save Ike!
Related Topics: Democratic Party, Foreign Entanglements, Republican Party
Eisenhower Was Right, by Jacob Hornberger, 16 Feb 2004
Comments on the announcement of a 30,000 person increase in U.S. military, not authorized by Congress, but under "emergency" power by the Secretary of Defense and reflects on the wisdom of Eisenhower's 1961 warning about the military-industrial complex

Combine that kind of military power ... with the enormous economic dependency on military bases ... and you might begin to understand what President Eisenhower meant when he warned the American people back in 1961, "In the councils of government, we must guard against the acquisition of unwarranted influence, whether sought or unsought, by the military-industrial complex. ... Only an alert and knowledgeable citizenry can compel the proper meshing of the huge industrial and military machinery of defense with our peaceful methods and goals, so that security and liberty may prosper together."
Related Topics: Imperialism, Militarism, Military Industrial Complex
Is Capitalism Why We Fight?, by Gregory Bresiger, Mises Daily, 6 Apr 2006
Critical review of the theses presented in the 2005 documentary Why We Fight, also inquirying about topics omitted from the film

The producers ... eulogize Dwight Eisenhower, who spoke of the military industry complex in his farewell speech of January 17, 1961. ... Fair enough, but there are a few caveats. Eisenhower said this after eight years in office in which he had done little to reverse the warfare/welfare state. He was no classical liberal, steeped in the non-interventionist position as enunciated by George Washington. ... Eisenhower ran for president in 1952 as an 'internationalist' who embraced NATO and the whole ridiculous, over expanded, system of military alliances.
Related Topics: Capitalism, Compulsory Education, John F. Kennedy, Militarism, Military Industrial Complex, Ron Paul, Vietnam War, War, Why We Fight
Killing in the Name of Democracy, by James Bovard, Attention Deficit Democracy, 27 Jan 2006
Excerpt from the chapter 4 "Messianic Democracy" of Bovard's Attention Deficit Democracy (2006), details various U.S. presidents' policies and actions from McKinley to Eisenhower

In 1957, [Eisenhower] declared, "We as a nation ... have a job to do, a mission as the champion of human freedom. To conduct ourselves in all our international relations that we never compromise the fundamental principle that all peoples have a right to an independent government of their own full, free choice." Eisenhower was perfectly in tune with the Republican Party platform of 1952, which proclaimed, "We shall again make liberty into a beacon light of hope that will penetrate the dark places. ... The policies we espouse will revive the contagious, liberating influences which are inherent in freedom."
Related Topics: George W. Bush, Democracy, Guatemala, William McKinley, Mexico, Philippines, Franklin D. Roosevelt, Woodrow Wilson, World War I
A Libertarian Visits Cuba, Part 1, by Jacob Hornberger, Future of Freedom, May 1999
Reviews Cuban history from their independence war, through the Batista regime, the Castro revolution, the Bay of Pigs invasion and more current events, leading up to a week's visit to Cuba to study their socialist system

President Eisenhower ordered the CIA to oust Castro from office and install a new puppet ... whose strings could be pulled by Washington. (Eisenhower and the CIA were still "feeling their oats" from what they had accomplished a few years before. In 1954, the CIA had succeeded in overthrowing Jacobo Arbenz, the ... president of Guatemala, an action that plunged Guatemala into a violent civil war that lasted decades and which resulted in the deaths of hundreds of thousands ... If the CIA could overthrow a democratically elected government in Guatemala, why not a self-appointed one in Cuba as well?)
Related Topics: Communism, Cuba, John F. Kennedy, Philippines, Socialism
Q & A with Karen Kwiatkowski, by Karen Kwiatkowski, Brian Lamb, Q&A, 2 Apr 2006
Video and transcript of the C-SPAN program; Lamb interviews Kwiatkowski about the 2003 invasion of Iraq and her participation in the 2005 film Why We Fight

Lamb: More than once you mentioned Dwight Eisenhower. Here's 18 seconds of this speech he gave January 17, 1961, his farewell address ...
EISENHOWER: In the councils of government, we must guard against the acquisition of unwarranted influence, whether sought or unsought, by the military industrial complex. The potential for the disastrous rise of misplaced power exists, and will persist ...
Kwiatkowski: ... what's strange and compelling is that Eisenhower said [that] in 1961, so he must have seen something ... from his perspective ... And I think it's come true, just as he predicted.
Related Topics: Attacks of 11 September 2001, George W. Bush, Iraq War, Military Industrial Complex, Republican Party, Why We Fight
TANSTAAFL, There Ain't No Such Thing as a Free Lunch, by David R. Henderson, 3 Mar 2014
Explains the two meanings of TANSTAAFL: the scarcity of economic resources (and the need for tradeoffs) and the expectation of some kind of reciprocity when something is offered for "free"

By contrast, there was a U.S. President earlier in the 20th century who did a much better job of recognizing tradeoffs. Indeed, the speech in which he did so is famous, probably in part because it is so rare to see a president, especially one who made his reputation fighting World War II, recognize the tradeoffs involved in spending more on the military. In a speech early in his first term in office, President Dwight D. Eisenhower stated: "The cost of one modern heavy bomber is this: a modern brick school in more than 30 cities. ... We pay for a single destroyer with new homes that could have housed more than 8,000 people."
Related Topics: Economic Resources, Government, Robert A. Heinlein, No Free Lunch, Barack Obama
The Threat of Militarism, by Karen Kwiatkowski, 9 Jul 2006
Presentation to Global Scholar seminar, Washington and Lee University, Lexington, Virginia; discusses "the nature of modern United States foreign policy" while reflecting on what Eisenhower, Smedley Butler and Mark Twain said and wrote

In terms of our democracy — Eisenhower reminded us to remain alert to our government actions and directions, lest those actions and direction be hijacked by what he referred to as the "scientific-technical elite." ... Ike, of course, as one of the best loved and respected Presidents, had the most power to communicate his ideas ... in insulting the Congress, military and industrial complex — the scientific technical elite, Ike picked a time where this challenge would not be able to be countered effectively by the defenders of the military-industrial complex or the Congress.
Related Topics: Attacks of 11 September 2001, Democracy, Founding Fathers, Iraq War, Learning, Militarism, Military Industrial Complex
Why We Fight, by Justin Raimondo, 1 Feb 2006
Detailed review of the 2005 documentary Why We Fight

... President Dwight Eisenhower's famous farewell speech ... warns against the rising danger of militarism as an economic system and a mindset: "This conjunction of an immense military establishment and a large arms industry is new in the American experience. The total influence – economic, political, even spiritual – is felt in every city, every state house, every office of the federal government ... we must not fail to comprehend its grave implications ... In the councils of government, we must guard against the acquisition of unwarranted influence, whether sought or unsought, by the military-industrial complex. ..."
Related Topics: Attacks of 11 September 2001, Militarism, Military Industrial Complex, Why We Fight, World War II

The introductory paragraph uses material from the Wikipedia article "Dwight D. Eisenhower" as of 30 May 2018, which is released under the Creative Commons Attribution-Share-Alike License 3.0.