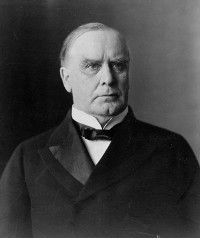 William McKinley (29 January 1843 – 14 September 1901) was the 25th President of the United States, serving from 4 March 1897 until his assassination in September 1901, six months into his second term. McKinley led the nation to victory in the Spanish–American War, raised protective tariffs to promote American industry and maintained the nation on the gold standard in a rejection of free silver (effectively, expansionary monetary policy).

President William McKinley proclaimed that, in the Philippines, the U.S. occupation would "assure the residents in every possible way [the] full measure of individual rights and liberties which is the heritage of a free people substituting the mild sway of justice and right for arbitrary rule." McKinley also promised to "Christianize" the Filipinos, as if he did not consider the large number of Filipino Catholics to be Christians. McKinley was devoted to forcibly spreading American values abroad at the same time that he championed high tariffs to stop Americans from buying foreign products.
Related Topics: George W. Bush, Democracy, Dwight D. Eisenhower, Guatemala, Mexico, Philippines, Franklin D. Roosevelt, Woodrow Wilson, World War I
The Spanish-American War: The Leap into Overseas Empire, Part 1, by Joseph R. Stromberg, Freedom Daily, Dec 1998
Describes the political and other forces that led to the Spanish-American War, the military actions in Cuba and the Philippines and the immediate aftermath

Ohio governor William McKinley emerged as the leader of a sophisticated group of Republican statesmen who backed an integrated program of neomercantilism to restore and sustain prosperity. ... In the election of 1896, McKinley easily defeated populist Democrat William Jennings Bryan, who called for unlimited, inflationary coinage of silver and for tariff reduction. As it took office, the new administration confronted the popular Cuban revolution against Spanish rule, which had broken out in 1895. ... In early April 1898, with Spain still reluctant to quit Cuba, McKinley asked Congress for a declaration of war.
Related Topics: Cuba, Imperialism, Philippines, Spain

The introductory paragraph uses material from the Wikipedia article "William McKinley" as of 30 May 2018, which is released under the Creative Commons Attribution-Share-Alike License 3.0.