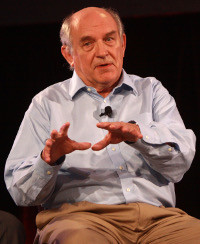 Charles Alan Murray (born 8 January 1943) is an American political scientist, author and columnist. His book Losing Ground: American Social Policy 1950–1980 (1984), which discussed the American welfare system, was widely read and discussed, and influenced subsequent government policy. He became well-known for his controversial book The Bell Curve (1994), written with Richard Herrnstein, in which he argues that intelligence is a better predictor than parental socio-economic status or education level of many individual outcomes including income, job performance, pregnancy out of wedlock and crime, and that social welfare programs and education efforts to improve social outcomes for the disadvantaged are largely wasted.

Charles Murray, an American political scientist and nonacademic researcher, received his doctorate in political science from the Massachusetts Institute of Technology in 1974, but is unusual among influential American social scientists in having done all his work outside academia, from berths at private think tanks ... Losing Ground, Murray's first widely read work, contained data and analysis that questions the wisdom and efficacy of what many consider the American government's most significant success in the late 20th century—the array of welfare programs associated with the "Great Society" and the years following.
Related Topics: Pursuit of Happiness, Libertarianism

Murray (b. 1943) first made a name for himself by changing the terms of debate on poverty, and he went on to significantly deepen our understanding about liberty. ... He earned his B.A. at Harvard and his Ph.D. at the Massachusetts Institute of Technology. After eight years with the Manhattan Institute, he joined the American Enterprise Institute. ... Murray, a former Peace Corps volunteer, viewed welfare as a tragedy. He analyzed extensive data which documented how welfare created perverse incentives to break up families, and as a consequence it perpetuated poverty and promoted crime.

Best-selling author and policy analyst Charles Murray has written some of the most hotly-debated and influential social policy books of recent decades. Losing Ground: American Social Policy 1950-1980 (1984) devastated the case for the welfare state by showing that it was not only ineffectual, it actually left the poor worse off than ever before. It is, and remains, one of the most important and influential policy books of our generation. ... A witty and insightful writer and speaker, Murray has been a guest on most major TV talk shows. He is Bradley Fellow at the American Enterprise Institute.
Charles Murray | AEI Scholar
Includes photograph, policy areas covered, biographical/bibliographical summary, experience and education

A political scientist, author, and libertarian, he first came to national attention in 1984 with the publication of "Losing Ground," which has been credited as the intellectual foundation for the Welfare Reform Act of 1996. His 1994 New York Times bestseller "The Bell Curve" ... coauthored with the late Richard J. Herrnstein, sparked heated controversy for its analysis of the role of IQ in shaping America's class structure. ... His most recent book, "By the People: Rebuilding Liberty Without Permission" ... urges Americans to stem governmental overreach and use America’s unique civil society to put government back in its place.

As publications director at the Manhattan Institute in the early 1980s, she shepherded a new book on welfare policy by a virtually unknown writer she had discovered named Charles Murray – a book called Losing Ground – from manuscript to national bestseller.
Related Topics: Roy Childs, Foundation for Economic Education, Barry Goldwater, Joan Kennedy Taylor
Is Free Speech in the US Doomed?, by Lindsay Marchello, 9 Nov 2017
Discusses events at various universities where protesters, equating mere speech with (physical) violence, responded violently to speakers or their sponsors, prevented the talks from being made or otherwise disrupted them

Protesters have already taken this approach, as was the case in March when Charles Murray, an American Enterprise Institute scholar, attempted to speak at Middlebury College. Allison Stranger, a professor of politics and economics and a moderator for the event, was seriously hurt when protesters tried to prevent the event from moving to a new venue after earlier protests successfully disrupted it. Protesters may have truly believed that Murray's views on race equated to violence on marginalized communities and, therefore, justified using violent actions to stop him from sharing his views. Murray's opinions are not violence, and neither are the demonstrably more vile views ...
Related Topics: John Milton, Freedom of Speech
A Man, a Plan, a Flop, by David Gordon, Mises Daily, 23 Apr 2006
Critical review of Murray's In Our Hands: A Plan to Replace the Welfare State (2006)

Charles Murray, by his own account, should not have written In Our Hands. He identifies a genuine problem; but he himself shows that his plan to solve it is either useless or inferior to a better plan ... Murray surprisingly agrees that a laissez-faire policy is better ... [but he] rejects the libertarian approach because it is unacceptable to the American public ... [and] also thinks that his own plan exceeds the bounds of political possibility ... If we seek an answer to Murray's preoccupation with an inferior and politically impossible idea, the answer is not far ... It transpires that he is not really a libertarian at all ...
Related Topics: Milton Friedman, Health Care, Libertarianism, Taxation
What It Means to Be a Libertarian [PDF], by Randolph J. May, Cato Journal, 1997
Review of Charles Murray's book What It Means to Be a Libertarian (1997), contrasting it with Tocqueville's writings in Democracy in America (1835-1840)

Whether one agrees with him or not, Murray is not serving up a watered-down brand of libertarianism. While Murray credits a number of noteworthies for influencing his thinking in his "Sources and Acknowledgments," from Adam Smith and John Stuart Mill to Milton Friedman and F.A. Hayek, I submit he owes a large unacknowledged debt to Alexis de Tocqueville ... Murray does not flinch from applying his "hands off" philosophy even to anti-discrimination laws, which he concedes to be a use of government which appears to be good ... Tocqueville surely would be pleased if Murray's book moves us at least a little in the classical libertarian direction.
Related Topics: Democracy, Limited Government, Libertarianism, Moral Liberty, Personal Responsibility, Alexis de Tocqueville

The Bell Curve: Intelligence and Class Structure in American Life
by Richard Herrnstein, Charles Murray, 1994
Partial contents: I: The Emergence of a Cognitive Elite - Steeper Ladders, Narrower Gates - II: Cognitive Classes and Cognitive Behavior - Unemployment, Iddleness and Injury - III: The National Context - IV: Living Together - Raising Cognitive Ability
Human Accomplishment: The Pursuit of Excellence in the Arts and Sciences, 800 B.C. to 1950, 2003
Contents: Introduction - One: A Sense of Accomplishment - Two: Identifying the People and Events That Matter - Three: Patterns and Trajectories - Four: On the Origins and Decline of Accomplishment - Appendices
Related Topic: Achievement
In Pursuit of Happiness and Good Government, Oct 1988
Partial contents: One: "The Happiness of the People" - Measuring Success in Social Policy - Two: When There is Bread - Enabling Conditions and Thresholds - Three: Toward the Best of All Possible Worlds - Policy and the Idea of Man
Related Topic: Pursuit of Happiness
Losing Ground: American Social Policy, 1950-1980, 1984
Partial contents: I: A Generous Revolution - The Kennedy Transition - II: Being Poor, Being Black: 1950-1980 - Poverty - Employment - Education - Crime - The Family - III: Interpreting the Data - Incentives to Fail - IV: Rethinking Social Policy
What It Means to Be a Libertarian: A Personal Interpretation, 1997
Partial contents: I: The Framework - An Image of Limited Government - II: How Would It Work? - Removing Government from Economic Life - Removing Government from Civil Life - III: Is It Possible? - Government as "Them" - The Demand to Be Left Alone
Related Topic: Libertarianism

The introductory paragraph uses material from the Wikipedia article "Charles Murray (political scientist)" as of 7 Aug 2018, which is released under the Creative Commons Attribution-Share-Alike License 3.0.