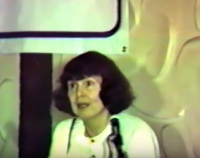 Joan Kennedy Taylor (21 December 1926 – 29 October 2005) was an American journalist, author, editor, public intellectual and political activist. She is best known for her advocacy of individualist feminism and for her role in the development of the modern American libertarian movement.

Association of Libertarian Feminists, National Coordinator, 1989-2005
Eris Society, 1993, "Why Libertarians Should be Feminists"

Advocates for Self-Government - Libertarian Education: Joan Kennedy Taylor (1926-2005)
Includes picture, biography, quote from her and memorial quotes from other libertarians

Joan Kennedy Taylor was one of the matriarchs of the 'individualist feminist' movement. She also played an important role in the development of the modern libertarian movement, and was an associate, mentor, and friend to many prominent libertarians, including Ayn Rand, Charles Murray, and Roy A. Childs, Jr. ... Starting in the early 1970s, Talyor became interested in feminism ... Along with similarly minded feminists like Wendy McElroy and Sharon Presley, Taylor long argued that American feminism began in the 19th century as a 'classical liberal' movement that sought to strike down the chains of government that held women back.
Feminists for Free Expression: Speakers Network
Includes profile, photograph and topic on which she gave talks

Joan Kennedy Taylor is the author of SEXUAL HARASSMENT: a Non-Adversarial Approach (2002); Reclaiming the Mainstream: Individualist Feminism Rediscovered (1992); a pamphlet, 'Women's Issues: Feminism, Classical Liberalism, and the Future,' in the Essays in Public Policy Series of the Hoover Institution (1993); articles in the Stanford Law and Policy Review special issue on Gender, Law and Politics, and the communications law journal, Commlaw Conspectus. She has directed book programs for the Manhattan Institute and the Foundation for Economic Education, was an editor of the Libertarian Review and The Freeman ...

Joan Kennedy Taylor died on Saturday, October 29, 2005 in New York City. ... Throughout the 1980s, she was ... a regular commentator on current issues and events on the nationally syndicated daily radio program Byline. ... Reclaiming the Mainstream: Individualist Feminism Rediscovered (1992) elaborated her theory that the true origins of American feminism lay in the mid-19th century, when men and women of the 'classical liberal' persuasion, many of them also involved in the abolitionist movement, began calling for an end to government policies that held women back.
Related Topics: Roy Childs, Foundation for Economic Education, Barry Goldwater, Charles Murray
Joan Kennedy Taylor, by Jeff Riggenbach, 14 Jan 2011
Biographical essay, including a review of Taylor's book Reclaiming the Mainstream: Individualist Feminism Rediscovered; transcript of "The Libertarian Tradition" podcasts of 28 Dec 2010 and 12 Jan 2011

Joan Kennedy Taylor first became involved in the libertarian movement in the early 1960s, when she was a student at the Nathaniel Branden Institute in New York City. As a student of Objectivism, she espoused the political views of Ayn Rand: the nonaggression principle, natural rights, a free market, and a state so minimal that it had no power to tax and had to raise its revenues by charging fees for its services or, perhaps, running a national lottery. Taylor was in her early 30s when she adopted these political views; before that time, she seems to have been pretty much apolitical.
Related Topics: Association of Libertarian Feminists, Cato Institute, Roy Childs, The Freeman, William Lloyd Garrison, Libertarianism, Libertarian Party, Right to Petition the Government, Ayn Rand
Libertarian Feminism: An Honorable Tradition, by Sharon Presley, 2 Dec 2014
Traces the feminist tradition from individualist anarchists in the 18th, 19th and early 20th century, to the creation in 1973 of the Association of Libertarian Feminists and on to present activism

In 1992 libertarian feminist Joan Kennedy Taylor (1924-2005) published the book Reclaiming the Mainstream: Individualist Feminism Rediscovered, a history of individualist feminism in the US that showed that the feminist tradition in the US was largely individualist in the 19th century. Her book What to Do When You Don't Want to Call the Cops: A Non-Adversarial Approach to Sexual Harassment was published in 1999 with Cato sponsorship.
Related Topics: Association of Libertarian Feminists, Voltairine de Cleyre, Benjamin Tucker
The Power of Persuasion, by Jeff Riggenbach, Mises Daily, 20 May 2011
Historical account of the Persuasion magazine, edited by Joan Kennedy Taylor between Sept 1964 and May 1968

Sometime during the first year of the magazine's publication, Rand let Joan know that she admired her work on Persuasion. As Joan later recalled, "She told me, 'You're a good editor. ... I can tell that because [an editor of a small publication like Persuasion] might have just one or maybe two good writers, but all of your writers are good and that means the editor's good.'" ... This was an opportunity. Joan saw it and took it. She established an independent corporation, Persuasion, Inc., and took over the magazine from the Metropolitan Young Republican Club.
Related Topics: Conservatism, The Freeman, Milton Friedman, Objectivism, Ayn Rand, Ronald Reagan, Republican Party, Murray N. Rothbard
Review of Persuaded by Reason — Foreword Reviews, by Sara Budzik, 6 Oct 2014
Review of Riggenbach's Persuaded by Reason: Joan Kennedy Taylor and the Rebirth of American Individualism (2014)

... Joan herself having been a writer, editor, artist, and participant in the social movements that identified individualism with libertarian politics. ... With a country dealing with the Great Depression and World War II and Joan dealing with an overbearing mother and a tendency to argue with her teachers, both the young girl and the country she lived in were ready for change and independence in the 1950s. ... During her first marriage, Joan struggles with the excitement and disorganization of the bohemian lifestyle she lived with Donald Cook, much the way America was struggling with the Beat Generation ...
Related Topic: Jeff Riggenbach
The Story of Roy A. Childs Jr. (1949–1992), by Jeff Riggenbach, 21 Jan 2011
Biographical essay; transcript of "The Libertarian Tradition" podcast of 12 Jan 2011

[It] would have to be a Randian who could pull his own weight. Or her own weight. Now there was an idea! But where was there a female Randian who was knowledgeable about current issues and events, could write, and could be tolerant of Rothbardian anarchists? There was Joan Kennedy Taylor, of course. But she hadn't written anything on current issues and events in ten years. And would she be tolerant of the Rothbardians? Well, there could be no harm in trying ... By the time of his first issue in July 1977, he had Joan Kennedy Taylor on his masthead as an associate editor along with the Rothbardians.
Related Topics: Roy Childs, Laissez Faire Books, Robert LeFevre, Liberty International, Objectivism, Ayn Rand, Murray N. Rothbard

America's Overprotective Sexual Harassment Law, Investor's Business Daily, 6 Apr 2000
Discusses how sexual harassment legislation in workplaces is not an appropriate solution and suggest of dealing with the actual problems

We are letting something destructive happen to American business in the name of helping women. Current sexual harassment law — that is, the extension of anti-discrimination law to stifle and punish sexual speech in the workplace — is creating the very hostility between the sexes that it purports to correct ... Government not only should not be relied on in social situations, it cannot be relied on. Women can learn what to expect and how to handle it, and in so doing will not only better protect themselves but will also feel the satisfaction that comes from being effective personally as well as professionally.
Related Topics: Law, Society, Freedom of Speech
Childs, Roy A. (1949-1992), The Encyclopedia of Libertarianism, 15 Aug 2008
Biographical essay

Roy A. Childs, Jr., a self-taught writer and speaker, was a major influence in the libertarian movement during the 1960s and 1970s. He is perhaps best known for his work as editor of The Libertarian Review (1977–1981) and as the primary reviewer for Laissez Faire Books from 1984 to 1992 ... He died in a hospital in Miami, Florida, where he had gone for a weight‐​loss program, on May 22, 1992. Since then, the Cato Institute has established a Roy Childs Library in its Washington headquarters, and his personal papers are archived in the Hoover Institution for War and Peace Studies at Stanford University.
Related Topics: Roy Childs, Cato Institute
The New Witchcraft, Free Inquiry, 2002
Discusses the Child Pornography Prevention Act of 1996, after the Supreme Court in Oct 2001 heard the case against it, but before it rendered its judgement in Apr 2002

What does a society do about people who have evil thoughts? If it's a religious society, it punishes them. Our secular society, however, in its most essential document recognizes the importance of both freedom of religion and freedom of speech, and the link between them. ... But to define a class of expressive material as so terrible that even its temporary possession taints a person irrevocably is to believe in witchcraft. If the Court decides that material deemed to be inciting in this way can be, indeed, must be illegal under all circumstances, how long will unpopular political speech be safe?
Related Topics: Children, Freedom of Speech
Protecting Opinions That We Loathe, First Amendment Cyber-Tribune, Jan 1997
Argues against the 1996 Child Pornography Prevention Act (which was overturned in 2002 by the Supreme Court for being too broad)

Throughout history, whenever technology makes the dissemination and exchange of information easier, it has been accompanied by calls for censorship. Today, the exponential growth of cable television and the Internet is accompanied by powerful censors in high places. ... We all should be protected from crime, of course, but moving from trying to protect actual children from harm to trying to punish the possessors of 'nasty material' could be the opening wedge in an assault on the most valuable foundations of our civilization. If a man uses a picture to seduce a child, punish the man for that act, not the picture.
Related Topics: Children, Freedom of Speech

Liberty Against Power: Essays by Roy A. Childs, Jr.
by Roy Childs, Thomas Szasz (foreword), Joan Kennedy Taylor (editor), 1 Dec 1994
19 essays on political philosophy, policy analysis and book and music reviews; topics include capitalism, objectivism, libertarianism, property rights, the draft and the war on drugs
Related Topic: Liberty
What to Do When You Don't Want to Call the Cops: A Non-Adversarial Approach to Sexual Harassment, 1999
Partial contents: What Sexual Harassment Is and Isn't: History and the Law - A Failure to Communicate - Sticks and Stones - Seeing Sex as Dirty - Pictures That Embarrass - What's Wrong with Sexual Harassment Law - Towards a Feminist Theory of Training

The introductory paragraph uses material from the Wikipedia article "Joan Kennedy Taylor" as of 31 May 2018, which is released under the Creative Commons Attribution-Share-Alike License 3.0.