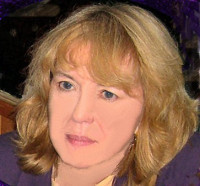 Our purpose is to help you:
- become more critical about what you see and hear
- question your irrational assumptions
- strengthen your rational beliefs
- avoid beliefs traps that limit your options
- apply critical thinking in your everyday life
- encourage critical thinking in others
Sharon Presley
Personal website, includes profile page, list of published works, topics on which she talked, and a journal covering events from April 2007 to June 2012
Voltairine de Cleyre Home Page
Website of the Voltairine de Cleyre Society; includes biography page, text of many of her essays, information on Presley's book about Cleyre and links to recommended resources
Related Topic: Voltairine de Cleyre

Dr. Sharon Presley has a Ph.D. in social psychology from the City University of New York Graduate Center where her mentor was Dr. Stanley Milgram, author of the classic study, Obedience to Authority. Her Ph.D. dissertation was a study of political resisters to authority. She recently retired from teaching psychology and critical thinking courses at California State University, East Bay in Hayward. ... Dr. Presley's practical book on dealing with authority, Standing Up to Experts and Authorities: How to Avoid Being Intimidated, Manipulated, and Abused, was published by Solomon Press on May 5, 2010.
Advocates for Self-Government - Libertarian Education: Sharon Presley - Libertarian
Includes photo, biographical profile and quote

Sharon Presley is the co-founder of the largest and most successful libertarian book-selling enterprise in the world — Laissez Faire Books. She launched the company in 1972 with John Muller to make hard-to-find books available to readers ... From 1972 to 1977, Presley was editor of the company's book review/catalog, Laissez Faire Review ... Presley is a founding member of the Association of Libertarian Feminists, and from 1975 to 1982 was its national coordinator. She also served as executive director of the nonprofit organization, Resources for Independent Thinking (RIT).
Related Topic: Laissez Faire Books
FIOAR - Contributor Biographies
List of contributors to Feminist Interpretations of Ayn Rand, each with a short biographical profile

SHARON PRESLEY received her Ph.D. in social psychology from the City University of New York. She has taught psychology of women and other gender-related courses at California State University, Iowa State University, the College of Wooster, and Weber State College. Her published research includes a study of political resisters to authority, historical papers on women resisters, and a study of Mormon feminists. She is Executive Director of Resources for Independent Thinking, a nonprofit educational organization, and is working on two books ..

The following article ... was an attempt to reach out to women who were dissatisfied with other organized women's groups.

... "Libertarian feminists believe that all social interactions should be voluntary, ... that individuals have the right to live their lives in any manner they see fit as long as they don't initiate force or fraud," says ... Presley ... "Libertarians want to repeal laws, not pass them," Presley continues. "They are not interested in stopping people from smoking pot, having abortions, or from spending their money as they see fit. Libertarians just want to leave people alone." ...

Related Topics: Association of Libertarian Feminists, Socialism, The State
Sharon Presley - Hero of the Day, The Daily Objectivist, 2000
Discusses Presley's role as founder and executive director of Resources for Independent Thinking and her earlier role as co-founder and co-proprietor of Laissez Faire Books

A passionate libertarian writer, speaker and activist since 1964, Sharon Presley was the co-founder and co-proprietor, with John Muller, of Laissez Faire Books; and editor of their flagship publication, Laissez Faire Review, from 1972 to 1977 ... Sharon is also a professor who has lectured and written widely on scholarly themes. Her research includes the study of political resisters to authority, women resisters, and Mormon feminists ... As director of Resources for Independent Thinking, Sharon is fighting a battle for greater respect for—and more consistent practice of—the virtues of rationality and reasonableness.
Related Topic: Laissez Faire Books

Étienne de La Boétie was a French political theorist and author of the Discourse of Voluntary Servitude. ... Although Rothbard considers his tone pessimistic—La Boétie believed people have come to love their servitude—he sees a note of hope in the essay. People become used to servitude; once it is thrown off and the bulwark of habit removed, tyranny may be difficult to reestablish. The masses may not be willing, but a few clear thinking individuals may save it: 'Even if liberty had entirely perished from the earth, such men would invent it.'
Related Topics: Étienne de La Boétie, Nonviolent resistance
Libertarian Feminism: An Honorable Tradition, 2 Dec 2014
Traces the feminist tradition from individualist anarchists in the 18th, 19th and early 20th century, to the creation in 1973 of the Association of Libertarian Feminists and on to present activism

By the 1970s only a handful of libertarian women and men spoke out on libertarian feminist ideas, its heritage seemingly forgotten. However Tonie (Theodora) Nathan (1923-2014), an Oregon journalist, changed that. In 1973, she founded the Association of Libertarian Feminists (ALF) in her hometown of Eugene, Oregon. At the Libertarian Party Convention in New York City in 1975, the national ALF group was founded. Its website came along in 1997. ... As ALF's Executive Director, I am pleased to report that ALF continues its activism today with a Facebook page, newsletters, essays, a blog, and a YouTube Channel, which will soon have new interviews.
Related Topics: Association of Libertarian Feminists, Voltairine de Cleyre, Joan Kennedy Taylor, Benjamin Tucker
Voltairine de Cleyre | Libertarianism.org, Libertarian Review, Mar 1979
Biographical essay, discussing Cleyre's life, views on anarchism and marriage, and contrasting her to Emma Goldman

The introductory paragraph uses material from the Wikipedia article "Sharon Presley" as of 14 May 2018, which is released under the Creative Commons Attribution-Share-Alike License 3.0.