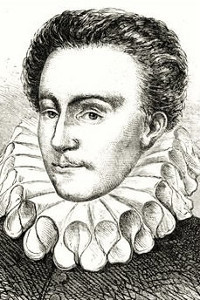 Étienne or Estienne de La Boétie (1 November 1530 – 18 August 1563) was a French judge, writer, and "a founder of modern political philosophy in France". He is best remembered as the great and close friend of the eminent essayist Michel de Montaigne "in one of history's most notable friendships".

Étienne de La Boétie was a French political theorist and author of the Discourse of Voluntary Servitude. He received his law degree from the University of Orléans in 1553, and the heady atmosphere of free inquiry that persisted there provided an inspiring milieu for La Boétie, who wrote this essay there at the age of 21. The Discourse so impressed essayist Michel de Montaigne that he sought out La Boétie in 1559; they remained good friends until La Boétie's untimely death. Although La Boétie never penned another comparable political piece, he wrote poetry and was a distinguished judge and diplomatic negotiator.
Related Topic: Nonviolent resistance

Our two main objectives in creating these pages have been, first of all, to offer reliable information concerning La Boétie – his life and works. Secondly, it has been our wish to present this information in a way that is accessible to all persons that wish to learn more about the man and his writings.

Étienne de La Boétie | Libertarianism.org
Includes links and short summaries to essays about La Boétie and an excerpt from Part I of the Harry Kurz translation of the "Discourse"

Étienne de La Boétie was a French jurist, poet, and political theorist who is best remembered as the subject of Michael de Montaigne's essay 'Of Friendship' and for his own essay 'The Discourse on Voluntary Servitude.'
Etienne de la Boétie | Mises Institute
Includes biography, picture and, links to the text as well as audio recordings of La Boétie's "Discourse"

Étienne de La Boétie (1530–1563) is one of the seminal political philosophers, not only as a founder of modern political philosophy in France but also for the timeless relevance of many of his theoretical insights.
Etienne de la Boétie - Online Library of Liberty
Includes portrait, links to two versions of the Discourse and the complete works in French

Estienne de la Boétie (1530-1563) was a friend of Montaigne and made a name for himself with his poetry and translations of ancient Greek authors. He is perhaps better known today for his essay 'Discourse of Voluntary Servitude' where he explores why the majority too often willingly capitulates to the demands of a tiny ruling minority.
Étienne de la Boétie | People | Foundation for Economic Education
Includes short profile, picture and link to the "Discourse on Voluntary Servitude"

Étienne de La Boétie (1530-1563) was a French judge, writer, and a founder of modern political philosophy in France. He is best remembered as the great and close friend of the eminent essayist Michel de Montaigne, in one of history's most notable friendships.

La Boétie (pronounced La Bwettie) was particularly interested in why people obey. He asked, 'If a tyrant is one man and his subjects are many, why do they consent to their own enslavement?' La Boétie did not believe that the state ruled primarily through force. ... La Boétie acquired his renown on the basis of one short essay that argued tyranny is 'automatically defeated' when people refuse to consent to their own enslavement. ... Born into an affluent and politically connected family, La Boétie escaped the illiteracy, misery, and disease that befell most of his countrymen.
Related Topics: France, Discourse on Voluntary Servitude
Étienne de La Boétie, Part 2, by Wendy McElroy, Freedom Daily, May 2003
Examines major themes in La Boétie's "Discourse": custom (habit), control of information, buying off the people and withdrawal of consent

At the young age of 33, La Boétie died in the arms of his friend Montaigne, who was moved by the event to write his famous essay 'On Friendship.' ... And it is mainly through this essay that the larger world knows of Étienne de La Boétie. ... If La Boétie is right, ... then nature itself argues the logic of not cooperating with tyranny. There is something within man and beast that resists the tension of a leash. Rather than break the tension by attacking those who hold the reins, La Boétie told people to let the tension go slack. People should refuse either violence or submission. They should simply say No.
Related Topics: Compulsory Education, Freedom of the Press, Taxation, Discourse on Voluntary Servitude
The People Say No to War, by Sheldon Richman, The Goal Is Freedom, 13 Sep 2013
Comments on how the American people, through calls and emails to Congress and opinion polls, stopped, at least momentarily, the Obama administration from going to war with Syria

Étienne de La Boétie, the 16th-century French political philosopher, pointed out what should be obvious: the ruled always outnumber their rulers. In ... The Discourse of Voluntary Servitude, he asked, "how it happens that so many men, so many villages, so many cities, so many nations, sometimes suffer under a single tyrant who has no other power than the power they give him; who is able to harm them only to the extent to which they have the willingness to bear with him; who could do them absolutely no injury unless they preferred to put up with him rather than contradict him. Surely a striking situation! ..."
Related Topics: United States Constitution, Barack Obama, War
The Politics of Étienne de La Boétie, by Murray N. Rothbard, 1975
Introduction to the 1975 edition of The Politics of Obedience: The Discourse of Voluntary Servitude, translated by Harry Kurz; summarizes the key insights of La Boétie's work

Étienne de la Boétie was born in Sarlat, in the Périgord region of southwest France, in 1530, to an aristocratic family. His father was a royal official of the Périgord region, and his mother was the sister of the president of the Bordeaux Parlement (assembly of lawyers) ... La Boétie was also the first theorist to move from the emphasis on the importance of consent to one on the strategic importance of toppling tyranny by leading the public to withdraw that consent. Hence, La Boétie was the first theorist of the strategy of mass, nonviolent civil disobedience of State edicts and exactions.
Related Topics: Anarchism, Communism, Libertarianism, Liberty, Nonviolent resistance, Political philosophy, Lysander Spooner, The State, Taxation
Socialism: Illegitimate, Not Just Inefficient, by Gary North, 15 May 2001
Discusses two aspects in the criticism of socialism: whether it is efficient compared to capitalism (according to the theory of value-free economics) and whether it is immoral (or contrary to human nature)

In a recent essay on the sixteenth-century author, Etienne de la Boetie, Robert Klassen highlights several passages from [La Boetie]'s book, ... Discourse of Voluntary Servitude. [La Boetie] believed that the State's use of redistributed wealth was the basis of its authority ... Men's acceptance of this moral claim has been the basis of their willingness to submit voluntarily to the State. [La Boetie] fully understood that if all men refused to cooperate with the State's agents except under threat of immediate violence, no civil ruler could enforce his claims beyond his immediate surroundings.
Related Topics: James Bovard, Free Market, F. A. Harper, Ludwig von Mises, Murray N. Rothbard, Socialism
Subjugating Ourselves, by Sheldon Richman, The Goal Is Freedom, 7 May 2010
Examines key passages from La Boetie's Discourse on Voluntary Servitude and criticizes newspaper editorial writers (with a recent example) for preaching to the people to acquiesce and submit to government

In The Politics of Obedience: The Discourse of Voluntary Servitude, the sixteenth-century French poet, judge, and political philosopher Étienne de La Boétie ... was establishing the undeniable but overlooked truth that in any political system the ruled vastly outnumber the rulers. Brute force cannot be the key to maintaining despotism because the subjects always hold the potential to overwhelm the prince ... Well, La Boétie wanted to know how the multitude is held in check by the ruling clique when they had it in their power to refuse. He concluded that habit has a lot to do with it ...
Related Topics: Democracy, Government, Alexis de Tocqueville, Discourse on Voluntary Servitude
Why We Consent to Oppression: Self-suppression paves the way for political suppression, by Peter Breggin, Reason, Sep 1977
Examines the questions posed by La Boétie in his "Discourse" from a psychological perspective, particularly how childhood self-suppression leads most adults to more easily accept government oppression

"Why in the world do people consent to their own enslavement?" asks Murray Rothbard in his introduction to a new edition of Etienne [de] La Boetie's The Politics of Obedience. Rothbard is not posing a new question but is summing up La Boetie's dismay over the individual's willingness to submit to tyranny. La Boetie's classic was written more than four centuries ago, but the question it raises has seldom been answered to anyone's satisfaction. By focusing upon the cowardly failure of the individual, La Boetie shifts his political inquiry into the realm of psychology.
Related Topics: Children, For a New Liberty, Libertarianism, Individual Liberty, Objectivism, Murray N. Rothbard, Self-Esteem, Thomas Szasz

The introductory paragraph uses material from the Wikipedia article "Étienne de La Boétie" as of 30 May 2018, which is released under the Creative Commons Attribution-Share-Alike License 3.0.