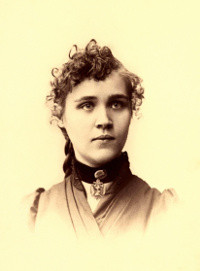 Voltairine de Cleyre (17 November 1866 – 20 June 1912) was an American anarchist, known for being a prolific writer and speaker, and opposing state capitalism, the state itself, marriage and the domination of religion over sexuality and women's lives. She began her activist career in the freethought movement. De Cleyre was initially drawn to individualist anarchism but evolved through mutualism to an "anarchism without adjectives", prioritizing a stateless society without the use of force above all else. She was a contemporary of Emma Goldman, with whom she maintained a relationship of respectful disagreement on many issues. Many of her essays were in the Selected Works of Voltairine de Cleyre, published posthumously by Mother Earth in 1914.

Charles Johnson on his Many Publications, Libertarian Feminism and Anarchic Individualism, by Charles W. Johnson, Anthony Wile, The Daily Bell, 29 Apr 2012
Topics include the Markets Not Capitalism anthology, some of his essays, his family, his work with Alliance of the Libertarian Left, war, constitutions, feminism, unions, the United States, Murray Rothbard, Austrian economics and the future

Voltairine de Cleyre is one of the most brilliant writers in the 19th/early 20th century libertarian tradition – a really provocative and constantly experimental thinker about the nature of freedom, and the author of some really important essays on libertarian feminism. There are some excellent recent collections of her writing, in particular The Voltairine de Cleyre Reader (from AK Press, ed. A. J. Brigati) and Exquisite Rebel: The Essays of Voltairine de Cleyre – Anarchist, Feminist, Genius (from SUNY Press, eds. Crispin Sartwell and Sharon Presley).
Related Topics: Mary Ruwart, War
Gertrude B. Kelly: A Forgotten Feminist, by Wendy McElroy, The Freeman, Oct 1998
Biographical essay on Dr. Gertrude B. Kelly (1862–1934), Irish immigrant, individualist feminist and contributor to the Liberty periodical (1881-1908)

For example, on reading a newspaper headline [about] the Haymarket protesters ... the teenaged individualist-feminist Voltairine de Cleyre had exclaimed aloud, "They ought to be hanged!" She keenly and instantly regretted the words, and assumed the opposite position with equal vehemence. Fourteen years later, de Cleyre remained sorely haunted by her words ... Much of de Cleyre's political activity in the ensuing years can be seen as an attempt to expiate her sin. Her most passionate addresses were delivered as lectures at the yearly memorials to the Haymarket martyrs that she attended.
Related Topics: Individualist Anarchism, Free Market, Republic of Ireland, Liberty, Occupational Licensing, Taxation
Introducing Revisionism: An interview with James J. Martin, by Michael Hardesty, Peter Kuetzing, John McCarthy, Steven Springer, Reason, Jan 1976
Topics discussed include: World War II vs. Vietnam War revisionism, genocide, the definition of "aggression" between nations, the Cold War, Lysander Spooner vs. Benjamin Tucker on natural rights, the Columbus complex and individualist anarchism

... the writings of the woman radical named Voltairine de Cleyre ... a very much neglected and overlooked lady revolutionist and thinker of great importance in this country. ... [she] advanced the notion that at bottom, if you kept going down to the bottom, in an attempt to search out the reason for the existence of this or that individual attitude towards ethical, philosophical and related questions, you got back down to a biological basis—what she called temperament—which was not capable of being understood or measured by any kind of rational approach; and that it was a genetic factor.
Related Topics: Lysander Spooner, Benjamin Tucker, War
Libertarian Feminism: An Honorable Tradition, by Sharon Presley, 2 Dec 2014
Traces the feminist tradition from individualist anarchists in the 18th, 19th and early 20th century, to the creation in 1973 of the Association of Libertarian Feminists and on to present activism

However the most famous of the individualist anarchist feminists was Voltairine de Cleyre ... Though she later declared herself an "anarchist without adjectives," her individualist spirit continued. Her essay "Sex Slavery" was the most systematic statement of the social construction of gender (before such a term even existed) since Sarah Grimke's essays ... Though she was not alone in this belief, many mainstream feminists and most male anarchists bought into the traditional stereotypes of women as weaker ... This radical aspect of her ideas has been insufficiently appreciated, even by people who are familiar with her.
Related Topics: Association of Libertarian Feminists, Joan Kennedy Taylor, Benjamin Tucker
Voltairine de Cleyre | Libertarianism.org, by Sharon Presley, Libertarian Review, Mar 1979
Biographical essay, discussing Cleyre's life, views on anarchism and marriage, and contrasting her to Emma Goldman

In An American Anarchist: the Life of Voltairine de Cleyre (Princeton University Press, 1978), Avrich makes that legend come alive, revealing not only Voltairine de Cleyre the anarchist but Voltairine de Cleyre the person as well. ... Born in a small village in Michigan in 1866, Voltairine, plagued all her life by poverty, pain and ill health, died prematurely at the age of 45 in 1912. The short span of her life, ending before the great events of the 20th century, is, in Avrich's opinion, the major reason why Voltairine de Cleyre has been overlooked, unlike the longer-lived Emma Goldman and Alexander Berkman.
Related Topics: Anarchism, Marriage
Voltairine de Cleyre: Penitent Priestess of Anarchism, by Jeff Riggenbach, 17 Jun 2010
Biographical essay, transcript of "The Libertarian Tradition" podcast of 8 June 2010

The libertarian I'd like to discuss today was something of a star in that first libertarian movement, though her works and even her name are pretty close to forgotten today. Voltairine de Cleyre was born November 17, 1866, just after the end of the American Civil War, in a town called Leslie, in rural Central Michigan, about 20 miles south of Lansing ... Voltairine never wrote a book, but certain of her essays are really neglected classics. Her essay "Anarchism and American Traditions," for example, appeared originally in 1908 and 1909 in the pages of Mother Earth, Emma Goldman's anarchist magazine. It is a true gem.
Related Topics: Anarchism, Atheism, Libertarianism, Benjamin Tucker

Anarchism, Free Society, 13 Oct 1901
Examines various economic propositions for anarchism (socialist, communist, individualist and mutualist) and opines that all could be tried out

There are two spirits abroad in the world,—the spirit of Caution, the spirit of Dare, the spirit of Quiescence, the spirit of Unrest; ... the spirit of the slow and steady builder, careful of its labors, loath to part with any of its achievements ... and the spirit of the inspirational destroyer ... Which is more necessary, the sunshine or the rain? They are contradictory—yes; they destroy each other—yes, but from this destruction the flowers result. Each choose that method which expresses your selfhood best, and condemn no other man because he expresses his Self otherwise.
Related Topics: Anarchism, Individualist Anarchism, Communism, Europe, Labor, Mutualism, Socialism, The State, Benjamin Tucker

The introductory paragraph uses material from the Wikipedia article "Voltairine de Cleyre" as of 16 Jul 2018, which is released under the Creative Commons Attribution-Share-Alike License 3.0.