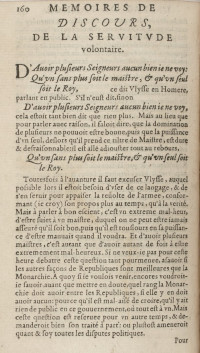 The Discourse on Voluntary Servitude (Discours de la servitude volontaire) is a 16th century French essay attributed to Étienne de La Boétie. It was first published in full after La Boétie's death (1563) in the third volume of Memoires de l'estat de France, sous Charles IX in 1576. It had appeared in part in 1574 in Latin and then translated to (middle) French in the Huguenot pamphlet Le Reveille-matin des François, et de leur voisins. According to La Boétie's friend Michel de Montaigne, who inherited his books and papers, the essay was written when La Boétie was 18-years old (c. 1548).

In the Discourse, the author wonders why people succumb so easily to tyranny or authority, when by refusing to serve they would become free and the despot would collapse like a large colossus missing its base. The author conjectures that tyranny is maintained because although only five or six persons support the ruler directly, these in turn are supported by hundreds and thousands more seeking favors.

A 16th-century essay entitled Discourse of Voluntary Servitude by the French jurist Étienne de La Boétie (1530–1563) discusses a question that haunts those who love liberty: Why do people obey unjust laws? The Discourse offers insight. It examines the psychology of those who obey, those who command, and those who resist. ... Discourse first circulated privately in France (circa 1553) against a backdrop of foreign war and domestic conflict. ... Discourse was most likely written while La Boétie was a law student at the University of Orléans, renowned for Huguenot activity.
Related Topics: France, Étienne de La Boétie
Étienne de La Boétie, Part 2, by Wendy McElroy, Freedom Daily, May 2003
Examines major themes in La Boétie's "Discourse": custom (habit), control of information, buying off the people and withdrawal of consent

La Boétie advised the average man, 'I do not ask that you place hands upon the tyrant to topple him over, but simply that you support him no longer; then you will behold him, like a great Colossus whose pedestal has been pulled away, fall of his own weight and break into pieces.' For rendering this advice, Gene Sharp, author of the definitive work on nonviolence, The Politics of Nonviolent Action, commented, '[La] Boétie's Discourse is a highly significant essay on the ultimate source of political power, the origins of dictatorship, and the means by which people can prevent political enslavement and liberate themselves.'
Related Topics: Compulsory Education, Étienne de La Boétie, Freedom of the Press, Taxation
Subjugating Ourselves, by Sheldon Richman, The Goal Is Freedom, 7 May 2010
Examines key passages from La Boetie's Discourse on Voluntary Servitude and criticizes newspaper editorial writers (with a recent example) for preaching to the people to acquiesce and submit to government

In The Politics of Obedience: The Discourse of Voluntary Servitude, the sixteenth-century French poet, judge, and political philosopher Étienne de La Boétie wondered "how it happens that so many men, so many villages, so many cities, so many nations, sometimes suffer under a single tyrant who has no other power than the power they give him; who is able to harm them only to the extent to which they have the willingness to bear with him; who could do them absolutely no injury unless they preferred to put up with him rather than contradict him. Surely a striking situation!"
Related Topics: Democracy, Government, Étienne de La Boétie, Alexis de Tocqueville

Discourse on Voluntary Servitude, by Étienne de La Boétie, 1576
Electronic text of the 1942 English translation by Harry Kurz available at the Online Library of Liberty, in HTML, PDF and Kindle formats