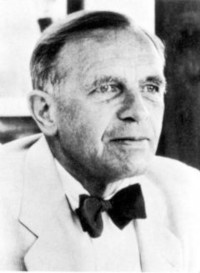 Wilhelm Röpke (10 October 1899 – 12 February 1966) was Professor of Economics, first in Jena, then in Graz, Marburg, Istanbul and finally Geneva, Switzerland, and one of the spiritual fathers of the social market economy, theorizing and collaborating to organize the post-World War II economic re-awakening of the war-wrecked German economy, deploying a program sometimes referred to as the sociological neoliberalism (compared to ordoliberalism, a more sociologically inclined variant of German neoliberalism).

Wilhelm Röpke, economist and author, was an economist of the Austrian School and a key influence on Ludwig Erhard, the economic minister of West Germany following World War II. ... Along with Walter Eucken, Alexander Rüstow, and others, Röpke advised Ludwig Erhard on how to reform the West German economy following World War II. This group of Ordoliberals, as they came to be known, pushed for a substantially more market-oriented system than that which preceded it, along with a modest system of transfer payments consistent with modern welfare state goals. Röpke was later quite critical about the growth of such transfer programs.
Related Topic: Germany

Monetary Central Planning and the State, Part 29: The Gold Standard in the 19th Century, by Richard Ebeling, Freedom Daily, May 1999
Discusses the evolution of the gold standard, from the creation of the Bank of England (1694), the Bank Restriction Act (1797), arguments for its repeal by David Ricardo and John Stuart Mill, and its international development until the 1890s

As ... Wilhelm Roepke explained in International Order and Economic Integration:

The international "open society" of the 19th century was the creation of the "liberal spirit" in the widest sense, [guided by] the liberal principle that economic affairs should be free from political direction, the principle of a thorough separation between the spheres of government and of economy ... The economic process was thereby removed from the sphere of officialdom, of public and penal law, in short from the sphere of the "state" to that of the "market," of private law, of property, in short to the sphere of "society."

The original participants included ... Wilhelm Röpke, who played a key role in the great German currency reform of 1948, along with Walter Eucken, an anti-Nazi pursued by the Gestapo during the war ... Wilhelm Röpke, helped persuade Eucken's pupil Ludwig Erhard, then economics minister in West Germany's provisional government, to abolish price controls, and so make possible the famous German economic miracle of the postwar era. Erhard lifted regulatory controls over a weekend, only to be threatened with jail by the Allied military authorities.
Related Topics: Milton Friedman, Germany, Gold Standard, F. A. Hayek, Ludwig von Mises, Mont Pelerin Society, Prices, The Road to Serfdom, George Stigler, Switzerland

The introductory paragraph uses material from the Wikipedia article "Wilhelm Röpke" as of 8 Aug 2018, which is released under the Creative Commons Attribution-Share-Alike License 3.0.