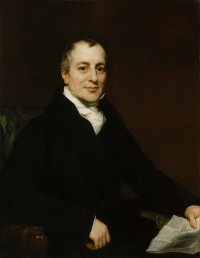 David Ricardo (18 April 1772 – 11 September 1823) was a British political economist, one of the most influential of the classical economists along with Thomas Malthus, Adam Smith and James Mill.

David Ricardo was one of those rare people who achieved both tremendous success and lasting fame. After his family disinherited him for marrying outside his Jewish faith, Ricardo made a fortune as a stockbroker and loan broker. When he died, his estate was worth more than $100 million in today's dollars. At age twenty-seven, after reading Adam Smith's The Wealth of Nations, Ricardo got excited about economics. He wrote his first economics article at age thirty-seven and then spent the following fourteen years—his last ones—as a professional economist.
Ricardo, David (1772-1823), by Mark Skousen, The Encyclopedia of Libertarianism, 15 Aug 2008
Biographical essay

David Ricardo was a brilliant classical economist. His policies of free trade and hard money helped propel Britain into its role as 'workshop of the world' and as an industrial giant, yet his labor theory of value and antagonistic model of capitalism proved misguided and gave unexpected support to the Marxists and socialists. ... He argued that England's raging inflationary price spiral was caused by the Bank of England issuing excessive bank notes to pay for the war against France. ... He made profound contributions to economics, including the laws of comparative advantage, diminishing returns, and the quantity theory of money.
Related Topic: Wages

Published Works of David Ricardo
List of 12 books, speeches, essays and other writings by Ricardo; part of McMaster University's Archive for the History of Economic Thought

The Accidental Inventor of Today's Capitalism: Jean-Baptiste Say, No Longer a Villain, Stands Guard Over Free Markets, by Louis Uchitelle, The New York Times, 21 Feb 1998
Written in the aftermath of the 1997 Asian financial crisis, discusses the Say's law, both as popularly heard and what he actually wrote, and Keynes' role in making Say's unwritten words famous as well as his preference for government intervention

David Ricardo and James Mill were more dogmatic in their adherence to what is now known as Say's law of markets. And when Thomas Malthus objected to that law, Ricardo took him on far more than did Say, who could see two sides of an argument. ... Whatever the case, Ricardo won the great debate with Malthus. ... Since then [the early 1980's], however, Say's law has reasserted itself. Ricardo's initial victory is reflected today in deregulation, in the privatization of state enterprises, in the expanding global market and, most recently, in the commentary on the Asian crisis.
Related Topics: Government, Jean-Baptiste Say
Explaining Commerce to the Commerce Secretary, by Colin Grabow, Inu Manak, 14 Dec 2017
Criticizes Commerce Secretary Wilbur Ross for his comments about the Korea-U.S. Free Trade Agreement, showing he "forgets some basic lessons of international trade"

... Secretary Ross ... misunderstands the one true and nontrivial principle in the social sciences, which is Ricardo's theory of comparative advantage. ... David Ricardo clearly explained the theory of comparative advantage in On the Principles of Political Economy and Taxation 200 years ago. He stated: '... Though [Portugal] could make the cloth with the labour of 90 men, she would import it from a country where it required the labour of 100 men to produce it, because it would be advantageous to her rather to employ her capital in the production of wine, for which she would obtain more cloth from England ...'
Related Topics: Law of Comparative Advantage, Free Trade
Frank A. Fetter (1863-1949): A Forgotten Giant, by Jeffrey Herbener
Biographical and bibliographical essay

In particular, David Ricardo, because he accepted Smith's concept of embodied labor, exerted 'a tremendous and evil influence in ways then all unforeseen. Labor is the source of value...; labor is the cause of value; labor produces all wealth. Naturally follows the ethical and political conclusion: if labor produces all wealth then labor should receive all wealth.' A conclusion 'the Ricardian socialists' were all too eager to embrace and which Karl Marx later used to great effect.
Related Topics: Austrian Economics, Entrepreneurship, Frank Fetter, Henry George, Money, Adam Smith
Is Free Trade Obsolete? Part 1, by Sheldon Richman, Future of Freedom, Apr 2004
Critiques a Paul Craig Roberts and Charles Schumer article arguing against free trade due to a "new economic era", introducing first the law of comparative advantage

To explain this, we have to go back to one of the most important contributions to economic theory, David Ricardo's law of comparative advantage, which the late Murray Rothbard called "indispensable to the case for free trade." (According to Rothbard it was James Mill, not Ricardo, who first formulated the law.) The question Ricardo was addressing was whether a group of people (such as a country) would have an economic interest in trading with another group even if the first was more efficient than the second at producing all goods.
Related Topics: Law of Comparative Advantage, Free Market, Free Trade, Paul Craig Roberts, Murray Rothbard, Technology
Is Free Trade Obsolete? Part 2, by Sheldon Richman, Future of Freedom, May 2004
After providing a numerical example of the law of comparative advantage, defends it from the argument (made by Roberts and Schumer) that movable factors of production make the law no longer applicable

According to economist Paul Craig Roberts, ... Ricardo's law depends on the inability of capital and labor to move across national boundaries. Since that condition no longer obtains, the law of comparative advantage no longer operates ...When reading Ricardo, one is hard-pressed to see the argument that Roberts makes. Ricardo notes that capitalists are reluctant to move their capital from their home country, but he doesn't say that there would be no gains from trade if that were not the case. In fact, he says consumers in both countries would benefit if capital moved to the more efficient area.
Related Topics: Law of Comparative Advantage, Free Trade, Paul Craig Roberts, Technology
Monetary Central Planning and the State, Part 29: The Gold Standard in the 19th Century, by Richard Ebeling, Future of Freedom, May 1999
Discusses the evolution of the gold standard, from the creation of the Bank of England (1694), the Bank Restriction Act (1797), arguments for its repeal by David Ricardo and John Stuart Mill, and its international development until the 1890s

In 1809, David Ricardo ... published a monograph entitled The High Price of Bullion. He argued that the depreciation of the British pound was due solely to the excessive expansion of the Bank of England's notes that had been made possible by the removal of redemption on demand in gold by the Restriction Act. Ricardo reasoned that the close connection between the Bank of England and the British government, due to the latter's heavy borrowing and the former's large amount of lending irredeemable paper money to the government, had resulted in the Bank's losing any independence it had in its money-creation powers.
Related Topics: Gold Standard, Individual Liberty, John Stuart Mill, Money, Wilhelm Röpke, Murray Rothbard, United Kingdom
Ricardo in Parliament, by Edwin Cannan, The Economic Journal , 1894
Account of Ricardo's final years, as a Member of Parliament for the borough of Portarlington, discussing his actions and speeches on matters of general and economic policy

All that we know is that he was elected on February 20, 1819, ... and that on the dissolution of Parliament at the death of George III he was re-elected for the same constituency, and continued to represent it till his death on September 11, 1823. For his time Ricardo was a very active member. ... it is clear that he must have attended divisions most conscientiously. As regards the miscellaneous questions of general politics which concern an economist no more than any other citizen, Ricardo invariably acted with the most liberal section of the House.
Related Topics: Freedom of Association, Government, Freedom of Religion, Taxation, Voting

An Essay on the Influence of a low Price of Corn on the Profits; shewing the Inexpediency of Restrictions on Importation: With Remarks on Mr Malthus' Two Last Publications, 1815
Ricardo criticizes Malthus, who had previously written "Observations on the Corn Laws" generally supportive of free trade, for his The Grounds of an Opinion on the Policy of Restricting the Importation of Foreign Corn

The principles which regulate rent are briefly stated ... and differ in a very slight degree from those ... developed by Mr Malthus ... The consideration of those principles, together with those which regulate the profit of stock, have convinced me of the policy of leaving the importation of corn unrestricted by law. ... viewing, as he does, the danger as formidable of depending on foreign supply for a large portion of our food, he considers it wise, on the whole, to restrict importation. Not participating with him in those fears, and perhaps estimating the advantages of a cheap price of corn at a higher value, I have come to a different conclusion.
Related Topics: Free Trade, Wages

On the Principles of Political Economy and Taxation, 1817
Partial contents: On Value - On Rent - On the Rent of Mines - On Natural and Market Price - Of Wages - On Profits - On Foreign Trade - On Taxes - Taxes on Raw Produce - Taxes on Rent - Tithes - Land-Tax - Taxes on Gold - Taxes on Houses - Taxes on Profits
Related Topics: Economics, Taxation

The introductory paragraph uses material from the Wikipedia article "David Ricardo" as of 5 Aug 2018, which is released under the Creative Commons Attribution-Share-Alike License 3.0.