The Road to Serfdom 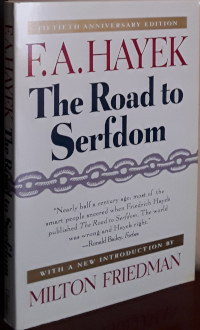 The Road to Serfdom is a best-selling political philosophy book by Friedrich Hayek first published in England on 10 March 1944. Reader's Digest published a condensed version in April 1945. It was dedicated "To the socialists of all parties. In it, Hayek criticized the central planning efforts undertaken by nations towards the end of World War II and warned that abandoning individualism and "the principle of laissez faire" would lead to tyranny.

In a 1978 interview with Leo Rosten, Hayek explained that the title's idea came from Alexis de Tocqueville who spoke about "the road to servitude".

Dialectics and Liberty, by Chris Matthew Sciabarra, The Freeman, Sep 2005
Written ten years after publication of the first two of Sciabarra's "Dialectic and Liberty" trilogy, discusses Hayek's and Rand's dialectical analysis approaches and suggests that such context-keeping analysis is important in radical libertarian theory

[I]n his classic book, The Road to Serfdom, Hayek presents us with a multidimensional view of the corrosive nature of government control. He does not focus on the one-dimensional economic effects of state regulation. In fact, one might say that his primary concern is with the insidious, multidimensional effects of statism—how its consequences redound throughout a nexus of social relations: economic, political, and even social-psychological ... Hayek analyzes statism ... as a phenomenon whose effects can be measured on many different levels of generality and from many different vantage points.
Related Topics: Aristotle, Capitalism, Dialectics, F. A. Hayek, Libertarianism, Personal Responsibility, Ayn Rand, Socialism, Society, The State
Faculty Spotlight Interview: Thomas DiLorenzo, by Thomas DiLorenzo, 16 Aug 2010
Asks DiLorenzo about an alternate career path, hobbies, biggest inspiration, the Mises Institute and Austrian tradition, his class at Mises academy, future works and words of wisdom for young scholars

I'm teaching a five-week online class on F.A. Hayek's classic book, The Road to Serfdom. After Glenn Beck invited our friends Tom Woods and Yuri Maltsev to appear on his television show to discuss the book, it went to #1 in sales on Amazon.com. It did so because so many people understand that the explosion of government that we are currently witnessing can lead to nothing but more tax slavery and economic depression. The Road to Serfdom is a classic warning of the dangers of Big Government. In reading it one learns not just of Hayek's personal views, but a great deal about the entire Austrian tradition of scholarship.
Related Topics: United States, Austrian Economics
F.A. Hayek accomplished several careers' worth of economic achievements in one lifetime, by Art Carden, 8 May 2017
Bibliographic essay discussing the diverse scope of Hayek's works

[Hayek] was most famous ... for his 1944 book The Road to Serfdom, a more popular treatment of many of the ideas expressed in Individualism and Economic Order that had a deep and profound effect on the English-speaking world. Its theme—that statism, socialism, and the erosion of economic liberty meant the erosion of political and civil liberty—was a brilliant exposition of classical liberal ideas ... It is through The Road to Serfdom—which was condensed by Reader’s Digest and circulated ... by the Book of the Month Club—that Hayek likely had his biggest effect on public policy.
Related Topics: F. A. Hayek, Socialism
Friedrich A. Hayek (1899-1992), by Peter J. Boettke, The Freeman, Aug 1992
Lengthy biographical essay, including Hayek's criticism of Keynes and the impact of The Road to Serfdom

The problems of socialism that [Hayek] had observed ... led him to write The Road to Serfdom (1944). This book forced advocates of socialism to confront an additional problem ... [t]he absence of a pricing system ... In The Road to Serfdom Hayek also argued that there was good reason to suspect that those who would rise to the top in a socialistic regime would be those who had a comparative advantage in exercising discretionary power and were willing to make unpleasant decisions. And it was inevitable that these powerful men would run the system to their own personal advantage.
Related Topics: Economics, Austrian Economics, F. A. Hayek, Rule of Law, Ludwig von Mises, Socialism
Friedrich the Great, by Virginia Postrel, The Boston Globe, 11 Jan 2004
Biographical essay, including Hayek's insights on cognitive science and his influence on postmodernism

This analysis, which applies as much to culture as to economics, informs Hayek's best-known work, "The Road to Serfdom," which he wrote as a wartime warning to a popular audience. Published in 1944 and dedicated "to the socialists of all parties," the book argued that the logic of socialist central planning implied the erosion of personal freedoms. Britain's well-intended socialists were headed down the same path as the National Socialists whose rise Hayek had witnessed in Austria ... in the United States, where Reader's Digest published a condensed version, "The Road to Serfdom" was a bestseller and a political lightning rod.
Related Topics: Milton Friedman, Nick Gillespie, F. A. Hayek, Money, Prices
Hayek: A Commemorative Album, by Richard Ebeling, Freedom Daily, Jul 1999
Review of Hayek: A Commemorative Album (1999) compiled by John Raybould

At the same time, Hayek began amplifying Mises's criticisms of socialism, explaining that a developed system of division of labor is just too complex to be controlled and directed through any form of central planning. Only competitively formed market prices can successfully coordinate all the activities of the multitudes of market participants. This argument culminated in Hayek's most influential book, The Road to Serfdom, published in 1944, in which he showed not only that planning could not work but inevitably ran the risk of degenerating into political tyranny.
Related Topics: F. A. Hayek, Institute for Humane Studies, Ludwig von Mises, Nobel Prize
The Mont Pelerin Society's 50th Anniversary, by Greg Kaza, The Freeman, Jun 1997
Historical and anecdotal essay about the founding of the Mont Pelerin Society and its first meeting, including insights on post World War II Germany

In 1944, Hayek wrote a seminal book, The Road to Serfdom, which argued that government central planning inevitably led to the rise of the totalitarian socialist state. Marxists maintained that fascism was a form of decaying capitalism, but Hayek's book also included a trenchant critique of Nazism as a form of socialism. After writing The Road to Serfdom, Hayek toured the United States. The trip contributed to his decision to issue a call to free-market advocates to meet at Mont Pelerin.
Related Topics: Milton Friedman, Germany, Gold Standard, F. A. Hayek, Ludwig von Mises, Mont Pelerin Society, Prices, Wilhelm Röpke, George Stigler, Switzerland
Reading the Literature of Liberty, by Roy A. Childs, Jr., May 1987
Childs' selection of "great books", including works by Hazlitt, Bastiat, Rose Wilder Lane, Nock, Ayn Rand, Friedman, Hayek, Rothbard, Mises and Nozick

[F. A. Hayek's] seminal work The Road to Serfdom was first published in 1944 and has become a classic warning against the dangers to freedom inherent in the planned economy; it's as powerful today as the day it was written. Chapters like "Why the Worst Get on Top" and "The End of Truth" are both provocative and chilling. Don't pass this one up!
Related Topics: Frédéric Bastiat, For a New Liberty, Milton Friedman, F. A. Hayek, Henry Hazlitt, The Law, Libertarianism, Man, Economy, and State, Ludwig von Mises, Albert Jay Nock, Ayn Rand, Murray N. Rothbard

The Road to Serfdom
by F. A. Hayek, 1944
Partial contents: The Abandoned Road - The Great Utopia - Individualism and Collectivism - The "Inevitability" of Planning - Planning and Democracy - Planning and the Rule of Law - Economic Control and Totalitarianism - Who, Whom? - Security and Freedom
Related Topic: Socialism