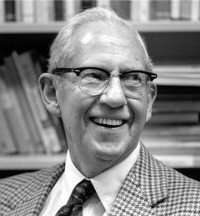 George Joseph Stigler (17 January 1911 – 1 December 1991) was an American economist, the 1982 laureate in Nobel Memorial Prize in Economic Sciences and a key leader of the Chicago School of Economics.

George J. Stigler was one of the central figures of the Chicago School of Economics. ... Stigler's belief in the power of markets to solve social problems—and the often negative consequences of government intervention—can be seen in two of his earliest publications. In 1945, he examined the effects of the minimum wage ... arguing that it does little to alleviate poverty and distorts the allocation of resources. The following year ... Stigler and Friedman critiqued the policy of rent control, arguing that it led to shortages in the housing supply and higher prices for most consumers.
Related Topics: Free Market, Prices

The Early History of FEE, by Henry Hazlitt, The Freeman, Mar 1984
Excerpted from Hazlitt's remarks at the Leonard E. Read Memorial Conference on Freedom, November 1983; reprinted in the May 2006 issue, including photos of early FEE senior staff

And then in an amazingly short time a stream of publications began to pour forth ... A month later [September 1946] came a 22-page pamphlet called Roofs or Ceilings?, an attack on rent control, sent in by two young fellows from the University of Chicago, Milton Friedman and George J. Stigler, both destined to become future recipients of the Nobel prize in economics. FEE distributed 36,000 of these, plus a special condensed version of 500,000 copies for the National Association of Real Estate Boards ... I see no evidence that the Friedman-Stigler pamphlet did anything to slow down rent control.
Related Topics: Atlas Network, Manuel Ayau, Foundation for Economic Education, Universidad Francisco Marroquín, The Freeman, Milton Friedman, F. A. Harper, F. A. Hayek, The Law, Ludwig von Mises, Mont Pelerin Society, Leonard Read, The Wealth of Nations
Mont Pelerin: 1947-1978: The Road to Libertarianism, by Ralph Raico, Libertarian Review, Jan 1979
Reviews the presentations and discussions at the 1978 meeting of the Mont Pelerin Society, with an overview of the Society's history and particularly the 1958 meeting which had similar themes

George Stigler, in his presidential address, was critical of existing theories explaining the rise of statism. He was especially doubtful about the "mistaken behavior theory" whereby intellectuals influence the public to accept damaging state interventions. Stigler does not believe that intellectuals are the cause of socialism; he believes they are merely responding to the demand of the public in the same way that the automobile industry responds to demand. He notes that it is not the socially backward or uneducated part of the public which provides the chief support for statism.
Related Topics: France, Milton Friedman, Gold Standard, F. A. Hayek, Inflation, Libertarianism, Mont Pelerin Society
The Mont Pelerin Society's 50th Anniversary, by Greg Kaza, The Freeman, Jun 1997
Historical and anecdotal essay about the founding of the Mont Pelerin Society and its first meeting, including insights on post World War II Germany

Stigler later devoted a chapter of his book Memoirs of an Unregulated Economist to the Society's first meeting ... "It was a revealing first visit," Stigler wrote, "for the younger participants, including Milton Friedman and me ... I concluded that the British obeyed all laws, the French none, and the Americans obeyed those laws that deserved obedience ..." Stigler continues, "I was instrumental, for the only time in my life, in instructing Friedman on monetary affairs ..." ... "The protection of agriculture and of agricultural classes generally had strong supporters and opponents," Stigler wrote.
Related Topics: Milton Friedman, Germany, Gold Standard, F. A. Hayek, Ludwig von Mises, Mont Pelerin Society, Prices, The Road to Serfdom, Wilhelm Röpke, Switzerland
The Nature and Significance of Economic Education, by Israel Kirzner, The Freeman, Oct 1998
Revised version of lecture given 19 March 1998; explains why economic education of both the general public and legislators is needed and why a teacher, such as Mises, must remain scientifically detached even if passionate about the teaching goals

An eminent economist once provocatively declared that economists qua scientists have no business making normative pronouncements on economic policy (or, in fact, on anything else). To make such pronouncements, George Stigler somewhat impishly asserted, was to engage in "preaching." As a citizen the economist may certainly express dismay at the consequences of economic policies; he may abhor these consequences. But those who initiated and executed these policies, he argued, obviously desired these consequences (which others are viewing with abhorrence).
Related Topics: Economic Fallacies, Economic Resources, Economics, Austrian Economics, Entrepreneurship, Foundation for Economic Education, Free Market, Government, Human Action, Ludwig von Mises

The introductory paragraph uses material from the Wikipedia article "George Stigler" as of 14 Jul 2018, which is released under the Creative Commons Attribution-Share-Alike License 3.0.