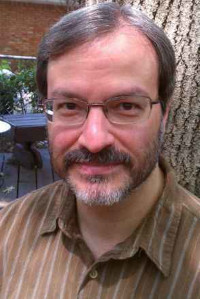 Jacob Z. Sullum (born 5 September 1965) is a syndicated newspaper columnist with Creators Syndicate and a senior editor at Reason magazine. He focuses most of his writings on shrinking the realm of politics and expanding individual choice. He was interviewed in the 2004 documentary Super Size Me.

Jacob Sullum is a senior editor at Reason, a monthly magazine that covers politics and culture from a libertarian perspective. During two decades in journalism he has relentlessly skewered authoritarians of the left and the right, making the case for shrinking the realm of politics and expanding the realm of individual choice. ... In 2004, he received the Thomas S. Szasz Award for Outstanding Contributions to the Cause of Civil Liberties, and in 2005, he received the Drug Policy Alliance's Edward M. Brecher Award for Achievement in the Field of Journalism.
Advocates for Self-Government - Libertarian Education: Jacob Sullum - Libertarian
Libertarian celebrity page at Advocates for Self-Government; includes picture, biographical summary and quote

Sullum has also written for National Review, Cigar Aficionado, The Wall Street Journal, The New York Times, the Los Angeles Times, and many other publications. Sullum writes about a wide range of issues, including drug policy, gun control, censorship, privacy, education, and religious freedom. ... Sullum, a fellow of the Knight Center for Specialized Journalism, has been a featured speaker at the International Conference on Drug Policy Reform ... In 1988 he won the Keystone Press Award for investigative reporting, and in 1991 he received First Prize in the Felix Morley Memorial Journalism Competition.
Jacob Sullum - Reason.com
Author page at Reason.com; includes picture, profile and links to recent articles

Jacob Sullum is a senior editor at Reason and a nationally syndicated columnist ... Sullum's weekly column, distributed by Creators Syndicate, is carried by newspapers across the U.S. ... Saying Yes has been praised by both sides of the political spectrum. National Review called it "a highly effective debunking," and Mother Jones described it as "a healthy dose of sober talk in a debate dominated by yelping dopes." For Your Own Good also was widely praised by reviewers, who called it "compelling" (The Wall Street Journal), "meticulously logical" (The New York Times), and a "cogent and thorough...must-read" (The Washington Post).

The Most Absurdities per Kilo, by James Bovard, Freedom Daily, Feb 2006
Describes Operation Pipe Dreams, a group of raids led by the Department of Justice to confiscate drug paraphernalia, and particularly the attack on Tommy Chong's residence,subsequent arrest and sentencing

The Chong raids had no effect on the national marijuana market or on the vast majority of the 20 million Americans who use cannabis each year. Author Jacob Sullum observed, "Although the thought of a bong-bearing hippie under every bed may keep Ashcroft awake at night, it's hard to see how seizing marijuana pipes can be expected to have any impact on drug use. As long as there are paper and aluminum foil, pot smokers will have ready alternatives."
Related Topics: War on Drugs, Freedom of Speech, Terrorism

Paul's Apology: Say it ain't so, Dr. No, Reason, 16 Jan 2008
Examines Ron Paul's record, the controversy over the newsletters published under Paul's name in the 1980s and 1990s, and Paul's response

Ron Paul is not just a rare politician. The Texas Republican's combination of principle and plainspokenness ... has helped his presidential campaign break fund-raising records while attracting a strikingly diverse and enthusiastic crowd of supporters ... On CNN Paul emphasized that racist libertarian is an oxymoron, since libertarians judge people as individuals. He should follow through on that point by identifying the author(s) of the race-baiting material and repudiating not just the sentiments it represents but the poisonous, self-defeating strategy of building an anti-collectivist movement on group hatred.
Related Topics: Libertarianism, Ron Paul
Track Work, Reason, 19 Jun 2001
Discusses comments by George W. Bush's Social Security commission co-chairmen and criticism and remarks from others

It used to be said that Social Security was the "third rail" of American politics: If you touched it, you were dead. Nowadays it's more like the first and second rails: You can take a stand on it ... until a train comes along ... Social Security, which forces relatively poor workers to subsidize relatively affluent retirees, is not a fair system, and any attempt to fix it–or, better yet, dismantle it–will not be entirely fair either. Yet we need to start talking about how the suffering should be distributed. We can't dodge the train or stop it, but if we all get down on the track we can at least spread out the pain of its impact.
Related Topic: Social Security Tax

Cold Comfort: An Interview with John R. Lott, by Michael W. Lynch, John Lott, Jacob Sullum, Reason, Jan 2000
Focuses primarily on Lott's More Guns, Less Crime (1998): what led him to write it, approving, critical and other reviews and interpretations of the data presented

Reason: How did you become interested in guns?
John R. Lott Jr.: About six years ago, I was teaching a class dealing with crime issues at the University of Pennsylvania, and it dawned on me that my students would be interested in some papers on gun control. It forced me to look at the literature systematically to decide what papers to assign to the class. I was shocked by how poorly done the existing research on guns and crime was. ...
Lott: I understand the constitutional arguments, but I think for the vast majority of people the bottom line is whether the presence of guns, on net, saves lives or costs lives.
Related Topics: Right to Keep and Bear Arms, Children, Florida
Curing the Therapeutic State: Thomas Szasz interviewed by Jacob Sullum, by Thomas Szasz, Jacob Sullum, Reason, Jul 2000
Subjects discussed include involuntary commitment, the insanity defense, ADHD, government drug policies and physician-assisted suicide

Simply having one of Thomas Szasz's books on your shelf can lead to an argument. Explaining his most familiar contention—that there is, strictly speaking, no such thing as "mental illness"—almost invariably does. And the very mention of his name has been known to provoke a heated response from certain people ... Szasz ... has produced some 700 articles and two dozen books, including Law, Liberty, and Psychiatry (1963), The Ethics of Psychoanalysis (1965), The Manufacture of Madness (1970), The Myth of Psychotherapy (1976), The Therapeutic State (1984), and Our Right to Drugs (1992).
Related Topics: Children, War on Drugs, Free Market, Government, Health, Health Care, Rule of Law, Psychology, The State
Risky Journalism, by John Stossel, Jacob Sullum, Reason, Apr 1997
Lengthy introduction and interview, discussing Stossel's early work, his ABC News specials, his response to criticism, ABC's policies, objective reporting, and topics he would like to cover

While preparing a 20/20 segment on multiple chemical sensitivity that aired in January, John Stossel sent ABC associate producer Deborah Stone and her sister-in-law, Julie, to Dr. Grace Ziem, an MCS specialist in Baltimore. Prior to the visit, Ziem sent the two healthy women a 16-page questionnaire ... The National Press Club has recognized him five times for excellence in consumer reporting ... exposing scams has been a persistent theme in Stossel's career as a consumer reporter, and he continues to go after hucksters, swindlers, and charlatans, even when they happen to work for the government or serve a fashionable cause.
Related Topics: Business, Free Market, Government, Television Shows

The introductory paragraph uses material from the Wikipedia article "Jacob Sullum" as of 23 Jun 2018, which is released under the Creative Commons Attribution-Share-Alike License 3.0.