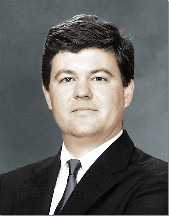 Mark Thornton (born 7 June 1960) is an American economist of the Austrian School. He has written on the topic of prohibition of drugs, the economics of the American War Between the States and the "Skyscraper Index". He is a Senior Fellow with the Ludwig von Mises Institute in Alabama and a Research Fellow with the Independent Institute.

"Soon after the 1996 election, Alabama Governor Fob James, speaking at a seminar at the ... Mises Institute, casually mentioned that he had heard the campaign commercials for the Libertarian candidate for U.S. Senate. The tag line ... had been, "Send me to Washington, and I'll get things 'undone'." ... James told the audience that he turned to his wife, and said, "We need to bring that guy to Montgomery." He then asked if anyone knew who that candidate was. Sitting next to James at the head of the table was Prof. Mark Thornton, the candidate in question. Thornton smiled, waved, and said "Hi Governor. Welcome to my seminar.""
Related Topic: Libertarian Party
Mark Thornton | Mises Institute
Author page at the Mises Institute; includes photograph, short profile, awards and links to his writings

"Mark Thornton ... serves as the Book Review Editor of the Quarterly Journal of Austrian Economics. His publications include ... The Skyscraper Curse and How Austrian Economists Predicted Every Major Crisis of the Last Century (2018). Dr. Thornton served as the editor of the Austrian Economics Newsletter and was a member of the Editorial Board of the Journal of Libertarian Studies and several other academic journals. He has served as a member of the graduate faculties of Auburn University and Columbus State University. He has also taught economics at Auburn University at Montgomery and Trinity University in Texas."
Our Campaigns - Candidate - Mark Thornton
Includes photograph, biographical details, links to races and results

Mark Thornton, Author at LewRockwell
Author page at LewRockwell.com; includes links to articles since July 2001 and blog posts from 2003-2013

"Benjamin Anderson is a rare example of an American economist who wrote in the Austrian tradition long before Ludwig von Mises emigrated to the U.S.. He was an indefatigable defender of market mechanisms, and was among the first to produce a systematic account of the economic causes of the Great Depression from a free-market perspective. ... Anderson's papers could not be found. No biography could be found. His two major theoretical works are Social Value: A Study in Economic Theory Critical and Constructive (1911) and The Value of Money (1917)."
Related Topics: Henry Hazlitt, Ludwig von Mises
The Origin of Economic Theory: A Portrait of Richard Cantillon (1680-1734), 3 Aug 2007
Examines the sections of Cantillon's Essai relating them to episodes in the author's life, then delving into several Austrian economics insights that can be found in the work

"Many crucial Austrian insights have been found in the economics of Irish banker Richard Cantillon (1680–1734) and his lone surviving publication, Essai sur la Nature du Commerce en General. It seems clear that Cantillon was an important influence on the development of Austrian economics, and that he can be considered a member of the Austrian School ... Cantillon has been misunderstood as a mercantilist and objective (i.e., intrinsic) value theorist, but in fact he exposed the errors of mercantilism and clearly understood the concept of opportunity cost, the fundamental principle in economic theory."
Related Topics: Richard Cantillon, Central Banking, Economics, Austrian Economics, Entrepreneurship, Money, Prices, Adam Smith

The introductory paragraph uses material from the Wikipedia article "Mark Thornton" as of 6 Jun 2018, which is released under the Creative Commons Attribution-Share-Alike License 3.0.