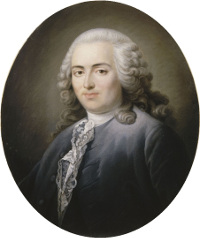 Anne Robert Jacques Turgot, Baron de l'Aulne (10 May 1727 – 18 March 1781), commonly known as Turgot, was a French economist and statesman. Originally considered a physiocrat, he is today best remembered as an early advocate for economic liberalism. He is thought to be the first economist to have recognized the law of diminishing marginal returns in agriculture.

Anne-Robert-Jacques Turgot was an economist and a statesman. Turgot was associated with the Physiocratic school of economics ... As finance minister, Turgot attempted to reproduce on a larger scale the reforms he had pioneered at Limoges. In his Six Edicts of 1776, Turgot tried to bring an end to official corruption and military requisitioning, abolish many local monopolies, introduce reforms in banking and taxation, and return to internal free trade in grain. Unfortunately, his efforts failed due to ... the ability of the vested interests who were being harmed by reform to organize against it ...
Related Topic: France

Life and Works of Anne Robert Jacques Turgot, by David M. Hart, 1 Mar 2001
Includes portrait and bibliography (works by and about Turgot)

Turgot was born in Paris on May 10, 1727 and died in Paris on March 20, 1781. He came from an old Norman family but did not always use his title Baron d'Aulne. He was an economist of the Physiocratic school, a politician, a reformist bureaucrat and a writer. His family wanted him to become a priest, so he was educated at the college of Louis-le-Grand, before taking a degree in theology at the seminary of St. Sulpice and at the Sorbonne.

He initiated reforms intended to deregulate agriculture and industry, encourage free trade and open borders, and establish fairer labor practices. He thought that eliminating such restrictions on the economy would usher in an era of such unprecedented prosperity that the regime's fiscal problems would evaporate. Turgot's finance revolution failed. In spite of his political and economic liberalism, he ended up implementing his reforms too hastily and too harshly, which evoked cries of dissent from the aristocracy.
Anne Robert Jacques Turgot, Who First Put Laissez-Faire Principles into Action, by Jim Powell, The Freeman, Aug 1997
Biographical essay, covering his life, works and involvement with the Physiocrats, as well as his accomplishments as an administrator

Turgot displayed remarkable vision. For instance, he predicted the American Revolution in 1750, more than two decades before George Washington and Benjamin Franklin saw it coming. In 1778, Turgot warned Americans that slavery is incompatible with a good political constitution. He warned that Americans had more to fear from civil war than foreign enemies. He predicted that Americans are bound to become great, not by war but by culture. Turgot warned French King Louis XVI that unless taxes and government spending were cut, there would be a revolution which might cost him his head.
Related Topics: John Adams, Bureaucracy, Economic Barriers, France, Free trade, Gold Standard, Government, Money, François Quesnay, Freedom of Religion, Joseph Schumpeter, Slavery, Adam Smith, Freedom of Speech, Taxation, Alexis de Tocqueville
Barack Obama: The Anti Economic Growth President, by Jim Powell, 29 Feb 2012
Lists and criticizes several of Obama's policies and proposals and discusses why economic growth and progress is beneficial

In 1750, the 23-year-old Frenchman Anne-Robert-Jacques Turgot became perhaps the first person to articulate the idea of progress. He gave a talk at the Sorbonne, titled 'A Philosophical Review Of The Successive Advances Of The Human Mind.' He told how 'manners are softened, the human mind is enlightened, and the total mass of human kind, through calm and upheaval, good fortune and bad, advances ever, though slowly, toward greater perfection.'
Related Topics: Benjamin Franklin, Bernard Mandeville, Barack Obama, Property Rights, Julian Simon, Adam Smith, Herbert Spencer
The Brilliance of Turgot, by Murray N. Rothbard, 1986
Biography and review of Turgot's major writings; introduction to The Turgot Collection (2011), edited by David Gordon

Anne Robert Jacques Turgot's career in economics was brief but brilliant, and in every way remarkable ... Turgot had a sparkling career as a student, earning honors at the Seminary of Saint-Sulpice ... Not only was Turgot a busy administrator, but his intellectual interests were wide-ranging ... His contributions to economics were brief, scattered, and hasty. His most famous work, "Reflections on the Formation and Distribution of Wealth" (1766), comprised only 53 pages ... One of Turgot's most remarkable contributions to economics ... was his brilliant and almost off-hand development of the laws of diminishing returns.
Related Topics: Eugen von Böhm-Bawerk, Capital Goods, Economic Resources, Entrepreneurship, Free Market, Free trade, Government, Labor, Money, Joseph Schumpeter, Taxation
The Early Economists Who Tried to Save France, by Richard Ebeling, 31 Oct 2016
Discusses the Physiocrats, focusing on Quesnay and Turgot

[Anne-Robert-Jacques] Turgot, brought some of the ideas of greater economic freedom into practice, at least to a limited degree. In 1761 Turgot was appointed the intendant (or governor) of the French province of Limoges—a position that he held for 12 years, with virtually complete administrative powers within the province's boundaries as the local representative of the central authority in Paris. He did away with one of the most oppressive and hated taxes in the province, the corvee, which was the compulsory labor required of the peasantry to construct and repair roads, for which labor the workers received no pay.
Related Topics: France, Free Market, Free trade, Government, François Quesnay, Taxation
Editorial: Turgot and the Battle Against Physiocracy, by Leonard Liggio, Literature of Liberty, 1979
Editorial essay for volume II, number 1; discusses those who influenced Turgot and those influenced by him

The continuing significance of Anne Robert Jacques Turgot (1727–1781) is both as a founder of modern economic science and as a powerful shaper of the Enlightenment idea of progress. The youthful Turgot was deeply moved by the liberal temper of Montesquieu's L'Esprit des Lois (1748). Turgot, however, found Montesquieu's determinism uncongenial; he was deeply impressed by the role of the human mind in molding history. ... Turgot was a disciple of one of the two masters of the Physiocratic School, the brilliant teacher J. C. M. Vincent de Gournay (1712–1759), in whose honor Turgot wrote his Eloge de Gournay.
Related Topics: Eugen von Böhm-Bawerk, Richard Cantillon, Thomas Jefferson, Jean-Baptiste Say
The Physiocrats, by Wendy McElroy, Freedom Daily, Dec 2010
Discusses the 18th century French economists and their influences on Adam Smith, on American agriarianism and on Henry George

Their advocacy was not merely intellectual. In August 1761, Turgot became a tax collector for the Limoges region and began to apply the insights of his mentor Quesnay. For example, he surveyed land to obtain a more just assessment of the value upon which it was taxed. ... Smith also became well acquainted with other prominent Physiocrats, including Turgot, who later became minister of finance and authored 'Reflections on the Formation and Distribution of Wealth.'
Related Topics: France, Benjamin Franklin, Henry George, Thomas Jefferson, François Quesnay, Adam Smith, Taxation

If the land was divided among all the inhabitants of a country, so that each of them possessed precisely the quantity necessary for his support, and nothing more; it is evident that all of them being equal, no one would work for another. Neither would any of them possess wherewith to pay another for his labour, for each person having only such a quantity of land as was necessary to produce a subsistence, would consume all he should gather, and would not have any thing to give in exchange for the labour of others.

The introductory paragraph uses material from the Wikipedia article "Anne Robert Jacques Turgot" as of 11 Jun 2018, which is released under the Creative Commons Attribution-Share-Alike License 3.0.