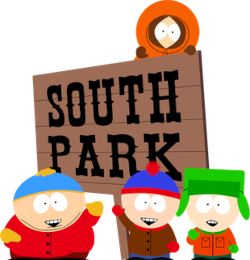 South Park is an American adult animated sitcom created by Trey Parker and Matt Stone and developed by Brian Graden for the Comedy Central television network. The show revolves around four boys—Stan Marsh, Kyle Broflovski, Eric Cartman and Kenny McCormick—and their bizarre adventures in and around the titular Colorado town. Much like The Simpsons, South Park uses a very large ensemble cast of recurring characters. It became infamous for its profanity and dark, surreal humor that satirizes a wide range of topics towards a mature audience. Parker and Stone developed the show from The Spirit of Christmas, two consecutive animated shorts created in 1992 and 1995. The latter became one of the first Internet viral videos, ultimately leading to South Park's production. It debuted in August 1997 with great success, consistently earning the highest ratings of any basic cable program. Subsequent ratings have varied but it remains one of Comedy Central's highest rated shows, and is slated to air in new episodes through 2019.

3 libertarian takeaways from South Park season 20 (SPOILERZ), by Joseph Kast, 14 Dec 2016
Discusses the themes of the 20th season of "South Park", in particular the issues of free speech and online anonymity, groupthink and the dangers of traditionalism

South Park may be pop culture's crudest cartoon, but it's also one of today's sharpest libertarian satires. Last season — season 19 — the series addressed the creepy effects and consequences of hyper-sanitized speech, the beauty and bravery of LGBT relationships (really), and the importance of a robust free press. And season 20 took the show's political themes to a new level, squarely tackling free speech, the perils of groupthink, and the temptation of traditionalism.
Related Topics: Conservatism, Freedom of Speech
The Invisible Gnomes and the Invisible Hand: South Park and Libertarian Philosophy, by Paul Cantor, 4 Dec 2006
General discussion of South Park with more detailed review and discussion of the season 2 "Gnomes" episode

South Park is at one and the same time the most vulgar and the most philosophical show ever to appear on television. Its vulgarity is of course the first thing one notices about it ... But if one is patient with South Park, and gives the show the benefit of the doubt, it turns out to be genuinely thought provoking, taking up one serious issue after another, from environmentalism and animal rights to assisted suicide and sexual harassment. And, as we shall see, the show approaches all these issues from a distinct philosophical position, what is known as libertarianism, the philosophy of freedom.
Related Topics: Capitalism, Friedrich Hayek, Humor, Libertarianism, Ludwig von Mises, Philosophy, The Wealth of Nations

South Park, now finishing its first decade at Comedy Central, follows the misadventures of four grade-school boys in the mythical town of South Park, Colorado, a Brigadoon of small-town depravity, degradation, and good old American values ... South Park has set many records during its run. For instance, the 2001 episode "It Hits the Fan" broke the swearing record on TV ... More commonly, though, the show takes on serious topics in a hilarious manner. These include idiotic sex and drug education programs foisted on kids ... and moral panics over everything from video games to gay sex to environmental degradation.
Related Topics: Colorado, Intellectual Property Laws, Libertarianism, The Oscars, Freedom of Speech, Television Shows

The introductory paragraph uses material from the Wikipedia article "South Park" as of 4 Oct 2018, which is released under the Creative Commons Attribution-Share-Alike License 3.0.