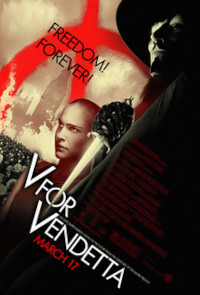 V for Vendetta is a 2005 dystopian political thriller film directed by James McTeigue and written by The Wachowskis, based on the 1988 DC/Vertigo Comics limited series of the same name by Alan Moore and David Lloyd. The film is set in an alternative future where a Nordic supremacist and neo-fascist regime has subjugated the United Kingdom. Hugo Weaving portrays V, an anarchist freedom fighter who attempts to ignite a revolution through elaborate terrorist acts, and Natalie Portman plays Evey, a young, working-class woman caught up in V's mission, while Stephen Rea portrays the detective leading a desperate quest to stop V.

In a future British tyranny, a shadowy freedom fighter plots to overthrow it with the help of a young woman.

Happy Counterterrorism Day, by Scott Horton, Harper's Magazine, 5 Nov 2007
Recounts the history of Guy Fawkes and the Gunpowder Plot and proposes three lessons to be learned from it for the present age

For centuries, Guy Fawkes Day marked the event. Englishmen were taught of the need to be vigilant in the defense of the realm ... But today, propelled by items of popular culture like the hit film 'V' for Vendetta, Britons have a take on Guy Fawkes that is much at odds with the historical one. Once Fawkes was a symbol of the traitor within. The people were called to be on guard against his like. No longer. Today Guy Fawkes is increasingly viewed as the heroic figure prepared to stand against an unjust and oppressive state, as a martyr and a victim of torture.
Related Topics: Protection Against Cruel and Unusual Punishments, George Washington

Imagine a Boot Stamping on Your Face, by John W. Whitehead, 7 Jul 2017
Discusses what the author considers a police state in 2017 United States and provides short reviews of 15 films that "may be the best representation of what we now face as a society"

This film depicts a society ruled by a corrupt and totalitarian government where everything is run by an abusive secret police. A vigilante named V dons a mask and leads a rebellion against the state. The subtext here is that authoritarian regimes through repression create their own enemies—that is, terrorists—forcing government agents and terrorists into a recurring cycle of violence. And who is caught in the middle? The citizens, of course. This film has a cult following among various underground political groups such as Anonymous, whose members wear the same Guy Fawkes mask as that worn by V.
Related Topics: George Orwell, Right Against Unreasonable Searches and Seizures, Brazil, Fahrenheit 451, The Matrix, Minority Report
'V for Vendetta', by Butler Shaffer, 20 Mar 2006
Review of the 2006 V for Vendetta film, praising both the story as well as the cinematography

Not only is this the most powerful anti-state film I have ever seen – one that makes no compromises with the system – but is, purely from a film-making perspective, one of the best movies I have seen in some time. ... The story takes place in a 21st century England that is ruled by the most vicious of tyrants, played by John Hurt. In his regime, people are continually reminded that a state-imposed curfew is 'for your protection' ... Into this setting steps the hero, 'V' – played by Hugo Weaving – a man who had been brutalized by statist functionaries, and who is intent on destroying this most inhumane, fascistic state.
Related Topics: Anarchism, Terrorism
V for Vendetta, by Wendy McElroy, 31 Jul 2010
Review of V for Vendetta (2006) both as a movie and as a political statement, comparing it to The Count of Monte Cristo (1934) (which is shown in some scenes)

The movie V for Vendetta (V) is a thriller set in London's dystopian future of 2020 ... Since V was presented both as a movie and as a political statement, it is appropriate to address its artistic value and its politics separately. For me, the dual approach is doubly important because I enjoyed V the movie and disliked V the political statement. As a movie, I found V to be engaging, often original, visually stunning but ultimately flawed; it was a good ride that could have been great one if the scripting had been better. As a political statement, I thought V was not at all libertarian, as so many have claimed.
Related Topics: Anarchism, Libertarianism, Politics, Rights
V for Vendetta (2006), by Stephen W. Carson

Based on an explicitly anarchist comic book by Alan Moore, the film is somewhat less explicit about its anarchism but entirely clear on the theme of freedom and what it requires. It is fear that keeps the people cowering before their tyrannical government. The masked "V" of the film gets people's attention through spectacular, violent pranks that teach them to distrust and ridicule the government. This film is truly interesting and challenging, with enough ideas to keep people discussing the film for years to come.

The introductory paragraph uses material from the Wikipedia article "V for Vendetta (film)" as of 15 Oct 2018, which is released under the Creative Commons Attribution-Share-Alike License 3.0.