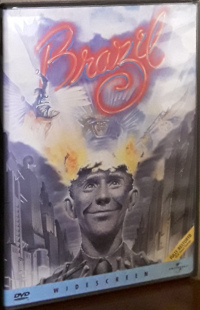 Brazil is a 1985 dystopian science fiction film directed by Terry Gilliam and written by Gilliam, Charles McKeown and Tom Stoppard. The film stars Jonathan Pryce and features Robert De Niro, Kim Greist, Michael Palin, Katherine Helmond, Bob Hoskins and Ian Holm. The film centers on Sam Lowry, a low-ranking bureaucrat trying to find a woman who appears in his dreams while he is working in a mind-numbing job and living in a small apartment, set in a dystopian world in which there is an over-reliance on poorly maintained (and rather whimsical) machines. Brazil's satire of technocracy, bureaucracy, hyper-surveillance, corporate statism and state capitalism is reminiscent of George Orwell's 1949 novel Nineteen Eighty-Four, and has been called Kafkaesque, as well as absurdist.

1. Brazil (1985). Watch the painful inner workings of a futuristic bureaucracy where individualism is crushed. Directed by Monty Python alum Terry Gilliam, the movie is a surrealistic view of a society in which everything seems to be run by a kind of global DMV. Trying to fix a bureaucratic snafu that led to the arrest of the wrong man, lowly bureaucrat Sam Lowry becomes himself the enemy of the state. Brazil is a zany classic of the libertarian belief in the importance of individual's dignity and freedom against an all-powerful government. Given the increase in government of recent years, it's even more chilling than when first released 13 years ago.
Related Topics: Braveheart, Casablanca, Duck Soup, Fahrenheit 451, The Fountainhead, Freedom's Flicks, The Godfather, Gone With the Wind, Invasion of the Body Snatchers, A Man for All Seasons, Network, Ninotchka, One Flew Over the Cuckoo's Nest, The Quiet Man, Schindler's List, The Searchers, Sleeper, Star Wars, The Ten Commandments, What About Bob?

There are definite moments of quirky humour, but make no mistake, the oppressive government in this film is portrayed in a suitably dark light ... Don't miss Robert DeNiro as the heroic black market entrepreneur who keeps one step ahead of the government so that he can do good home repairs without all the bureaucracy.
Brazil (1985)
by Jon Osborne, Miss Liberty's Guide to Film and Video, 2001

... this film portrays a bleak totalitarian future. That future includes elements from the recent Nazi and Soviet past: authoritarian-style art, militaristic outfits, torture, and absurd bureaucracy. It also includes elements from the present American situation: suddent, violent, BATF-style entrances into people's homes, vast databases of information on private individuals, and a strange public tolerance for it all. ... Director Terry Gilliam, of Monty Python fame, infuses the film with Pythonesque brand of humor—dry, British, and sometimes bizarre.
Imagine a Boot Stamping on Your Face, by John W. Whitehead, 7 Jul 2017
Discusses what the author considers a police state in 2017 United States and provides short reviews of 15 films that "may be the best representation of what we now face as a society"

Sharing a similar vision of the near future as 1984 and Franz Kafka’s novel The Trial, this is arguably director Terry Gilliam's best work, one replete with a merging of the fantastic and stark reality. Here, a mother-dominated, hapless clerk takes refuge in flights of fantasy to escape the ordinary drabness of life. Caught within the chaotic tentacles of a police state, the longing for more innocent, free times lies behind the vicious surface of this film.
Related Topics: George Orwell, Right Against Unreasonable Searches and Seizures, Fahrenheit 451, The Matrix, Minority Report, V for Vendetta

The introductory paragraph uses material from the Wikipedia article "Brazil (1985 film)" as of 16 Jan 2023, which is released under the Creative Commons Attribution-Share-Alike License 3.0.