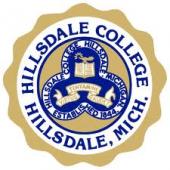 Hillsdale College is a private, conservative Christian college in Hillsdale, Michigan, United States. According to its website, its liberal arts curriculum is based on the Western heritage as a product of both the Greco-Roman culture and the Judeo-Christian tradition. Hillsdale requires every student, regardless of major, to complete a core curriculum that includes courses on the Great Books and the U.S. Constitution. The college declines to accept federal financial support, but depends heavily on donations from major donors.

[Ludwig von Mises] stimulated the interest, and then the understanding of all the people he met. And he did even more. He stimulated them to action ... Out of [the Foundation for Economic Education] came great men like ... George Roche, who is now president of Hillsdale College, which shelters the Ludwig von Mises Library, and who heads his own Shavano Institute in Colorado, never asking for help from the government.
Related Topics: Atlas Network, Foundation for Economic Education, The Freeman, Grove City College, Friedrich Hayek, Human Action, Israel Kirzner, Mises Institute, Ludwig von Mises, Lew Rockwell, Murray Rothbard, Hans Sennholz
Paul Poirot, RIP, by Gary North, 21 Feb 2006
Memorial essay

Based on my articles, 1967-71, Read hired me in 1971 to replace George Roche. Roche had just been appointed president of Hillsdale College. He immediately hired Lew Rockwell to imitate Poirot's strategy, using a newsletter, Imprimis, as a Freeman substitute: a free publication used to generate donations. It became the most financially successful newsletter in history, raising hundreds of millions of dollars for a college whose faculty was not as committed to the free market as Imprimis was.
Related Topics: Foundation for Economic Education, The Freeman, Paul L. Poirot, Leonard Read

The introductory paragraph uses material from the Wikipedia article "Hillsdale College" as of 14 May 2018, which is released under the Creative Commons Attribution-Share-Alike License 3.0.