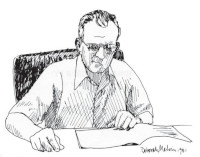 Floyd Arthur 'Baldy' Harper, RIP, by Murray N. Rothbard, The Libertarian Forum, May 1973
Biographical remembrance of "Baldy" including his involvement in the Foundation for Economic Education (FEE), the Volker Fund and the Institute for Humane Studies (IHS)

[Baldy] was a member of a veritable "lost generation" from the libertarian point of view ... And so Baldy simply set out, in his quiet and gentle way, to create a body of students and followers. In those early days at FEE, for example, almost every staff member had been brought into the movement by Baldy: W.M. Curtiss, Paul Poirot, Ivan Bierly, Ellis Lamborn, all students of Baldy at Cornell. Baldy was indeed a notable inspiration and guide for young people, and his followers are now everywhere in the libertarian world.
Related Topics: Anarcho-Capitalism, Foundation for Economic Education, F. A. Harper, Institute for Humane Studies, Libertarianism
Paul Poirot, RIP, by Gary North, 21 Feb 2006
Memorial essay, focusing mostly on Poirot's role as editor of The Freeman

Paul Poirot edited the incarnation of The Freeman ... from the little magazine's inception in 1955 until his retirement in 1987. ... Poirot had a Ph.D. in economics from Cornell. ... Poirot had a wry sense of humor that he could tap instantaneously. ... He did not use an editor's familiar blue pencil. He did not re-write articles. He simply sent them back, with a brief note suggesting a possible change, or maybe nothing at all if he was not interested ... Poirot's legacy is a generation of people who learned the basics of free market economics from The Freeman.
Related Topics: Conservatism, Foundation for Economic Education, The Freeman, Barry Goldwater, Hillsdale College, Leonard Read, Ronald Reagan
The Primacy of Freedom, by Brian Summers, The Freeman, Feb 1988
One of over 20 essays in the anthology Ideas on Liberty: Essays in Honor of Paul L. Poirot (1987), discussing why the freedom philosophy and economic and moral education are important

Now, as we mark the retirement of Dr. Paul L. Poirot, who has contributed so much time, energy, and wisdom to the cause of liberty, it is perhaps appropriate for each of us to ask himself: Why should I follow this man's lead ...? ... [F]or more than thirty years, Paul Poirot and his various authors did a masterful job of explaining moral principles and showing how they apply to public issues as well as to private matters ... Let us thus ... thank Paul Poirot for his tireless efforts, his wise counsel, and his steadfast commitment to the highest principles ...
Related Topics: Economics, Foundation for Economic Education, The Freeman, Government, Health Care, Liberty, Technology

I would not push the illiberal no­tion than any individual is like any other. It is because of our differences that liberty is so vital. But Baldy did adhere to the guiding rule of Soc­rates, 'Know thyself.' He believed with Socrates that goodness is based on knowledge, wickedness on igno­rance. ... Much of Baldy’s life was devoted to exposure of these frustrations of the free market economy and these limitations on freedom. And that is a never-ending task. Fortunately for us, we have his record and example of the ideal of a free man toward which to strive.
Related Topics: Free Market, F. A. Harper, Money, Prices, Private Property