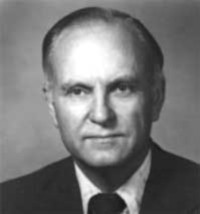 Hans F. Sennholz (3 February 1922 – 23 June 2007) was a German-born American Austrian School economist and prolific author who studied under Ludwig von Mises. A Luftwaffe pilot during World War II, he was shot down over North Africa on 31 August 1942, and spent the remainder of the war in a POW camp in the United States.

[Ludwig von Mises] stimulated the interest, and then the understanding of all the people he met. And he did even more. He stimulated them to action ... Think of Dr. Hans Sennholz, who is chairman of the economics department at Grove City College, a great traveler and lecturer who educates one student after another in Mises' ideas.
Related Topics: Atlas Network, Foundation for Economic Education, The Freeman, Grove City College, Friedrich Hayek, Hillsdale College, Human Action, Israel Kirzner, Mises Institute, Ludwig von Mises, Lew Rockwell, Murray Rothbard
A Fairy Tale of the Austrian Movement, by Joseph Salerno, Mises Daily, 25 Sep 2007
Review of Brian Doherty's Radicals for Capitalism (2007), in particular of the section in chapter 7 where Peter Boettke discusses Austrian economics

Boettke attended Grove City College as an undergraduate, where his mentor was the late Hans Sennholz who received his doctorate under Mises and was a charismatic and skilled teacher of Austrian economics. Sennholz also made a number of important contributions to technical Austrian economics in his published writings. But the young Boettke was evidently more impressed with the ideological aspects of Sennholz's teaching ... Boettke also remarked, "Sennholz could get you hyped up on your ability to walk through fire for the truth" (Doherty 2007, p. 423).
Related Topics: Peter Boettke, Austrian Economics, George Mason University, Libertarianism, Ludwig von Mises, Murray Rothbard
How I Became a Liberal, by Alejandro Chafuen, 19 Dec 2003
Part of Walter Block's autobiography series; Chafuen recalls his grandparents and parents, his youth in Argentina, and the people in Argentina and the United States who influenced him

Benegas invited ... Hans F. Sennholz, to Argentina ... it would be Leonard Read and Sennholz who were to have the biggest influence on my road to liberty ... In 1976 Benegas Lynch asked me if I would be willing to translate for Dr. Sennholz at several private speaking events. I was happy to volunteer my services. During one of those conversations, Dr. Sennholz asked me about my goal in life. I answered that I wanted to be a tennis pro in order to earn enough money to keep disseminating the values of the free society. Hans asked me "why don't I teach." I laughed ... The low pay of university professors was not enough to sustain anyone ...
Related Topics: Argentina, Foundation for Economic Education, Grove City College, Mont Pelerin Society, Ayn Rand

Milton Friedman, 1912-2006, 7 Dec 2006
Memorial essay, but critical of professor Friedman's advocacy of monetary policies which would leave money issuance in hands of the government

Few American economists have wielded as much influence on economic thought and policy as the late Milton Friedman. He was an articulate and ardent advocate of free markets and personal liberty. In 1962, his Capitalism and Freedom, which continues to be in print with nearly one million copies sold, pointed the way not only to economic but also political freedom. ... What Professor Friedman called the 'dethroning' of gold ... made the U.S. dollar the world currency, elevated the Federal Reserve System to the world central bank, and inundated the world with U.S. dollars.
Related Topics: Banking, Milton Friedman, Gold Standard, Money
Protectionism and Unemployment, The Freeman, Mar 1985
Discusses why foreign and domestic trade are both beneficial, mercantilism and neo-mercantilism, the groups wanting tariffs and protectionism, the effects of trade restrictions on labor, the factors affecting industry competitiveness and more

There is a disturbing thing about foreign affairs: they are foreign. ... Foreign matters are viewed with suspicion, yea, even dislike and contempt. Protectionism, which proposes to use the authority of government and its instruments of coercion to restrict trade with foreigners, builds on this psychological foundation. ... Economists do know, however, that mass unemployment, no matter how painful it may be, cannot be placed on the doorsteps of foreigners. It is a self-inflicted evil of radical interventionism that cannot be alleviated by beggar-thy-neighbor policies. Protectionism only exacerbates it.
Related Topics: Law of Comparative Advantage, Free Trade, Japan, Labor, Unemployment, United States
Under the Shadow of Inflationomics, Mises Daily, 1 Jun 2006
Explains how inflation has its roots in central banking and fiat money, and describes the influence of Keynesian economics on the policies of U.S. presidents from Richard Nixon to George W. Bush

Inflationomics, in popular terminology, indicates the sway of inflation thought in education and the affairs of government. It permeates political life and behavior, especially when economic policies are discussed and decided. ... In crisis and bedlam, Washington politicos are likely to add their controls and regulations, conditions and restrictions, prohibitions and penalties to the structure they created. In the footsteps of President Herbert Hoover, President Bush may even call for more trade barriers, which would turn the recession into a depression and breed much international conflict.
Related Topics: George H. W. Bush, George W. Bush, Jimmy Carter, Central Banking, Bill Clinton, Gold Standard, Inflation, Money, Richard Nixon, Ronald Reagan
Why is Medical Care so Expensive?, Mises Daily, 22 Aug 2006
Discusses various explanations given for the explosion in medical expenses and then focuses on some of the more likely culprits behind the increased costs

Medical expenses are rising faster than the costs of any other service. They are climbing at rates that exceed not only those of inflation and dollar depreciation but even the Federal government itself. In fact, they are consuming an ever larger share of personal and national incomes. ... Some courageous observers may even point to needless expenditures and waste as every health-care administrator may want to expand and improve his facilities. After all, they no longer are limited by market orders but only by political considerations and favors.
Related Topics: Health Care, Politics, Taxation, Technology

The introductory paragraph uses material from the Wikipedia article "Hans Sennholz" as of 12 Sep 2017, which is released under the Creative Commons Attribution-Share-Alike License 3.0.