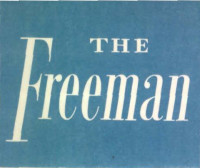 The Freeman (published also as The Freeman: Ideas on Liberty and Ideas on Liberty) was an American libertarian magazine, formerly published by the Foundation for Economic Education (FEE). It was founded in 1950 by John Chamberlain, Henry Hazlitt and Suzanne La Follette. The magazine was purchased by a FEE-owned company in 1954, and FEE took over direct control of the magazine in 1956. In September 2016, FEE announced it would permanently end publication of The Freeman.

When the Freeman first appeared on 2 October 1950, it was carrying on a distinguished history of political journalism. ... The Freeman restedd its perspective firmly on the classical liberal tradition. These were succinctly set forth in an important editorial in the first issue written by Henry Hazlitt ... As part of the Foundation for Economic Education, the Freeman has been a strong voice for classical liberalism and free market principles.

In 1950, Nock's former editorial associate Suzanne La Follette joined with Life editor John Chamberlain and Newsweek columnist Henry Hazlitt to launch another Freeman—this time, as a biweekly. But by 1954, the editors were split between those (like Henry Hazlitt) who wanted to focus on economic freedom ... The distinguished contributors included William F. Buckley Jr., Frank Chodorov, John T. Flynn, F.A. Hayek, Ludwig von Mises, and Wilhelm Röpke ... Leonard E. Read's Foundation for Economic Education acquired The Freeman, pumped money into it, went to a monthly schedule, retained Chodorov as its first editor, and has issued it ever since.
Related Topics: Frank Chodorov, Economic Freedom, Compulsory Education, The Freeman, Henry George, Germany, Thomas Jefferson, Learning, H. L. Mencken, Albert Jay Nock, Franz Oppenheimer, Franklin D. Roosevelt, The State, Woodrow Wilson, World War I
A Call to Activism, by Margit von Mises, The Free Market, Jun 1984
Speech delivered 27 Feb 1984 at a Mises Institute dinner in her honor; relates how she wrote My Years With Ludwig von Mises, then calling her late husband, Ludwig von Mises, an "activist of the mind" and encouraging others to become likewise

Is it idle ... to dream of a day when knowledge instead of ignorance, respect instead of hate, peace instead of war, freedom instead of force, will reign over the world? ... I can see an anthology of my husband's thoughts published in a series of books dealing with specific issues that are getting attention in the daily press. The special edition of the Freeman magazine that appeared on the 100th anniversary of my husband's birthday indicates the possibilities I see in this direction.
Related Topics: Atlas Network, Foundation for Economic Education, Grove City College, F. A. Hayek, Hillsdale College, Human Action, Israel Kirzner, Mises Institute, Ludwig von Mises, Lew Rockwell, Murray N. Rothbard, Hans Sennholz
The Early History of FEE, by Henry Hazlitt, The Freeman, Mar 1984
Excerpted from Hazlitt's remarks at the Leonard E. Read Memorial Conference on Freedom, November 1983; reprinted in the May 2006 issue, including photos of early FEE senior staff

Leonard's first move was to publish an outline of the aims of the Foundation and its proposed activities. He listed no fewer than fourteen of these ... I condense them here: ... (5) a journal (this was realized in mid-1954 when FEE took over The Freeman ... Leonard was long eager to have FEE publish a monthly magazine. His ambition was fulfilled in 1954 when he took over The Freeman, which John Chamberlain and I had been editing as a fortnightly. Since then The Freeman has published many admirable articles, and has become an imperative part of FEE's activities.
Related Topics: Atlas Network, Manuel Ayau, Foundation for Economic Education, Universidad Francisco Marroquín, Milton Friedman, F. A. Harper, F. A. Hayek, The Law, Ludwig von Mises, Mont Pelerin Society, Leonard Read, George Stigler, The Wealth of Nations
Frank Chodorov: A Libertarian's Libertarian, by Joseph R. Stromberg, 30 Nov 1999
Biographical essay on Frank Chodorov with emphasis on his foreign policy views, and his debates about the Cold War with William F. Buckley Jr. and William S. Schlamm in the pages of The Freeman

In 1954-1955, Chodorov edited the new Freeman, published by the Foundation for Economic Education ... In the August 1954 Freeman there was something of a debate between young William F. Buckley, Jr., paladin of the interventionist new right, and Chodorov. Buckley wrote that 'to beat the Soviet Union we must, to an extent, imitate the Soviet Union' – with conscription, higher taxes, and bureaucracy. ... Chodorov 'replied,' in effect, that communism was an idea, that could not be killed by military means. All we could kill would be 'natives' of other countries, who happened to believe in that unworkable idea ...
Related Topics: analysis, Frank Chodorov, Cold War, Communism, Europe, Henry George, Imperialism
Joan Kennedy Taylor, by Jeff Riggenbach, 14 Jan 2011
Biographical essay, including a review of Taylor's book Reclaiming the Mainstream: Individualist Feminism Rediscovered; transcript of "The Libertarian Tradition" podcasts of 28 Dec 2010 and 12 Jan 2011

When Joan left the Manhattan Institute, she moved on to the Foundation for Economic Education, where she served as an editor of The Freeman, the original magazine of the modern American libertarian movement, a magazine that was around 35 years old when Joan was working on it in the 1980s and is now rapidly approaching its 60th anniversary.
Related Topics: Association of Libertarian Feminists, Cato Institute, Roy Childs, William Lloyd Garrison, Libertarianism, Libertarian Party, Right to Petition the Government, Ayn Rand, Joan Kennedy Taylor
Memoirs of a Simple Honorable Man, by Charles H. Hamilton, The Freeman, Nov 1992
Biographical and bibliographical essay, discussing some of the book reviews made in 1950-54 republished in The Turnabout Years (1991)

Readers of The Freeman know John's monthly book review column, 'A Reviewer’s Notebook.' It has been a staple since FEE began publishing The Freeman in 1954. He missed the first issue in July of that year but continues his column today—though not on the same rigorous monthly schedule he maintained for nearly 35 years! Thus, it would be an easy mistake to take John for granted, or to think of him only in his important role as 'our' Freeman reviewer. The reviews in this new collection are from an earlier Freeman, the immediate predecessor of FEE's publication.
Related Topics: John Chamberlain, Politics
Paul Poirot, RIP, by Gary North, 21 Feb 2006
Memorial essay, focusing mostly on Poirot's role as editor of The Freeman

How many Americans over age 50 can say, "I became a free market believer when someone handed me a copy of The Freeman"? Thousands, I suspect. I was one. I have heard many other people tell me the same thing. The Freeman was the recruiting tool of choice, as well as a readable monthly reinforcement that reminded its readers, "No, you have not lost your mind. Yes, the government's latest attempt to make the economy better has failed. Again." ... The Freeman reflected his sense of what would best serve readers and donors. Its articles were always readable. Some might include footnotes and be several pages long.
Related Topics: Conservatism, Foundation for Economic Education, Barry Goldwater, Hillsdale College, Paul L. Poirot, Leonard Read, Ronald Reagan
The Power of Persuasion, by Jeff Riggenbach, Mises Daily, 20 May 2011
Historical account of the Persuasion magazine, edited by Joan Kennedy Taylor between Sept 1964 and May 1968

[The] monthly Freeman, published by the Foundation for Economic Education in Irvington, New York, a short ride up the Hudson from New York City ... The Freeman devoted itself to publishing homilies about the market and free trade while doing its best never to offend anyone. Yet it alone among the five or six libertarian publications in existence in the United States in 1967 had the circulation and the financial resources to even consider the idea of sponsoring a pair of conferences.
Related Topics: Conservatism, Milton Friedman, Objectivism, Ayn Rand, Ronald Reagan, Republican Party, Murray N. Rothbard, Joan Kennedy Taylor
The Primacy of Freedom, by Brian Summers, The Freeman, Feb 1988
One of over 20 essays in the anthology Ideas on Liberty: Essays in Honor of Paul L. Poirot (1987), discussing why the freedom philosophy and economic and moral education are important

These questions have been raised and answered ... in the pages of The Freeman, FEE's various books and ... lectures and seminars ... The difficulty is in getting [people] to see that the free market, private property, limited government system is the only social system in keeping with sound moral principles ... By and large, The Freeman has been the only publication doing this vitally important work of attracting people to the freedom philosophy by presenting the free market, private property, limited government system as an ideal moral system—one we would want our children to inherit.
Related Topics: Economics, Foundation for Economic Education, Government, Health Care, Liberty, Paul L. Poirot, Technology

A Reviewer Remembered: John Chamberlain 1903-1995, by Edmund A. Opitz, The Freeman, Jun 1995
Memorial and biographical essay

In 1950 a small group of men–[Foundation for Economic Education] Trustees mostly–established The Freeman, reviving the name that had been used by a periodical edited by Nock from 1920 to 1924. The editors were John Chamberlain, Suzanne La Follette, and Henry Hazlitt. John had a book review section in every issue and numerous articles, which were published in a 1991 book, The Turnabout Years: America's Cultural Life, 1900-1950. After the magazine was taken over by FEE in 1956, John continued his column, "A Reviewer's Notebook."
Related Topics: Capitalism, John Chamberlain, Albert Jay Nock
Spotlight: Founding Father, by Patrick Cox, Reason, Aug 1980
Brief profile of Leonard Read, his accomplishments, his influence and his outlook for the future of liberty

In 1946, Read formed the Foundation for Economic Education (FEE) and took over Albert J. Nock's failed magazine, The Freeman [Note: The Freeman was taken over by FEE in 1956, and it was not directly descended from Nock's publication] ... FEE's innocuous little magazine, The Freeman, has circulated in many unlikely places. A recent photo of Ronald Reagan showed him holding an issue in his hand. The Queen Mother and Prince Philip are on the list of subscribers.
Related Topics: Brazil, Conservatism, Foundation for Economic Education, Leonard Read

The introductory paragraph uses material from the Wikipedia article "The Freeman" as of 9 Sep 2022, which is released under the Creative Commons Attribution-Share-Alike License 3.0.