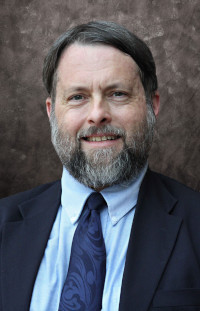 Douglas "Doug" Bandow (born c. 1954) is an American political writer, currently working as a Senior Fellow at the Cato Institute. In 2005, Bandow was forced to resign from the Cato Institute after it was revealed that for over ten years, he accepted payments in exchange for publishing articles favorable to various clients. Bandow referred to these activities as "a lapse of judgment" and said that he accepted payments for "between 12 and 24 articles", with each article costing approximately $2,000. Bandow was subsequently allowed to return to Cato.

Doug Bandow is vice president of policy at Citizen Outreach, the Cobden Fellow in International Economics at the Institute for Policy Innovation, a senior fellow at the Cato Institute, and serves as adjunct scholar for The Future of Freedom Foundation. He is a former special assistant to President Reagan; he is also a graduate of Stanford Law School and a member of the California and D.C. bars.
Doug Bandow | Cato Institute
Staff page at the Cato Institute, include photograph, profile and links to books, articles and other media

Doug Bandow is a senior fellow at the Cato Institute, specializing in foreign policy and civil liberties. He worked as special assistant to President Ronald Reagan and editor of the political magazine Inquiry. He writes regularly for leading publications such as Fortune magazine, National Interest, the Wall Street Journal, and the Washington Times. Bandow speaks frequently at academic conferences, on college campuses, and to business groups. Bandow has been a regular commentator on ABC, CBS, NBC, CNN, Fox News Channel, and MSNBC. He holds a JD from Stanford University.
Doug Bandow - Libertarian
Celebrity page at Advocates for Self-Government; includes picture, biographical summary, list of some of his books and quotes

Doug Bandow's hard-hitting and consistently libertarian column is syndicated nationally by Copley News Service. In addition, he has written for Harper's, The New Republic, Washington Post, New York Times, The Wall Street Journal, the American Spectator, USA Today, and many, many other magazines and newspapers. He is a Senior Fellow at the Cato Institute. He served as special assistant to President Ronald Reagan in the early 1980's, left disillusioned, and later wrote how that administration had betrayed its promise of less government and lower taxes.

In the bad way [to sell ideas], you can take money in exchange for which you will say anything. Now, to be fair to Doug Bandow, he most certainly did not do the latter. ... [H]e stands "accused" of having written op-eds that elicited payment from Jack Abramoff ... Bandow wrote favorably on behalf of the Northern Mariana Islands and its industry's desire to continue to be unregulated by US labor law. The method is seedy ... but the goal is good. ... He is a libertarian after all, one of the more principled writers out there, and the positions he took were not incompatible with his overall political perspective.
Related Topics: Cato Institute, Government, Libertarianism, Ludwig von Mises, Policy Institutes

Little in life is more tragic than the shooting stars, the brilliant lights who illuminate the truth and brighten people’s lives, only to flame out before the history books take note. Roy A. Childs, Jr., was one such phenomenon. A leading libertarian writer, editor, and activist, Roy was also a good friend ... Roy Childs was a treasure to all who knew him. But his life has benefited, and continues to benefit, many more people than just those who had the pleasure of meeting him ... Liberty Against Power is a fitting tribute to someone who gave so much for so long to so many.
Related Topics: Capitalism, Roy Childs, War on Drugs, Property Rights, United States
The Longest-Running War, 20 Dec 2004
Reviews the books Bad Trip: How the War on Drugs Is Destroying America (2004) by Joel Miller and Drug War Crimes: The Consequences of Prohibition (2004) by Jeffrey A. Miron

War has become a centerpiece of American politics. The war on terrorism is the focus of U.S. foreign policy. A real war is being fought in Iraq. Jimmy Carter proclaimed the "moral equivalent of war" over energy. Some analysts are advocating a war on obesity. But the longest-running ongoing "war" is the war on drugs ... While Miller and Miron might not convince the most dedicated drug warriors, they have presented a powerful case that the drug war is counterproductive. Their evidence deserves a serious response. Americans can no longer blithely assume that drug prohibition is making them safer and better off.
Related Topics: Afghanistan, War on Drugs, Prohibition
NATO's Balkans Disaster and Wilsonian Warmongering, Part 1, Freedom Daily, Jul 1999
Analyzes NATO's actions in the Kosovo War in light of the U.S. constitution, the NATO accord and the UN Charter

When ethnic Albanian guerrillas originally rejected the Rambouillet peace settlement for Kosovo fashioned by the Clinton administration, a Clinton official raged, "Here is the greatest nation on earth pleading with [them] to do something entirely in their own interest — which is to say yes to an interim agreement — and they defy us." ... Death tolls in the millions (Angola, Sudan, Rwanda, Tibet), hundreds of thousands ..., and tens of thousands ... are common. The estimated 12-month death toll of 2,000 in Kosovo was exceeded even by the number of dead in Northern Ireland's sectarian violence.
Related Topics: United States Constitution, Europe, War
NATO's Balkans Disaster and Wilsonian Warmongering, Part 2, Freedom Daily, Aug 1999
Considers possible justifications for war vis-à-vis NATO's involvement in the conflict between Yugoslavia (Serbia and Montenegro) and the Kosovo Liberation Army

The Founders vested the power to declare war in Congress because they feared presidents would do precisely what they are doing today — regularly taking the nation into overseas conflicts. It is all too easy to loose the dogs of war; it is impossible to control where they go afterwards. ... As Secretary of State John Quincy Adams observed last century, the United States should be the well-wisher of the liberty and independence of all, but does not need to "go abroad in search of monsters to destroy." To do so, he warned, would destroy the essential values that set her apart ...
Related Topics: Balkans, Europe, Russia, Serbia, War
Searching for America's Next Enemy, Mises Daily, 17 Jul 2006
Discusses attempts by some U.S. conservatives to find a new enemy nation and focuses on China as a "threat"

Peace is boring. How else to explain the search by some conservatives for a new enemy? After the Cold War the foreign policy establishment could have gratefully accepted peace, stopped meddling around the globe, and demobilized America's outsize military. Instead, it found other enemies ... There will be no more important bilateral relationship over the next century than that between the United States and China. Much depends on the ability of the two nations to overcome cultural and political differences to cooperate peacefully. The first step in doing so is for America not to go to Asia in search of enemies to combat.
Related Topics: East Asia, China, Militarism
Uncle Sam's Retirement Scam, The Freeman, Jan 2002
Examines alternatives to deal with funding the Social Security "Ponzi scheme", from raising FICA taxes, using general tax revenues, reducing benefits, engaging in an "orgy of borrowing" or allowing people to invest privately

The legendary third rail of American politics, Social Security, is lighting up. The administration has proposed to move, ever so gently, toward a private system, while a bipartisan congressional coalition is determined to keep Americans locked into an inferior retirement system. ... The alternative is what Democratic Commission member Robert Pozen calls the "do-nothing plan." Sit around while the system crumbles, then enact draconian tax hikes while cutting benefits. Such a strategy ... will wreck the retirement of the poor and disadvantaged, who foolishly relied on the government for security.
Related Topics: Social Security Tax, Taxation

The introductory paragraph uses material from the Wikipedia article "Doug Bandow" as of 6 Jun 2018, which is released under the Creative Commons Attribution-Share-Alike License 3.0.