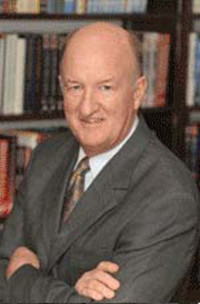 Skousen is one of today's most respected investment advisors, the editor of Forecasts & Strategies. He's a Forbes columnist, a prolific author and popular lecturer at investment conferences. ... He has compiled quite a record. ... On September 8, 1987, he sent his subscribers a special bulletin recommending the sale of all stocks and mutual fund shares, and six weeks later the stock market crashed. ... Skousen predicted the Soviet Union would collapse, and of course it did. Then he predicted that the 1990s would bring a tremendous boom, and that happened, too.
Mark Skousen Biography - MSKOUSEN.COM
Biographical summary

Mark Skousen has been on the move all his life. Born in San Diego, California, where his dad was an FBI agent, he grew up in Portland, Oregon, gaining a love for books, the outdoors and politics. ... When he graduated in 1972, he had a Master's Degree in economics, ... and a job as an economist for the Central Intelligence Agency. ... In 2001-02, Mark and his family moved to Irvington-on-Hudson, NY, ... where Mark was president of the Foundation for Economic Education ... Skousen is the founder and producer of FreedomFest, an annual conference ... billed as the world's largest gathering of free minds on liberty.

Skousen has produced popular books about investing and scholarly books about economics from an Austrian point of view. His books include ... The Economics of a Pure Gold Standard (1988), What Every Investor Should Know About Austrian Economics (1988), The Structure of Production (1990), ... Economic Logic (2000) and The Making of Modern Economics (2001). ... Skousen has done whatever he could to promote individual liberty, speaking at functions sponsored by the Cato Institute, the Foundation for Economic Education, the Libertarian Party and the Mt. Pelerin Society, among many others.

Rothbard's next project was inspired by one of Rothbard's great fans, Florida-based investment advisor Mark Skousen. He wanted an alternative to The Worldly Philosophers, a popular survey of economics by socialist Robert L. Heilbroner which had long been assigned reading in college economics courses across the country. In September 1981, Skousen met with Rothbard and his wife Joey, and he proposed that Rothbard write such a book, about 300 pages, for a $20,000 advance–half on signing and the balance upon completion. Skousen provided this through his tax-exempt foundation, The Institute for Political Economy.
Related Topics: American Revolutionary War, analysis, Walter Block, Compulsory Education, John T. Flynn, Foundation for Economic Education, Milton Friedman, Government, F. A. Harper, Karl Hess, Human Action, Manny Klausner, Libertarianism, Man, Economy, and State, Mises Institute, Ludwig von Mises, Money, Monopoly, Property Rights, Ayn Rand, Lew Rockwell, Murray Rothbard, The State, Taxation, Vietnam War
Monetary Central Planning and the State, Part 33: Murray N. Rothbard and the Case for a 100 Percent Gold Dollar, by Richard Ebeling, Future of Freedom, Sep 1999
Examines the arguments made by Rothbard in his 1962 essay "The Case for a 100 Percent Gold Dollar"

For example, Mark Skousen, in his thorough study, Economics of a Pure Gold Standard (1996), asked whether the fraud charge would be true if customers were told up front that some banks operated on a fractional-reserve basis and that they could make their deposits at a 100-percent-reserve banking institution for which they paid a fee or at one that offered them interest on their deposit but which could not guarantee continuous 100 percent redemption under certain circumstances, such as a heavy demand for withdrawals by some of these clients.
Related Topics: Banking, Money, Murray Rothbard

Franklin's Golden Rules, The Daily Reckoning, 18 May 2006
Guest essay describing how Franklin managed his finances, written upon releasing The Compleated Autobigraphy by Benjamin Franklin (2006), compiled and edited by Skousen

Benjamin Franklin made great contributions as an inventor, scientist, writer, and founding father, but he is also offered valuable advice on money matters. His is one of the greatest success stories in American history, and much of his success ... came from his experience and capabilities in the financial world. ... Remember these final words from Poor Richards: 'A long life may not be good enough, but a good life is long enough.' Near the end of his life, Franklin told friends that he wanted to be remembered for 'living a useful life,' rather than “dying rich.' It turns out that he was known for both!
Related Topics: Benjamin Franklin, United States
The Naked Truth About "Porno" Scanners, 24 Nov 2010
Criticizes the Obama administration's decision to install "full body" scanners in airports or alternatively invasive "pat-downs"

There must be a law like Murphy’s Law that states that government agencies with excessive authority inevitably go overboard in their regulations. Remember the year in the 1980s when the Federal Transportation Agency imposed an ignition device on new cars so that the engine wouldn't start unless the driver wore his seat belt? Citizens objected so vociferously that the government quickly reversed itself. ... Next up: TSA is now pushing for the random 'secondary screening,' in which you are taken to 'the cage' and subjected to even further invasions of privacy. When will this idiocy end?
Related Topics: Cool Hand Luke, Right Against Unreasonable Searches and Seizures
Persuasion vs. Force, Liberty, Sep 1991
Based on an essay by Alfred North Whitehead, Skousen suggests a new libertarian creed, "The triumph of persuasion over force is the sign of a civilized society"

Sometimes a single book or even a short cogent essay can change an individual's entire outlook on life. For Christians, it is the New Testament. For radical socialists, it may be Karl Marx and Friedrich Engels' The Communist Manifesto. For libertarians, it may be Ayn Rand's Atlas Shrugged. For economists, it may be Ludwig von Mises’ Human Action. ... I have a vision of a free society, not because of a benevolent dictator commands it, but because we love freedom and the responsibility that goes with it. ... these words ... express the aspiration of every man and every woman in a free society.
Related Topics: Right to Keep and Bear Arms, War on Drugs, Compulsory Education, Libertarianism, Personal Responsibility, Taxation
Ricardo, David (1772-1823), The Encyclopedia of Libertarianism, 15 Aug 2008
Biographical essay

David Ricardo was a brilliant classical economist. His policies of free trade and hard money helped propel Britain into its role as 'workshop of the world' and as an industrial giant, yet his labor theory of value and antagonistic model of capitalism proved misguided and gave unexpected support to the Marxists and socialists. ... Ricardo's dismal science, together with the doctrines of his friend, Thomas Malthus, moved economics away from Adam Smith's invisible hand with its harmony of interests and onto a path of class antagonism and exploitation, giving ammunition to socialist and Marxist causes.
Related Topics: David Ricardo, Wages

Economic Logic, 2000
Partial contents: What is Economics? - The Foundations of Economic Behavior - Production and Consumption: The Structure of Economic Activity - The Theory of the Firm: The Role of Profit and Loss - Macroeconomics - Government Policy - What Do Economists Do
Related Topic: Economics
The Making of Modern Economics: The Lives and Ideas of the Great Thinkers, 2001
Partial contents: It All Started with Adam - The French Connection - The Irreverent Malthus - Tricky Ricardo - Milling Around - Marx Madness - Menger and the Austrians - Marshalling the Troops - The Missing Mises - The Keynes Mutiny - Milton's Paradise
Related Topic: Economics
What Every Investor Should Know About Austrian Economics and the Hard Money Movement
by Mark Skousen, Mises Institute, 1988
Pamphlet size; published by LvMI (1988) and FEE (1995) and now a chapter in A Viennese Waltz Down Wall Street (2013)

In addition to the gold standard, the hard-money camp also has an ideological foundation in free-market Austrian economics.
Related Topic: Austrian Economics

Ben Franklin: Conservative, Libertarian, or Radical Democrat?, by David Boaz (moderator), Mark Skousen (speaker), 19 Jan 2006
Book Forum hosted by Boaz, with presentation by Skousen discussing Franklin's Autobiography, Skousen's The Compleated Autobiography of Benjamin Franklin and under what political viewpoint would one categorize Franklin
Related Topic: Benjamin Franklin
Is Adam Smith the Father of Economics and Free-Market Capitalism? [Reason Podcast], by Nick Gillespie, Naomi Brockwell (moderator), Gene Epstein, Mark Skousen, 5 Jul 2017
Report, audio and transcript of the debate, held on 13 Jun 2017, on the resolution "Adam Smith should be honored as the founder of modern economics and free-enterprise capitalism" between Mark Skousen for the affirmative and Gene Epstein for the negative

In February 1793, the British Empire was in crisis. Over the past 10 years, the United Kingdom, the greatest military power in the world had lost its most valued colonies to a makeshift army of American ruffians and was near bankruptcy. ... Lord North had been replaced by a very young but dependable Prime Minister, the Lord of the Treasury William Pitt, the younger. ... he was a student the new political economy, the new doctrine of economic liberalism. ... the system of natural liberty advocated by a Scottish professor of moral philosophy who had gained immortality with the publication of a big, fat book ...
Related Topics: Richard Cantillon, Murray Rothbard, Adam Smith

The introductory paragraph uses material from the Wikipedia article "Mark Skousen" as of 18 May 2018, which is released under the Creative Commons Attribution-Share-Alike License 3.0.