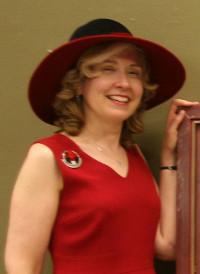 About - Virginia Postrel
Autobiographical profile at her personal website

Virginia Postrel (pron. PAH-STRELL) is an author, columnist, and speaker whose work spans a broad range of topics, from social science to fashion, concentrating on the intersection of culture, commerce, and technology. Writing in Vanity Fair, Sam Tanenhaus described her as "a master D.J. who sequences the latest riffs from the hard sciences, the social sciences, business, and technology, to name only a few sources." ... From July 1989 to January 2000, Postrel was the editor of Reason magazine. Under her leadership, Reason was a finalist for the National Magazine Awards, the industry's highest honor ...
Advocates for Self-Government - Libertarian Education: Virginia Postrel - Libertarian, by Bill Winter
Includes picture, profile and quote

Virginia Postrel accomplished something that few other writers have: She helped redefine the debate between liberitarians and supporters of big government. In her 1998 book, The Future and Its Enemies: The Growing Conflict Over Creativity, Enterprise and Progress (The Free Press), Postrel argued that most political debates are not between liberals and conservatives, but between "dynamists" and "stasists." ... Postrel makes it clear where she stands. She advocates a "a world of constant creation, discovery, and competition" where the future is built bottom-up by individuals, not mandated top-down by politicians.

That criticism [of Hayek] has now been met by Virginia Postrel in her recent book, The Future and Its Enemies. Though she does not say so in so many words, her goal clearly is to take Hayek's defense of a free social order without central government design and show how the spontaneous order of society has improved the human condition and how it can be hindered only by those who desire to consciously direct the evolution of technology, innovation, and discovery ... Postrel demonstrates the nature of this dynamic process with one detailed historical example after another.
Related Topics: F. A. Hayek, Learning, Society
Radicals for Capitalism: A Freewheeling History of the Modern American Libertarian Movement, by David Gordon, The Mises Review, Dec 2007
Critical and (self-admittedly) "unfair review" of Brian Doherty's Radicals for Capitalism (2007)

Again, in a manner that will delight Mrs. Virginia Postrel, Doherty remarks:

Advances in technology have made possible new wired worlds where governments might be unnecessary, new biological abilities have expanded our potential power over ourselves and our environments to almost godlike status. We may even be on the cusp of creating new societies off the surface of the planet itself. (p. 4)

... It is a particular point of view, again insinuated as part of a libertarian consensus when it is not. [For some criticisms of this viewpoint, see my review of Virginia Postrel, The Future and Its Enemies ...]
Related Topics: Cato Institute, United States Constitution, Libertarianism, Mises Institute, Ron Paul, Ayn Rand, Reason Foundation, Murray N. Rothbard, War

Adam Smith Needs a Paper Clip, Reason, May 2017
A short history of pins as fasteners from Adam Smith in the late 18th century to the invention of the paper clip at the turn of the 19th century

Adam Smith famously used a pin factory to illustrate the advantages of specialization, choosing this "very trifling manufacture" because the different tasks were performed under one roof ... By improving workers' skills and encouraging purpose-built machinery, the division of labor leads to miraculous productivity gains. ... In 1899, an inventor in the pin-making capital of Waterbury, Connecticut, patented a "machine for making paper clips." William Middlebrook's patent application, observed Henry Petroski in The Evolution of Useful Things, "showed a perfectly proportioned Gem."
Related Topics: Free trade, Adam Smith, The Wealth of Nations
Friedrich the Great, The Boston Globe, 11 Jan 2004
Biographical essay, including Hayek's insights on cognitive science and his influence on postmodernism

At a recent think-tank luncheon in Raleigh, economist Bruce J. Caldwell chatted with a local lawyer active in Democratic party circles. The man asked Caldwell what his new book was about. "It's an intellectual biography of Friedrich Hayek," replied Caldwell, a professor at the University of North Carolina, Greensboro. He got a blank look. ... Hayek and postmodern philosophers were troubled by many of the same issues, but they came to different conclusions. "I don't view him as a postmodernist in the way that some interpreters have," says Caldwell. However, he adds, "I think they had similar enemies."
Related Topics: Milton Friedman, Nick Gillespie, F. A. Hayek, Money, Prices, The Road to Serfdom

Hurricane Camille swept into American culture five years ago with the publication of Sexual Personae, a learned 800-page treatise on sex, art, and literature through the ages. After two decades of rejection and obscurity, Camille Paglia was famous. Her demanding master work wasn't exactly accessible to the educated lay reader, but it became a bestseller—as have her subsequent reader-friendly essay collections Sex, Art, and American Culture and Vamps & Tramps ... Paglia still teaches classes and gives exams at The University of the Arts in Philadelphia where she's a professor of humanities.
Related Topics: Capitalism, Bill Clinton, Libertarianism, Philosophy, Ayn Rand
The Peters Principles: An Interview with Tom Peters: The management guru as playground director, provocateur, and passionate defender of open societies., by Tom Peters, Virginia Postrel, Reason, Oct 1997
Topics discussed include: Peters' public persona, Robert McNamara, Hayek, Silicon Valley, corporate planning, his political views, Republicans vs. Democrats, technological change, nostalgia for the 1950s and the future of business

Tom Peters dots his articles with exclamation points, ellipses, and WORDS IN ALL CAPS. He tends toward sweeping, barely supported statements ("Women are smarter than men," he generalized in Forbes ASAP) and uses the word revolution a lot ... Those postmodern virtues are, it turns out, pretty much what the Hayekian market looks like: "The corporation...as we knew/know it...is dead!" writes Peters in characteristic style. "The market as Hayek knew it and loved it is alive, well, getting better and hopelessly inexplicable! Long live...God knows what! Playground directors united! Ready. Fire. Aim."
Related Topics: Business, Entrepreneurship, Benjamin Franklin, F. A. Hayek, Republican Party

The Future and Its Enemies: The Growing Conflict Over Creativity, Enterprise, and Progress, 1998
Contents: Introduction: The Search for Tomorrow - The One Best Way - The Party of Life - The Infinite Series - The Tree of Knowledge - The Bonds of Life - Creating Nature - Fields of Play - On the Verge

The introductory paragraph uses material from the Wikipedia article "Virginia Postrel" as of 14 Apr 2018, which is released under the Creative Commons Attribution-Share-Alike License 3.0.