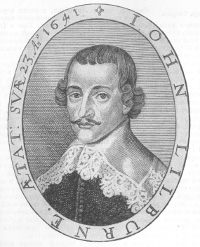 John Lilburne (1614 – 29 August 1657), also known as Freeborn John, was an English political Leveller before, during and after the English Civil Wars 1642–1650. He coined the term "freeborn rights", defining them as rights with which every human being is born, as opposed to rights bestowed by government or human law. In his early life he was a Puritan, though towards the end of his life he became a Quaker. His works have been cited in opinions by the United States Supreme Court.

Lilburne's writings were popular and circulated widely. He described the many injustices he had suffered at the hands of the authorities. The Lords, the Commons, the clergy, army officers, magistrates, gaolers—no-one was safe from his vitriol. He fearlessly drew attention to examples of hypocrisy, corruption and profiteering wherever he saw them. He soon alienated most of his powerful friends, including Cromwell, but Lilburne's imprisonment stirred a storm of political activity and protest in his defence. His central demand ... became a focal point in the formation of the Leveller movement.
John Lilburne, by John Simkin, Nov 2016
Spartacus Educational

While in Newgate Prison Lilburne used his time studying books on law and writing pamphlets. This included The Free Man's Freedom Vindicated (1647) where he argued that 'no man should be punished or persecuted... for preaching or publishing his opinion on religion'. He also outlined his political philosophy: 'All and every particular and individual man and woman, that ever breathed in the world, are by nature all equal and alike in their power, dignity, authority and majesty, none of them having (by nature) any authority, dominion or magisterial power one over or above another.'

John Lilburne (1615-1657) was a leader in the Leveller movement of the 1640s. A prolific pamphleteer, he was imprisoned several times for his religious views and became an ardent defender of religious liberty. He was active in the army of parliament and rose to the rank of Lieutenant-Colonel. His more important works include England's Birthright Justified (1645), England's New Chains Discovered (1649), The Hunting of the Foxes (1649).

17th-century pamphleteer, organizer, and dissident John Lilburne was an important early voice for liberty, especially in matters of criminal justice. ... In more than 80 pamphlets written during the mid-17th century, he attacked intolerance, taxes, censorship, trade restrictions and military conscription. He championed private property, free trade, freedom of association, freedom of religion, freedom of speech, freedom of the press, a rule of law, a separation of powers and a written constitution to limit government power. Lilburne helped bring these dynamic ideas together for the first time in human history.
Related Topics: Edward Coke, Republic of Ireland, Thomas Jefferson, Rule of Law, John Milton, Freedom of the Press, Right Against Self-Incrimination
The Bill of Rights, by Hugo Black, New York University Law Review, Apr 1960
Relates background stories that led to adoption of the Bill of Rights, including John Lilburne and religious persecution in colonial America

John Lilburne, a Puritan dissenter, ... found out the hard way that a citizen of England could not get a court and jury trial under English law if Parliament wanted to try and punish him in some kind of summary and unfair method of its own. ... His chief defense was that the Parliamentary conviction was a nullity ...
Related Topic: United States Bill of Rights
John Lilburne: The First English Libertarian, by Peter Richards, 29 Mar 2008
Detailed biographical essay of "Freeborn John" concluding with reasons to use the modern term "libertarian" for him

John Lilburne has the unusual distinction of being an Englishman who has been put on trial for his life twice and acquitted twice. During his lifetime he enjoyed huge popular support and in the mid-1600s was almost certainly the most popular man in the country ... Lilburne, in his own day, was described as a Leveller, a term he did not like. He usually preceded it with words like "falsely so called" or "commonly (though unjustly) styled" to make his point ... John Lilburne believed in liberty. Lilburne's life story is a testament to the fact that he not only believed in freedom, but also acted upon that belief.
Related Topics: Libertarianism, Freedom of the Press, Freedom of Religion, Right Against Self-Incrimination
Was Freeborn John Tortured in Vain?, by Wendy McElroy, 16 Aug 2011
Reviews the history of the right against self-incrimination in England and early America, then describes certain modern attempts to diminish its applicability

Famously, the Leveller and libertarian John Lilburne employed Foxe's procedures in 1637, when he was brought before the Court of Star Chamber for circulating Puritan books. Rather than being charged, Lilburne was asked how he pled. Refusing to take the customary oath, he declined to answer questions that constituted bearing witness against himself; instead he appealed to his 'freeborn right' to be justly tried. ... In 1641, when the much-hated Star Chamber was abolished and the right to remain silent established in religious courts, Lilburne was largely credited. He then proceeded to fight for procedural rights in common-law courts.
Related Topics: Due Process of Law, Right Against Self-Incrimination
Why Should a Supreme Court Justice Care about Natural Rights?, by Jim Powell, 9 Jul 2010
Discusses the evasiveness of Supreme Court nominee Elena Kagan when asked about the Declaration of Independence, and argues why justices should heed the natural rights philosophy embodied by its most famous lines

The English apprentice John Lilburne, writing during the mid-17th century English Revolution, was the first person to develop a recognizable natural rights philosophy. In some 80 pamphlets, he attacked intolerance, taxes, censorship, trade restrictions and military conscription. He championed private property, free trade, freedom of association, freedom of religion, freedom of speech, freedom of the press, a rule of law, a separation of powers and a written constitution to limit government power. These incendiary ideas crossed the Atlantic where they were taken up by Thomas Paine, Thomas Jefferson and others ...
Related Topics: United States Declaration of Independence, William Lloyd Garrison, Rights

An Agreement of the Free People of England: Tendered as a Peace-Offering to this distressed Nation, 1 May 1649

We the free People of England, ... Agree to ascertain our Government, to abolish all arbitrary Power, and to set bounds and limits both to our Supreme, and all Subordinate Authority ... we are agreed ... That the Supreme Authority ... shall be and reside henceforward in a Representative of the People consisting of four hundred persons, but no more ...
Related Topic: England

The introductory paragraph uses material from the Wikipedia article "John Lilburne" as of 3 Jul 2018, which is released under the Creative Commons Attribution-Share-Alike License 3.0.