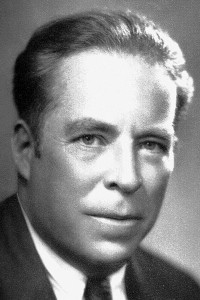 Morley was educated at Haverford College, Haverford, Pa., a Quaker institution, where his father was a professor. ... he went into reporting, working at the Baltimore Sun, where he became acquainted with H. L. Mencken, the paper's most famous writer. ... In 1933, Morley was asked to become editor of the Washington Post. He worked there until 1940, when he took up the presidency of his alma mater, Haverford College. He left the college in August 1945 to pursue his writing. ... In February 1944, Morley and Frank Hanighen launched a weekly newsletter, Human Events, to provide comment on the news.
Related Topics: Cold War, United States Constitution, Imperialism, War, World War I
Felix Morley: The Journalist Philosopher, by Oscar B. Johannsen, Fragments, 1985
Biographical essay based on Morley's autobiography For the Record, contrasting the Brontë sisters with the Morley brothers (Christopher, Felix and Frank) but focusing on Felix

Felix's reflective ability led to his becoming and remaining at heart a journalist, but one with a broad philosophical as well as a common sense outlook. He also devoted part of his life to being an educator. As editor of The Washington Post, he elevated it from a mere local city newspaper to one of national and international significance. Later, as president of Haverford, the nation's preeminent Quaker hall of learning, he enlarged its scope and guided it through World War II days, saving it from a demise threatened by the vicissitudes of the war.
Related Topics: Politics, The State, Technology
Felix Morley – Washington Post & his Career, by Leonard Liggio
Review of Morley's autobiographical For the Record (1979)

Felix Morley (1894-1982) a leading libertarian scholar, editor and a founding member of the Mont Pelerin Society was made editor of the Washington Post after it was acquired in 1933 by Eugene Meyer ... In the Spring of 1940 Morley was appointed the new president of Haverford College ... Felix Morley kept a diary all his life, so his memoirs are extremely detailed ... Morley ... notes that the Pennsylvania legislature rejected the 16th Amendment authorizing an Income Tax ... Morley was critical of the Wilson administration's wartime measures such as the Espionage and Sedition Act of 1917 ...
Related Topics: Mont Pelerin Society, Franklin D. Roosevelt, World War I, World War II

My diary records that I first met Chodorov on September 1, 1949, as I was leaving for Europe to do some broadcasting and, incidentally, to promote Human Events, of which I was then president and, in effect, editor. ... Anyway, the policy of Human Events had to be clarified. So, on February 14, 1950, I called a meeting of its stockholders to decide whether or not the editorial direction should be unified. ... I therefore resigned as president and surrendered my stock while agreeing to continue editorial supervision until June 1 to give Hanighen time to reorganize.
Related Topic: Frank Chodorov

Longines Chronoscope with Felix Morley, 30 Jan 1952
Morley, interviewed by William Bradford Huie and David Taylor March, is asked about the military draft and the influence of politics on colleges and universities

The introductory paragraph uses material from the Wikipedia article "Felix Morley" as of 5 May 2018, which is released under the Creative Commons Attribution-Share-Alike License 3.0.