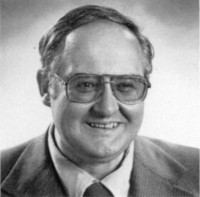 To ensure that the new freedom champions of today (and tomorrow) appreciate Leonard’s many contributions, Atlas Network established the Liggio Lecture Series as a central part of its annual Atlas Network's Liberty Forum & Freedom Dinner, one of the freedom movement's must-attend international events. ... This website, developed by Leonard's colleagues at Atlas Network, serves as an online portfolio of his work, and a location where well-wishers can post tributes to Leonard in the spirit of those collected 15 years ago in the collection, Born on the 5th of July ..., on the occasion of Leonard’s 65th birthday.

Leonard P. Liggio - Online Library of Liberty
Includes short profile and links to an interview and to issues of Literature of Liberty which Liggio edited from 1978 to 1982

Leonard Liggio is a professor of history and law at George Mason Uiversity, Fairfax, Virginia. The journal Literature of Liberty was edited by Leonard P. Liggio and John V. Cody between 1978 and 1982.

Farewell to Our Friend, Leonard Liggio, by Lawson Bader, 14 Oct 2014
Memorial essay by then CEI president, with additional comments from Fred Smith, CEI founder and chairman

Leonard knew just about everything about classical liberalism—and just about everyone who helped build the movement. That is true. It is also true there are many more yet to come who will be worth knowing, and there will always be more to discover about the power of classical liberalism. But they, alas, will only read him, and of him. To know Leonard was to absorb the richness of his ideas and breadth of his insights. It was also a pleasure. Classical liberals are often typecast as a cantankerous lot. Leonard was certainly not. He was friends with all. Such is the power of legacy as generations move on.
In Memoriam: Leonard Liggio, 14 Oct 2014
Extensive biographical essay covering Liggio's activities in various institutions, awards and the Liggio Legacy Program

Leonard's lifelong work for liberty won him acclaim among diverse audiences. In 2007, he was recognized with the Adam Smith Award ... In 2011, he received a Lifetime Achievement Award from the Society for the Development of Austrian Economics. That same year, the then-nascent organization Students for Liberty published an interview with Leonard that called him "The Original Student for Liberty." ... Perhaps the most thorough overview of his life is provided in "A Conversation with Leonard Liggio," led by John Blundell, as part of Liberty Fund's Intellectual Portraits video series ...
Related Topics: Atlas Network, Institute for Humane Studies, Murray N. Rothbard
Leonard Liggio, R.I.P., by Brian Doherty, 14 Oct 2014
Memorial essay reviewing Liggio's work in the libertarian movement

Liggio was quite literally one of the first mere handfuls of youngsters that arose in the 1950s to advocate and spread modern American libertarian ideas ... As part of his personal libertarian education, Liggio attended Ludwig von Mises's New York University seminars and was briefly part of Ayn Rand's circle. ... Liggio served during his over six decades of libertarian scholarship and educational activism as president of the Mont Pelerin Society, the Philadelphia Society, and the Institute for Humane Studies, and more recently executive vice president of academics at the Atlas Economic Research Foundation.
Related Topic: Murray N. Rothbard
Leonard P. Liggio (1933–2014), by Sheldon Richman, The Goal Is Freedom, 17 Oct 2014
A memorial tribute to Richman's "favorite teacher"

Leonard was not my teacher in the formal sense. I never got to take any of his classes. But like many libertarians of my generation and beyond, I learned so much from him through occasional lectures and especially conversations ... Leonard had the remarkable ability to find common ground with diverse people. He was a radical libertarian devoted to individualism, free markets, and peace. He was a sworn enemy of tyranny, imperialism, and war ... The key to his success was his ability to show the connections among the mercantilism, imperialism, regulation of business, welfarism, and government spending, inflation, and debt.
Related Topics: Circle Bastiat, Cato Institute, Institute for Humane Studies, Imperialism, Libertarianism, Murray N. Rothbard, Benjamin Tucker, Vietnam War
The Movement Grows, by Murray N. Rothbard, The Libertarian, 1 Jun 1969
Recounts the first three meetings of the Libertarian Forum, the student libertarian organizations at Fordham, Wesleyan, SUNY Buffalo and Stanford, and the formation of the Radical Libertarian Alliance

Speaking of repression, a little whiff of it was felt at the third meeting of the Libertarian Forum at the Jager House in New York, when the libertarian scholar and activist Leonard P. Liggio spoke on the libertarian nature of the New Left. Less than [24] hours after the end of this harmless meeting, we heard from unimpeachable sources of ... the report in sextuplicate of a cop spy at the meeting ... And yet, countless libertarian-conservatives still revere and identify with the polizei! It seems that there were SDS members—horrors!—at the Forum meeting, and that many SDS people are tailed wherever they go ...
Related Topics: Roy Childs, Karl Hess, Libertarianism, New York, Nonviolent resistance, Radical Libertarian Alliance
Non-Marxist Theories of Imperialism, by Alan Fairgate, Reason, Feb 1976
Examines writings of critics of imperialism that are not based on Marxist analysis

Editorial: Turgot and the Battle Against Physiocracy, Literature of Liberty, 1979
Editorial essay for volume II, number 1; discusses those who influenced Turgot and those influenced by him

The continuing significance of Anne Robert Jacques Turgot (1727–1781) is both as a founder of modern economic science and as a powerful shaper of the Enlightenment idea of progress. The youthful Turgot was deeply moved by the liberal temper of Montesquieu's L'Esprit des Lois (1748). Turgot, however, found Montesquieu's determinism uncongenial; he was deeply impressed by the role of the human mind in molding history. ... Turgot's greatest impact, arguably, was being the teacher of Marie Jean Antoine Nicolas Caritat de Condorcet (1743–1794). Especially after the fall of Turgot, Condorcet became the hope of the liberal cause.
Related Topics: Eugen von Böhm-Bawerk, Richard Cantillon, Thomas Jefferson, Jean-Baptiste Say, Anne Robert Jacques Turgot
Felix Morley – Washington Post & his Career
Review of Morley's autobiographical For the Record (1979)

Felix Morley (1894-1982) a leading libertarian scholar, editor and a founding member of the Mont Pelerin Society was made editor of the Washington Post after it was acquired in 1933 by Eugene Meyer (1975-1959) in a bankruptcy auction. Meyer's grandfather had been the Grand Rabbi of France ... Morley annually lectured in the William Volker Fund summer seminars which usually featured three faculty ... In the early 1980s Ken Templeton arranged two Liberty Fund colloquia at Gibson Island on freedom of the press and on civil liberties. Morley died on March 13, 1982 immediately previous to the last one.
Related Topics: Mont Pelerin Society, Felix Morley, Franklin D. Roosevelt, World War I, World War II
The State of the Movement [PDF], The Libertarian Forum, 15 May 1970
Examines the history and status of the (New Left) Movement, in particular of the Students for a Democratic Society and the involvement of libertarians and socialists in SDS

The Movement has been facing the disintegration of the primary centers of the New Left, especially SDS, with confusion and dismay. What is really necessary is rational, cool-headed and realistic analysis. First, the general reaction of confusion and dismay reflects both emotionalism and conservatism (the same thing ultimately) ... It is the attitudes of the 'forerunners' that will become dominant in America; "this particular young generation is by all odds the most interesting to come along in all of U. S. history," Fortune editorialized, "it will shortly preside over the revolutionary changes that await us."
Related Topics: Imperialism, Libertarianism, Vietnam War

Video in honor of Leonard Liggio, 23 Dec 2009
Collection of short video statements honoring Liggio on occasion of the 20th anniversary of the Institute for Economic Studies Europe

The introductory paragraph uses material from the Wikipedia article "Leonard Liggio" as of 15 Mar 2018, which is released under the Creative Commons Attribution-Share-Alike License 3.0.