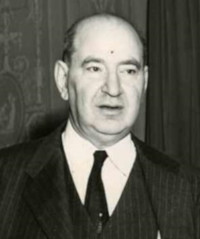 Frank Chodorov (15 February 1887 – 28 December 1966) was an American member of the Old Right, a group of libertarian thinkers who were non-interventionist in foreign policy and opposed to both the American entry into World War II and the New Deal. He was called by Ralph Raico "the last of the Old Right greats".

Frank Chodorov, author and editor, was a lifelong individualist. Chodorov did not gain a position of prominence in the classical liberal movement until 1937, when he was appointed director of the Henry George School of Social Science at the age of 50. ... In 1944, Chodorov began publishing a four-page broadsheet called analysis, in which in nearly every issue he was the sole writer. ... Chodorov and Buckley founded the Intercollegiate Society of Individualists (ISI), whose goal was to influence college students through a comprehensive series of publications, speaking engagements, and discussion clubs.
Related Topic: analysis

Frank Chodorov - Online Library of Liberty
Includes picture, short biography and links to his Fugitive Essays and to selected quotations

Chodorov was an advocate of the free market, individualism, and peace. He began as a supporter of Henry George and edited the Georgeist paper The Freeman before founding his own journal which became the influential Human Events. He later founded another version of The Freeman for the Foundation for Economic Education and lectured at the Freedom School in Colorado.

Frank Chodorov, a friend during Nock's last decade, said, "It was only after I was appointed administrator of his estate that I learned of the existence of two full-grown and well-educated sons." ... There was yet another revival of The Freeman in 1937. The creative spark was Frank Chodorov, who had met Nock the year before at the Players Club. The eleventh son of Russian immigrants, Chodorov had become director of the recently chartered Henry George School, and The Freeman served as its flagship publication. It was an 18- to 24-page monthly that defended capitalism and opposed American entry in the coming European war.
Related Topics: Economic Freedom, Compulsory Education, The Freeman, The Freeman, Henry George, Germany, Thomas Jefferson, Learning, H. L. Mencken, Albert Jay Nock, Franz Oppenheimer, Franklin D. Roosevelt, The State, Woodrow Wilson, World War I
Frank Chodorov: A Libertarian's Libertarian, by Joseph R. Stromberg, 30 Nov 1999
Biographical essay on Frank Chodorov with emphasis on his foreign policy views, and his debates about the Cold War with William F. Buckley Jr. and William S. Schlamm in the pages of The Freeman

Frank Chodorov (1887-1966) could well be called a libertarian's libertarian. ... Along with that whole generation of libertarians, republicans, and conservatives we call the Old Right, Chodorov was strongly committed to nonintervention. ... Chodorov had opposed US entry into World War II. ... In the August 1954 Freeman there was something of a debate between young William F. Buckley, Jr., paladin of the interventionist new right, and Chodorov. ... In 1962, Chodorov summed up his foreign policy ideas in his autobiography. 'Isolationism,' he wrote, 'is not a political policy, it is a natural attitude of a people.'
Related Topics: analysis, Cold War, Communism, Europe, The Freeman, Henry George, Imperialism
Frank Chodorov: Champion of Liberty, by Aaron Steelman, The Freeman, Dec 1996
Biographical essay on the 30th anniversary of Chodorov's death

By the early 1950s, Chodorov was already well established as an individualist writer of the highest quality. In his view, the movement he had helped to preserve and shape in the 1940s was not 'conservative'; it was 'individualist.' He was disturbed by the growing influence of a system of thought he viewed as fundamentally majoritarian in nature.
Frank Chodorov, R.I.P., by Murray Rothbard, Left and Right, 1967
Biographical remembrance of Chodorov relating Rothbard's first meeting him

For Frank was sui generis, and the vast gulf in the quality of mind and the rigor of ideas between him and the other 'rightist' intellectuals was, in a sense, embodied in that other gulf of spirit and outward form. Unflinching honesty, courage, love of the intellect and the products of the mind, these are some of the things that distinguished Frank Chodorov to the very core of his being and set him many light years above his confreres.
Honoring a Prophet, by Felix Morley, Reason, Jul 1981
Review of Fugitive Essays: Selected Writings of Frank Chodorov

Frank Chodorov (1887-1966) was of that type of journalist who will never subordinate talent to ordinary reporting. Like Henry L. Mencken in this respect, he took from the stream of circumstance only what interested him, commenting thereon without fear or favor. ... Chodorov was the better historian and philosopher but published for the most part in offbeat media with little circulation. ... My diary records that I first met Chodorov on September 1, 1949 ... I had closely studied Chodorov's well-named personal broadsheet, analysis, and concluded that it would be advantageous to both if the two small publications were merged.
How to Become a Teacher [PDF], by Robert LeFevre, The Voluntaryist, Feb 1983
Autobiographical summary of the events in LeFevre's life that led to the founding of the Freedom School, including LeFevre's relationship with Baldy Harper and the offer for him to lead the School

Read had assembled some of the finest brains in the country. Among the intellectuals gathered there at one time or another were such persons as Ludwig von Mises, ... Frank Chodorov ... Whereas, conservatives generally had been trying to remove communists from government positions, a deeper study of the issues involved put the problem in another light. No one ever stated it better than Frank Chodorov who said: "You can't get communists out of government; it's their native soil. That's where they grow."
Related Topics: Colorado, Communism, Foundation for Economic Education, Government, F. A. Harper, Learning, Los Angeles, Leonard Read, Socialism, Rose Wilder Lane, World War II
The Singular Henry George: Insights and Influence, by David S. D'Amato, 22 Oct 2014
Discusses George's early life, the main arguments made in his writings and the influence and disagreements he had with contemporary and later radicals

In 'The Single Taxer,' libertarian essayist Frank Chodorov recounts his introduction to the thought of Henry George ... To Chodorov, George's system of political economy depends on 'an abiding faith in the essential goodness of man,' assuming that under a healthier, more prosperous and productive economy, 'political offices would go begging.' Chodorov doubted both that the politically ambitious would abandon the pursuit of power so readily ... For Chodorov, even a single tax on land was one tax too many, presented ultimately as an opportunity for politicians to abuse their power and harm freedom.
Related Topics: Free Trade, Henry George, Thomas Hodgskin, Land, Benjamin Tucker

Imperium in Imperio, analysis, Jun 1950
Examines the theory of government espoused by James Madison, how property rights have regressed since then, and arguing that a States' Rights movement (meaning decentralization and local autonomy) should be focused on protecting property rights

The Constitution that came out of the Philadelphia convention in 1787 was not acclaimed a "divine document." On the contrary, the folks were rather skeptical about it and made ratification difficult. Yet there was no organized opposition. The Constitution simply ran head on into the individualism ... the Founding Fathers ... favored a federal government because they saw in it a protection for private property; now that the federal government has become an instrument of spoliation, would not the Founding Fathers join up with a States' Rights movement so dedicated? Even Hamilton should be a States' Righter these days.
Related Topics: American Revolutionary War, United States Constitution, Founding Fathers, Government, James Madison, Massachusetts, Politics, Private Property, Taxation
The Income Tax: Root of All Evil, The Income Tax: Root Of All Evil, 1954
Excerpt from Chodorov's book with the same title; discusses the effects of the 16th amendment to the U.S. Constitution

The [Sixteenth Amendment] puts no limit on governmental confiscation. ... Whichever way you turn this amendment, you come up with the fact that it gives the government a prior lien on all the property produced by its subjects. In short, when this amendment became part of the Constitution, in 1913, the absolute right of property in the United States was violated. That, of course, is the essence of socialism. Whatever else socialism is, or is claimed to be, its first tenet is the denial of private property. All brands of socialism, and there are many, are agreed that property rights must be vested in the political establishment.
Related Topics: Property Rights, Socialism, Taxation, Voting
Taxation Is Robbery, Out of Step, 1962
Chapter XXII; starting with the historical origins of taxation, proceeds to examine its indirect and direct forms and the rationales behind it

By way of preface, we might look to the origin of taxation, on the theory that beginnings shape ends, and there we find a mess of iniquity. A historical study of taxation leads inevitably to loot, tribute, ransom: the economic purposes of conquest. The barons who put up toll-gates along the Rhine were tax-gatherers. So were the gangs who 'pro­tected,' for a forced fee, the caravans going to market.
Related Topics: Corporatism, Politics, Social Security Tax, The State, Taxation

Out of Step: The Autobiography of an Individualist, 1962
Partial contents: The Ethics of the Peddler Class - On Underwriting an Evil - The Single Taxer - Henry George and the Classicists - About Socialism and Socialists - Isolationism - Albert Jay Nock - Henry David Thoreau - Taxation is Robbery

The introductory paragraph uses material from the Wikipedia article "Frank Chodorov" as of 4 Nov 2018, which is released under the Creative Commons Attribution-Share-Alike License 3.0.