Founder with George Soros of the Quantum Fund 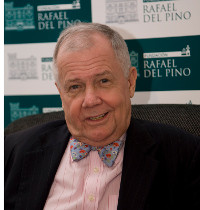 James Beeland Rogers Jr. (born 19 October 1942) is an American businessman, investor, traveler, financial commentator and author based in Singapore. Rogers is the Chairman of Rogers Holdings and Beeland Interests, Inc. He was the co-founder of the Quantum Fund and creator of the Rogers International Commodities Index (RICI).

Jim Rogers - The Millennium Adventure
Personal website, covering Rogers' 1999-2002 "ultimate road trip"; includes details of the adventure, information about his books, articles from 1999 to 2003 and videos

"We arrived back in New York, our starting point, on 5 January 2002, just 1101 days since we departed on our round-the-world, Guinness World Record journey. ... Passing through 116 countries, we covered more than 245,000 kilometers during our travels, which began in Iceland way back on 1-1-1999. Our non-stop, self-contained, three-year trip in a one-of-a-kind Mercedes-Benz took us to six continents, where our goal was to explore as much of the world as possible at the turn of the millennium, to learn what people and countries were doing and to see how well they were doing it."

"According to some reports, the #1 travel fantasy is a trip around the world. Libertarian investor Jim Rogers lived that dream in 1999 when he embarked on a 116-country journey that he later wrote about ... Rogers first became famous in 1973, when he co-founded with George Soros the Quantum Fund, a global-investment partnership. After the fund increased in value by 4,000 percent in a decade, Rogers retired as a millionaire at age 37. Proving that his first fund was no fluke, in 1998 Rogers started the Rogers International Commodities Index, which increased in value by 76 percent over the next five years."

"LINDSAY WILLIAMS: This is a quote from you: 'The excesses in the financial markets are what you should always sell short'. What do you mean?
JIM ROGERS: Well, when you see a lot of people are making a lot of money, or investing a whole lot in a certain field - you know that’s not the bottom when that’s the case. When taxi drivers are talking about something you probably should be saying: 'Hey, wait a minute, if everybody is invested in this, I should go the other way!' Right now, for instance, in the financial community, people are making huge amounts of money. ... That’s not the sign of a bottom."
Related Topics: Botswana, South Africa, Politics

Jim Rogers: Fannie and Freddie ... let the patient pass away, Worldwide Exchange, 15 Jul 2008
Interview about the Fannie Mae and Freddie Mac bailout and the outlook for commodity prices

The introductory paragraph uses material from the Wikipedia article "Jim Rogers" as of 11 May 2018, which is released under the Creative Commons Attribution-Share-Alike License 3.0.