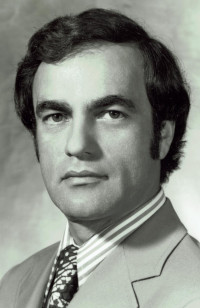 Earl Cedric Ravenal (born 1931) is an American foreign policy analyst, academic and writer. He is a former distinguished senior fellow in foreign policy studies at the Cato Institute and professor emeritus of the Georgetown University School of Foreign Service.

Cato Institute
Includes profile and links to his writings

Earl C. Ravenal, former distinguished senior fellow in foreign policy studies, is professor emeritus of the Georgetown University School of Foreign Service. He is an expert on NATO, defense strategy, and the defense budget. He is the author of Designing Defense for a New World Order.

The first [talk] was given ... by foreign policy expert and advocate of reduced military commitments, Dr. Earl C. Ravenal. A former Defense Department analyst, Dr. Ravenal is currently professor of American Foreign Policy at the Johns Hopkins School of Advanced International Studies, a fellow of the Institute for Policy Studies, and a recently-elected member of the Board of Directors of the CATO Institute ... Ravenal spoke on "Carter’s Foreign Policy," and examined certain aspects of the relationship between foreign policy and domestic policy, particularly the relationship between liberty and "national security."
Related Topics: Nathaniel Branden, John Hospers, Libertarian Party, Roger MacBride, Murray N. Rothbard
Murray, the LP, and Me, by David Bergland, 25 Dec 2002
Lengthy autobiographical essay, focusing on Rothbard, libertarianism and the LP; reprinted in Walter Block's I Chose Liberty (2010)

The nominating convention ... in 1983 ... was the last hurrah of the Cato group (Murray's Craniacs) in the LP. Their candidate, Georgetown professor Earl Ravenal, was viewed as a moderate with good inside the Beltway connections ... One significant factor in the outcome was Murray's research on Ravenal (who truly was a gentleman and a scholar) which disclosed his membership in the Council on Foreign Relations, among other things. Ravenal's history did not sit well with many of our more right-wing conspiracy theorist delegates. (Yeah, the LP has some of those.) After Ravenal lost the nomination, the Craniacs left in a huff.
Related Topics: Barbara Branden, Nathaniel Branden, Cato Institute, Ed Crane, For a New Liberty, Human Action, Libertarianism, Libertarian Party, Roger MacBride, Objectivism, Murray N. Rothbard
This Is The Movement You Have Chosen, by Murray N. Rothbard, The Libertarian Forum, Apr 1984
Reports on media coverage of the 1983 Libertarian Party presidential convention and comments on goings-on in the Crane Machine (CM), i.e., Ed Crane and Cato Institute

But perhaps the most illuminating ... came from Earl Ravenal himself. Interviewed by his hometown newspaper, the Easton (Md.) Star-Democrat ... Ravenal held forth at some length in decidedly ungracious fashion ... Earl the Pearl denounced the rest of us as fighting to maintain the LP "like a tightly cloistered church", "just guarding the flame of dogma." ... And if principle equals "dogma", what does that make the person who bitterly denounces "dogma"? The answer is "unprincipled, opportunist—not a libertarian—" in short, all the things many of us were worried that Earl Ravenal really was down deep.
Related Topics: David Bergland, Roy Childs, John Hospers
Total Victory: How Sweet It Is!, by Murray N. Rothbard, The Libertarian Forum, 1983
Lengthy account and commentary on the 1983 Libertarian Party presidential convention

Earl Ravenal, professor of international relations at Georgetown University, entered shortly after Bergland as the Crane Machine candidate ... Bill Evers and I were two of the very few who knew Ravenal, from our days at the Cato Institute, where he has served for many years as a Board member ... That first instinctive reaction of each of us was: "But he's not a libertarian!" A libsymp (libertarian sympathizer) for sure ... But a hardcore principled libertarian? Certainly not ... in several Cato summer seminars in recent years, Ravenal had told the participants that he was not a Libertarian, but a sympathizer.
Related Topics: David Bergland, Roy Childs, Robert A. Heinlein, Libertarian Party, Roger MacBride, Tonie Nathan, David Nolan, Ron Paul, Robert W. Poole, Jr., Justin Raimondo, Mary Ruwart

The Case for Strategic Disengagement, Foreign Affairs, Apr 1973
Proposes strategic disengagement as an alternative to the U.S. foreign policy of "balance of power" system, defending it as not being "appeasement" or the "old isolationism"; also found in The Libertarian Reader (1997)

Characteristic of American foreign policy since World War II has been the quest for a certain minimum of world order and a practical maximum of American control. Successive schemes for the regulation of power-collective security, bipolar confrontation, and now perhaps the balance of power-have differed in their objects and style. But interventionism—structuring the external political-military environment and determining the behavior of other nations, whether in collaboration, conflict or contention with them—has been the main underlying dimension of our policy.

Designing Defense for a New World Order: The Military Budget in 1992 and Beyond, Sep 1991
Partial contents: The Bush 1992 Defense Program: Two Times Three-Quarter Wars - Geopolitical Lessons from the Persian Gulf - Implications For Security - The So-What Factor - Principles for National Security - Epilogue: A Nation among Nations

The introductory paragraph uses material from the Wikipedia article "Earl Ravenal" as of 14 Dec 2017, which is released under the Creative Commons Attribution-Share-Alike License 3.0.