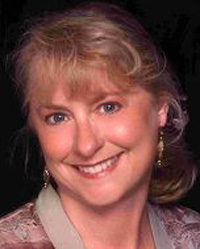 Mary J. Ruwart (born 16 October 1949) is a retired biomedical researcher and libertarian speaker, writer and activist. She was a leading candidate for the 2008 Libertarian Party presidential nomination and is the author of the award-winning Healing Our World.

Advocates for Self-Government, Board of Advisors
Liberty International, Chair of the Board of Directors
Eris Society, 1994, "Eris Island Revisited: What Would a Free Society Be Like?"

The Advocates for Self-Government Dr. Mary Ruwart
Includes photo, biographical profile, quotes from Ruwart and from reviews of Healing Our World

Dr. Mary J. Ruwart is the author of the acclaimed libertarian book Healing Our World, a widely-praised guide to libertarian ideas. Its unique fusion of spiritual concerns with hardcore libertarian ideas has won it rave reviews. ... Dr. Ruwart became interested in libertarian ideas as a young child. 'I watched Johnny Tremain,' she said, remembering the 1957 Disney film about a young American Revolution hero. ... As a college student she read Ayn Rand’s Atlas Shrugged, which had a profound effect upon her. In the late 1970′s she joined the Libertarian Party. ... Dr. Ruwart was a senior scientist at Upjohn Pharmaceuticals for 19 years.
Related Topic: Liberty International

"Ask Dr. Ruwart": Short Answers to Tough Libertarian Questions
Over 40 topic categories, up to circa 2009
Libertarianism: Short answers to tough questions
From 2010 to 2014; topics broken down into for major areas: economic liberty, personal liberty, libertarianism and foreign policy

Charles Johnson on his Many Publications, Libertarian Feminism and Anarchic Individualism, by Charles W. Johnson, Anthony Wile, The Daily Bell, 29 Apr 2012
Topics include the Markets Not Capitalism anthology, some of his essays, his family, his work with Alliance of the Libertarian Left, war, constitutions, feminism, unions, the United States, Murray Rothbard, Austrian economics and the future

Mary Ruwart's Healing Our World is a good general introduction to libertarianism, and in particular to forms of libertarianism that are closely connected with ecological and social justice concerns. (There's a short excerpt from one of Ruwart's chapters on free-market environmentalism in Markets Not Capitalism, but we hardly had the space there to do justice to the scope of her work.)
Related Topics: Voltairine de Cleyre, War
Total Victory: How Sweet It Is!, by Murray N. Rothbard, The Libertarian Forum, 1983
Lengthy account and commentary on the 1983 Libertarian Party presidential convention

In mid-week, a complete unknown threw her hat into the ring: Mary Ruwart of Michigan, who announced that "you should vote for me because I am a woman." ... I dismissed her candidacy ... I was dead wrong. By Friday night, I learned to my astonishment that Mary Ruwart ... was very effective in the candidates' debates in the regional delegates caucuses. In a small, living room situation, she was poised and articulate ... The cry, "Mary, Mary" would redound throughout the hall on Saturday ... on the first ballot, Mary got 77 votes, 15% of the total, and on the second ballot her vote rose to 99.
Related Topics: David Bergland, Roy Childs, Robert A. Heinlein, Libertarian Party, Roger MacBride, Tonie Nathan, David Nolan, Ron Paul, Robert W. Poole, Jr., Justin Raimondo, Earl Ravenal

How I Became a Libertarian, 14 Dec 2002
Dr. Ruwart recounts some key moments in her path to libertarianism and anarchism, from Swamp Fox to Atlas Shrugged to Morris and Linda Tannehill; reprinted in Walter Block's I Chose Liberty (2010)

My journey to liberty began at the tender age of seven, when I fell madly in love with Walt Disney’s rendition of General Francis Marion. This legendary Southern freedom fighter harassed the British during the Revolutionary War and became known as the elusive Swamp Fox. My infatuation was not simply with the hero ... For me, libertarianism continues to be an evolution. As I detail in Healing Our World, all paths, whether spiritual, practical, rational, or humanitarian, appear to lead to liberty, where these separate modalities become intertwined. Perhaps we truly are hard-wired for freedom so that nothing less will do.
Related Topics: American Revolutionary War, Anarchism, Libertarianism
The Indivisibility of Liberty, 23 Apr 2008
Discusses how advocating that others be deprived of some liberties results in negative repercussions on our own liberties

Ask Americans what made our country great and they will say, without hesitation, that liberty is our touchstone. Yet ask Americans what their government should do for them and the answer can be boiled down simply to this: "Control, tax, and regulate my neighbors." Americans want liberty for themselves, but they want something very different for others ... Liberty is indivisible. It's the one thing we can't have unless we are willing to give it others. If someone tells you differently, they just don't know how the world really works. Make sure that you don't vote them into power. The liberty you save may be your own!
Related Topics: War on Drugs, Libertarianism, Liberty

The introductory paragraph uses material from the Wikipedia article "Mary Ruwart" as of 31 May 2018, which is released under the Creative Commons Attribution-Share-Alike License 3.0.