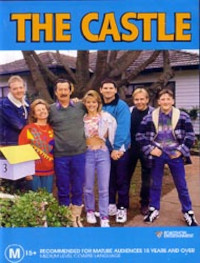 When an airport attempts to 'compulsorily acquire' a home in its vicinity through the use of eminent domain, the homeowner it intends to evict fights back. ... 'The Castle reminds us of the value of small gestures, assuming the best in people, picking your fights and being fiercely loyal to those you love. When offered a tidy packet to sell his home, Darryl responds with a line that distills the film's emotional essence: "You can’t buy what I’ve got."' –The Guardian
Related Topics: Amazing Grace, Fahrenheit 451, Films, Mr. Smith Goes to Washington, South Park: Bigger, Longer & Uncut, Tucker: The Man and His Dream
Liberty at the Movies, by David Boaz, 20 Jun 2005
Short reviews of some of Boaz' "all-time favorite libertarian movies" from "Hollywood"

The Castle was produced in Australia in 1997 but reached the United States in 1999. It's a very funny film about a character who thinks that living near the airport is just great. He even likes looking up at the massive power lines near his house because they remind him of what man can accomplish. Shades of Ayn Rand! Anyway, a man's home is his castle, and the protagonist is shocked when the airport decides to seize his property to extend its runway. He fights the system to no avail until a smooth, well‐​dressed lawyer — way out of the lead character's league — shows up and offers to take his case.
Related Topics: Amistad, Films, Shenandoah

... when the Kerrigan family receives a letter stating that their home will be 'compulsorily acquired', the optimistic father of the family, Darryl, decides to fight back. ... Further investigation reveals that the eviction comes from wealthy businessmen in cahoots with the government, 'It's a way of privatizing without privatizing'. ... The movie cleverly weaves in the point that interpersonal utility comparisons are invalid ...
The Castle (1997)
by Jon Osborne, Miss Liberty's Guide to Film and Video, 2001

It's just a run-down house on to which the homeowner himself has built some amateur extensions. It has a fake chimney, an oversized doghouse, and inelegant decorations. But that's the point. This is the worst-case scenario. It's not the objective market value of a home that determines either its value to the owner or his legal right to own it. To this homeowner, this home happens to be of enormous value, partly because he's tailored it to his particular tastes and partly because it's full of happy family memories.
A Man's Home Is His Castle, by Wendy McElroy, Freedom Daily, Jul 2006
A review of the movie The Castle (1997) and its main theme: eminent domain

The Castle taps into the sadness, fear, and outrage that the average person feels when confronted by big government and big business. It also resonates with a theme that is strong in the American character: resistance to unjust authority. ... The Castle was a smash hit and an award winner in Australia. ... it leans heavily on a much-repeated joke: the unsophisticated Kerrigans with their unlikely dignity. ... This movie is a comedic treasure. It is a loving homage to the common man who loves his family and his castle, and will fight anyone who threatens either.
Related Topics: Australia, Eminent Domain Protections

The introductory paragraph uses material from the Wikipedia article "The Castle (1997 Australian film)" as of 1 Oct 2018, which is released under the Creative Commons Attribution-Share-Alike License 3.0.