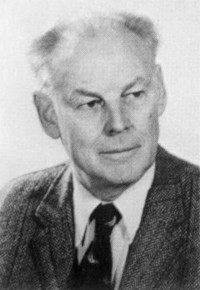 John Rensselaer Chamberlain (28 October 1903 – 9 April 1995) was an American journalist, business and economic historian, syndicated columnist and literary critic. He was dubbed "one of America’s most trusted book reviewers" by the libertarian magazine The Freeman.

John Chamberlain, a prominent liberal journalist in the 1930s, recalled the impact those books had on him and other readers at the time: "If it had been left to pusillanimous males probably nothing much would have happened. ... Indeed, it was three women — Paterson, Rose Wilder Lane, and Ayn Rand — who, with scornful side glances at the male business community, had decided to rekindle a faith in an older American philosophy. There wasn't an economist among them. And none of them was a Ph.D."
Related Topics: Roger MacBride, Rose Wilder Lane
Memoirs of a Simple Honorable Man, by Charles H. Hamilton, The Freeman, Nov 1992
Biographical and bibliographical essay, discussing some of the book reviews made in 1950-54 republished in The Turnabout Years (1991)

John Chamberlain has read a remarkable number of books in 89 years; one suspects he was born reading a book ... By one count he has published over 20,000 essays and reviews. ... John had a widely featured three-times-a week syndicated column from 1960 until 1990. Prior to that he had been an editorial page writer for The Wall Street Journal from 1950 to 1960. He had a long association with Life, first in Washington from 1941 to 1945, then as an editor from 1945 to 1950, and later as their chief editorial writer in the late 1950s. He had earlier been an editor at Fortune ... from 1936 until 1941.
Related Topics: The Freeman, Politics
A Reviewer Remembered: John Chamberlain 1903-1995, by Edmund A. Opitz, The Freeman, Jun 1995
Memorial and biographical essay

John's first book was a history of the Progressive Era in the United States–roughly the four decades from 1880 to 1920. In 1912 Teddy Roosevelt ran for President on the Progressive Party ticket. John's book entitled Farewell to Reform (1932) was based on extensive research, a critical use of original sources, and mature literary skill. This book was republished in 1958 and stands today as one of the essential books for understanding those critical years. For several years during the 1930s John wrote the daily book review for The New York Times. There was rarely a time during this period, he has told us, when he did not have a book in his pocket.
Related Topics: Capitalism, The Freeman, Albert Jay Nock
Rose Wilder Lane, Isabel Paterson, and Ayn Rand: Three Women Who Inspired the Modern Libertarian Movement, by Jim Powell, The Freeman, May 1996
Triple biographical essay on the women who in 1943 published The Discovery of Freedom, The God of the Machine and The Fountainhead

These women who had such humble beginnings—Rose Wilder Lane, Isabel Paterson, and Ayn Rand—published major books during the same year, 1943 ... The women, recalled journalist John Chamberlain, 'with scornful side glances at the male business community, had decided to rekindle a faith in an older American philosophy. There wasn't an economist among them. And none of them was a Ph.D.' ... after Leonard Read founded the Foundation for Economic Education, [Paterson] introduced him to influential journalist John Chamberlain, whom she had helped convert into a libertarian, and a decades-long collaboration blossomed.
Related Topics: Nathaniel Branden, Communism, Entrepreneurship, Europe, Liberty, Roger MacBride, Albert Jay Nock, Isabel Paterson, Ayn Rand, Leonard Read, Rose Wilder Lane

The introductory paragraph uses material from the Wikipedia article "John Chamberlain (journalist)" as of 24 Apr 2017, which is released under the Creative Commons Attribution-Share-Alike License 3.0.