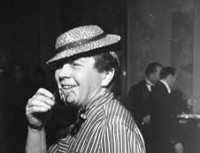 Isabel Paterson (22 January 1886 – 10 January 1961) was a Canadian-American journalist, novelist, political philosopher and a leading literary and cultural critic of her day. Historian Jim Powell has called Paterson one of the three founding mothers of American libertarianism, along with Rose Wilder Lane and Ayn Rand, who both acknowledged an intellectual debt to Paterson. Paterson's best-known work, her 1943 book The God of the Machine, a treatise on political philosophy, economics and history, reached conclusions and espoused beliefs that many libertarians credit as a foundation of their philosophy. Her biographer Stephen D. Cox (2004) believes Paterson was the "earliest progenitor of libertarianism as we know it today". In a letter of 1943, Ayn Rand wrote that The God of the Machine is a document that could literally save the world ... The God of the Machine does for capitalism what Das Kapital does for the Reds and what the Bible did for Christianity".

Isabel Paterson was an early and consistent exponent of the ideas that now define radical libertarianism. She advocated minimal government, laissez-faire capitalism, and absolute individual rights in both the social and economic spheres. ... In The God of the Machine, she advanced an original historical theory that focused on the generation and organization of energy. She described the individual, creative mind as a 'dynamo' and commerce as the means by which 'circuits' are formed for the application of energy across time and space.
Related Topic: Free Market

Altruism? Bah, Humbug, by Radley Balko, 22 Dec 2004
Contrasts the story of Aaron Feuerstein and Malden Mills with that of Jack Welch and General Electric to argue against activists that believe that corporations that put "altruism" before profits lead to better, more moral results

The implication is that there is something cold and inhumane about the raw and rugged free market — that the profit motive alone isn’t sufficiently altruistic to turn loose on polite society. Nothing could be further from the truth. The mid-20th century American writer Isabel Paterson put it best in her book The God of the Machine when she wrote, 'Most of the harm in the world is done by good people, and not by accident, lapse, or omission ... Innumerable speculative thinkers, inventors, and organizers, have contributed to the comfort, health, and happiness of their fellow men — because that was not their intention.'
Related Topics: Capitalism, Entrepreneurship
Finding Atlas: Before Ayn Rand there was Isabel Paterson, by Stephen Cox, The American Conservative, 4 May 2009
Biographical account highlighting Paterson's influence on Ayn Rand

Paterson (1886-1961) was a novelist and literary critic. ... Stubborn and sharp-witted, she was also one of the New Deal's fiercest foes. ... She had only two years of formal schooling. But she learned from her own experience, as well as her encyclopedic knowledge of history, that economic success results from individual initiative, not federal management.
Related Topic: Ayn Rand
Here are 7 lesser-known classical liberal thinkers for your World Philosophy Day, by Kelly Wright, 17 Nov 2016
Brief profiles of Spencer, Tucker, Spooner, Paterson, Molinari, Garrison and Herbert, together with a reading recommendation for each one of them

Isabel Paterson was a journalist, novelist, literary critic, and political philosopher. Canadian born, Paterson became an American citizen later in her life. She got her professional start as an editor for a Washington-based paper but would go on to write a regular column for the New York Herald Tribune where she wrote on a variety of topics, including the Harlem Renaissance, the New Deal, and the Great Depression. During her tenure at the Herald Tribune she acted as mentor to an up and coming Ayn Rand.
Related Topics: William Lloyd Garrison, Auberon Herbert, Gustave de Molinari, Herbert Spencer, Lysander Spooner, Benjamin Tucker
Isabel Paterson (1886–1961), by Cato Institute, Mar 2003
Part of Cato's "Three Women Who Launched a Movement", celebrating during Women's History Month the sixtieth anniversary of the publication of The God of the Machine (as well as Rose Wilder Lane and Ayn Rand books published in the same year)

By the time God of the Machine was published, Paterson was living in Connecticut ... Her increasingly unfashionable political views led editors to push her out of her job at the Herald Tribune in 1949, but Paterson's investments enabled her to live well enough without resorting to the acceptance of Social Security benefits ... Conservative icon Russell Kirk ... believed that Paterson would forever be remembered for her columns, novels, and literary commentary. Instead, it is The God of the Machine and its effect on the nascent libertarian movement for which she is best remembered.
Related Topic: Ayn Rand
Book Review: Isabel Paterson and the Ideas of America, by Wendy McElroy, 30 Mar 2005
Review of the book Isabel Paterson and the Idea of America: The Woman and the Dynamo (2004) by University of California, San Diego professor of literature Stephen Cox

What a woman! Self-educated and self-made. Raised in the Wild West at the turn of the 19th century, [Paterson] was so enchanted by the age of machinery ... [T]he book's subtitle ... accurately identifies Paterson as an embodiment of ... the ideal America of freedom, individualism, and realized human potential ... Paterson eloquently argue[d] that productivity, as well as freedom, sprang from the Western world's embrace of a "society of contract" as opposed to the "society of status" which had defined feudalism. The visceral power of Paterson's presentation ... resides largely in her vivid imagery and exquisite turn of phrase.
Related Topics: Libertarianism, Ayn Rand
Isabel Paterson's Place in History, by Doug French, 20 Jun 2011
Review of Stephen D. Cox's The Woman and the Dynamo: Isabel Paterson and the Idea of America

Isabel Paterson is the 'Pat' Mimi Sutton [Ayn Rand's niece] was referring to — a 'radical individualist in both theory and practice,' explains Stephen Cox ... Paterson's The God of the Machine was one of four magisterial libertarian works to be published in the dark days of 1943. ... Paterson viewed men as dreamers, always looking to run off, change jobs, change the world, or conduct social experiments. While men are engaged in fanciful thinking and abstractions, women are more practical, getting down to work and raising families.
Related Topics: Ayn Rand, Franklin D. Roosevelt, Rose Wilder Lane
Our Forgotten Goddess: Isabel Paterson and the origins of libertarianism, by Brian Doherty, Reason, Feb 2005
A review of The Woman and the Dynamo

The God of the Machine was a radically individualist attempt to answer the question of why America was so rich and powerful. The most healthy and wealthy of cultures, said Paterson, ... had to run on 'absolute security of private property, full personal liberty, and firm autonomous regional bases for a federal structure.'
Rand, Ayn (1905-1982), by Chris Matthew Sciabarra, The Encyclopedia of Libertarianism, 15 Aug 2008
Biographical and bibliographical essay, also examining Rand's relationships with several leading thinkers

Her relationship with Paterson ... probably had the deepest impact on Rand's growing individualist sensibility. Paterson had introduced Rand to many key libertarian works in economics, history, philosophy, and politics. She also publicized Rand's writings in her New York Herald Tribune column ... Rand characterized God of the Machine as among the most "brilliant," "extraordinary," "invaluable," "sparkling," "heroic," and "illustrious" political tracts of its time—a virtual antidote to Marx's Das Kapital, and "the greatest defense of capitalism" she had "ever read."
Related Topics: Ayn Rand, Nathaniel Branden, Capitalism, Friedrich Hayek, Libertarianism, H. L. Mencken, Ludwig von Mises, Objectivism, Murray Rothbard
Rose Wilder Lane, Isabel Paterson, and Ayn Rand: Three Women Who Inspired the Modern Libertarian Movement, by Jim Powell, The Freeman, May 1996
Triple biographical essay on the women who in 1943 published The Discovery of Freedom, The God of the Machine and The Fountainhead

Paterson wrote novels and some 1,200 newspaper columns, but it was The God of the Machine which secured her immortality in the annals of liberty. It mounted a powerful attack on collectivism and explained the extraordinary dynamics of free markets ... She made clear why personal freedom is impossible without political freedom. She defended immigrants. She denounced military conscription, central economic planning, compulsory unionism, business subsidies, paper money, and compulsory government schools. Long before most economists, she explained how New Deal policies prolonged the Great Depression.
Related Topics: Nathaniel Branden, John Chamberlain, Communism, Entrepreneurship, Europe, Liberty, Roger MacBride, Albert Jay Nock, Ayn Rand, Leonard Read, Rose Wilder Lane

The Humanitarian with the Guillotine, Ideas on Liberty, Sep 1955
Reprinted from The God of the Machine (1943), chapter XX; analyzes the negative consequences of "humanitarians" (or professional philanthropists) and politicians act to provide relief to the needy

Most of the harm in the world is done by good people, and not by accident, lapse, or omission. It is the result of their deliberate actions, long persevered in, which they hold to be motivated by high ideals toward virtuous ends. This is demonstrably true; nor could it occur otherwise ... when the good people do know ... that three million persons ... were starved to death in one year ..., why do they still fraternize with the murderers and support the measures? Because they have been told that the lingering death of the three millions might ultimately benefit a greater number. The argument applies equally well to cannibalism.
Related Topics: Communism, Life, Personal Responsibility, Taxation, World War II

The Woman and the Dynamo: Isabel Paterson and the Idea of America
by Stephen Cox, Sep 2004
Partial contents: The View from the Wing - O Pioneers - The Unsheltered Life - Authorship and Exile - A Matter of Style - Queen Hatshepsut - Then or Anywhen - Never Ask the End - Let It All Go - Not Mad-But Atlantean

The God of the Machine, 1943
Partial contents: The Energy Circuit in the Classical World - The Power of Ideas - Rome Discovers Political Structure - Rome as an Exhibit of the Nature of Government - The Society of Status and the Society of Contract

Stephen Cox on Libertarian Literature and Prisons as Failed Planned Societies, by Stephen Cox, 20 Jun 2011
Cox discusses The Woman and the Dynamo (his biography of Isabel Paterson), her book The God of the Machine, his book The Big House (about American prisons) and Liberty magazine
Related Topic: Libertarianism

The introductory paragraph uses material from the Wikipedia article "Isabel Paterson" as of 16 Jun 2018, which is released under the Creative Commons Attribution-Share-Alike License 3.0.