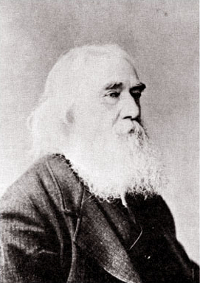 Lysander Spooner (19 January 1808 – 14 May 1887) was an American political philosopher, essayist, pamphlet writer, abolitionist, legal theorist and entrepreneur of the nineteenth century. He was a strong advocate of the labor movement and severely anti-authoritarian and individualist in his political views.

Spooner's most famous writing includes the seminal abolitionist book The Unconstitutionality of Slavery and No Treason: The Constitution of No Authority which opposed treason charges against secessionists. He is also known for competing with the U.S. Post Office with his American Letter Mail Company, which closed after legal problems with the federal government.

This article is derived from the English Wikipedia article "Lysander Spooner" as of 04 Jul 2018, which is released under the Creative Commons Attribution-Share-Alike License 3.0.