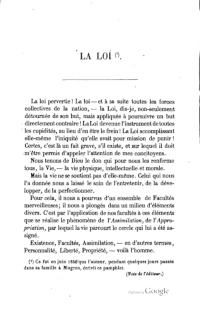 "La Loi" (French for "The Law") is a pamphlet written by Frédéric Bastiat in 1850. Bastiat argues that the law has been perverted by scholars of public law (publicists) and other intellectuals, so that instead of serving as organized justice, it has become the means for legalized plunder.

Annotated Bibliography of Frédéric Bastiat, by Sheldon Richman, Jul 2000
Opens with a biography, then discusses Bastiat's major works and concludes with a current perspective; includes short list of works about Bastiat and links to other sites

Bastiat's next book, The Law, is his venture into explicit political philosophy. In its clarity and brevity it is an achievement to behold ... Bastiat is squarely in the natural law camp (along with John Locke): "Life, liberty, and property do not exist because men have made laws. On the contrary, it was the fact that life, liberty, and property existed beforehand that caused men to make laws in the first place." He locates the source of law in human nature to live, human beings need liberty and property ... Bastiat concludes with a call for freedom and a rejection of all proposals to impose unnatural social arrangements on people.
Related Topics: Frédéric Bastiat, Broken Window Fallacy, Economic Fallacies, France, Free Market, Government, Law
Bastiat, Frédéric (1801-1850), by Jörg Guido Hülsmann, The Encyclopedia of Libertarianism, 15 Aug 2008
Biographical essay

In his essay "The Law," Bastiat argues that the whole point of this artificial institution, the law, is to protect the private property of each member of society: "It is not because men have enacted laws that personality, liberty and property exist. On the contrary, it is because personality, liberty and property already exist that men make laws." The law is "the collective organization of the individual's right to legitimate self-defense." Only insofar as man-made law supports nature-given private property is it just, and from the maintenance of justice a harmonious social order results.
Related Topics: Frédéric Bastiat, Broken Window Fallacy, Private Property, Society
The Bastiat Solution, by Sheldon Richman, The Goal Is Freedom, 29 Aug 2008
Analyzes segments of Bastiat's The Law (Dean Russell's translation) as "the best antidote for the toxic demagoguery" of the election season

The election season ... makes me want to reread Frederic Bastiat's The Law. It is the best antidote for the toxic demagoguery that issues forth from across the political spectrum ... I take refuge in Bastiat's sound philosophy ... Here are some gems ... that are particularly apt as the campaigns heat up.

What, then, is law? It is the collective organization of the individual right to lawful defense ... If every person has the right to defend ... his person ... then it follows that a group of men have the right ... the principle of collective right — its reason for existing, its lawfulness — is based on individual right.

And then in an amazingly short time a stream of publications began to pour forth ... Frédéric Bastiat's 75-page pamphlet, The Law, was translated by Dean Russell and published by FEE in 1950. So far, the Foundation has distributed 344,000 copies.
Related Topics: Atlas Network, Manuel Ayau, Foundation for Economic Education, Universidad Francisco Marroquín, The Freeman, Milton Friedman, F. A. Harper, Friedrich Hayek, Ludwig von Mises, Mont Pelerin Society, Leonard Read, George Stigler, The Wealth of Nations
Frederic Bastiat, Ingenious Champion for Liberty and Peace, by Jim Powell, The Freeman, Jun 1997
Biographical essay of Frédéric Bastiat, covering those who influenced him as well as those influenced by him, his writings (including correspondence with his friend Coudroy), his roles in the French Constituent and Legistative Assemblies and his legacy

In June 1850, Bastiat ... produced one of his most beloved works, The Law. He affirmed the natural rights philosophy, the most powerful intellectual defense of liberty which, except for the American abolitionist movement, had virtually vanished from the English-speaking world ... In [it], Bastiat celebrated "liberty, whose name alone has the power to stir all hearts and set the world to shaking ... freedom of conscience, of education, of association, of the press, of movement, of labor, of exchange; in other words, the freedom of everyone to use all his faculties in a peaceful way ..."
Related Topics: Frédéric Bastiat, Richard Cobden, Foundation for Economic Education, Benjamin Franklin, Free Trade, Government, Henry Hazlitt, Law, Libertarianism, Liberty, Gustave de Molinari, Rights, Jean-Baptiste Say, Adam Smith, Socialism, The State
Reading the Literature of Liberty, by Roy A. Childs, Jr., May 1987
Childs' selection of "great books", including works by Hazlitt, Bastiat, Rose Wilder Lane, Nock, Ayn Rand, Friedman, Hayek, Rothbard, Mises and Nozick

Move from economics to one of the keenest essays ever written on political theory, Frederic Bastiat's The Law. We are born into the world naked, he writes, and to live we human beings must produce the things we need. That's why we need property rights, and the function of just laws under a just government should be to protect these basic rights. But alas! the law has been perverted, and has become an instrument for legalized plunder. The Law was first published as a pamphlet in 1850; its truths remain eternal.
Related Topics: Frédéric Bastiat, For a New Liberty, Milton Friedman, Friedrich Hayek, Henry Hazlitt, Libertarianism, Man, Economy, and State, Ludwig von Mises, Albert Jay Nock, Ayn Rand, The Road to Serfdom, Murray Rothbard
The Roots of Modern Libertarian Ideas, by Brian Doherty, Cato Policy Report, Mar 2007
Survey of the history of libertarian ideas, from ancient China and Greece to 20th century writers; adapted from Radicals for Capitalism

The political means [of acquiring wealth] is especially dangerous when it masquerades as law. The 19th‐​century libertarian pamphleteer Frederic Bastiat in The Law complained of "the law perverted," of the law "not only turned from its proper purpose but made to follow an entirely different purpose. The law became the weapon of every kind of greed! Instead of checking crime, the law itself guilty of the evils it is supposed to punish!"
Related Topics: Frédéric Bastiat, United States Declaration of Independence, England, Greece, Libertarianism, Gustave de Molinari, Franz Oppenheimer, Herbert Spencer, Lysander Spooner, William Graham Sumner

The Law, by Frédéric Bastiat, Sheldon Richman (foreword), Walter E. Williams (introduction), Foundation for Economic Education, 1850
Translated by Dean Russell. Partial list of headings (added by translator): Life is a Gift from God - What is Law? - A Just and Enduring Government - The Complete Perversion of the Law - A Fatal Tendency of Mankind - Property and Plunder
Related Topic: Law