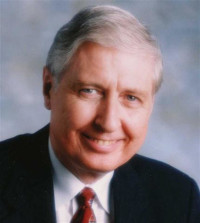 Harry Edson Browne (17 June 1933 – 1 March 2006) was an American writer, politician and investment advisor. He was the Libertarian Party's Presidential nominee in the U.S. elections of 1996 and 2000. He is the author of 12 books that in total have sold more than 2 million copies.

His 1974 book, You Can Profit from a Monetary Crisis, was an even greater success — remaining on the Times bestseller list for 39 weeks and reaching #1. Its message amplified themes from his first book, and it allowed thousands of investors to hold their own and to profit during the turmoil of the late 1970s. He wrote six more big-selling investment books — including one more Times bestseller. Inflation-Proofing Your Investments, written with Terry Coxon and published in 1981, introduced the Permanent Portfolio concept. In 1999, he published his final investment book, Fail-Safe Investing.
Laissez Faire Books

... Browne (b. 1933) has shown how individuals can achieve more liberty despite government restrictions and our own self-doubts. His 1973 book, How I Found Freedom in an Unfree World, provided specific advice for a wide range of issues. Why Government Doesn't Work (1985) identifies reasons why government programs are doomed to failure, and it spells out a program for specific, radical reform. Browne's books have sold over 2 million copies. ... Browne became well known as the author of popular investment books. He has focused on ways to help people protect their assets.

Advocates for Self-Government, Board of Advisors
Downsize DC, Co-founder
Eris Society, 1997, "On Running For President As a Libertarian"

Harry Browne was an American free-market Libertarian writer and the Libertarian Party's 1996 & 2000 candidate for President of the United States. He was also a well-known investment advisor for over thirty years, originator of the Permanent Portfolio concept, a consultant to the Permanent Portfolio Family of Funds, and author of 'Harry Browne's Special Report' -- a financial newsletter published from 1974-1997. He was the author of 23 books and thousands of articles, Co-founder and Director of Public Policy of the libertarian Downsize DC Foundation ... and a popular inspirational public speaker.

In late 1994, Browne announced his Libertarian candidacy for president. He campaigned in 38 states, and he appeared on over 1,000 radio and television programs. His pure approach to smaller government was praised in dozens of newspaper editorials and political columns. He was endorsed for president by dozens of radio talk show hosts and journalists. He received 485,759 votes on Election Day, the second highest total in Libertarian Party history. In 2000, he was again nominated to represent the Libertarian Party and garnered more than 382,000 votes in a tight presidential race.
Libertarian Party: Campaign 2000: Presidential Campaign
Includes introduction, look back at previous presidential campaigns and basic information and links for the nominees: Harry Browne and Art Olivier

This Journal provides information regarding Harry Browne's life and work. Entries were added periodically by his widow, Pamela Wolfe Browne ...

Harry Browne, RIP, by Lew Rockwell, 3 Mar 2006
Discusses the impact and influence of Browne's first book, his involvement in Libertarian politics in the 1990s and his outspokenness after 9-11

How sad to hear the news that Harry Browne (born June 17, 1933), author and long-time spokesman for libertarian causes, died March 1, 2006. He was a man of great principle who courageously and consistently stood up for liberty even when his position clashed with mainstream political culture and public opinion. He was a great writer who worked hard to turn a phrase in a way that would serve to educate people about free markets and the free society ... He changed minds, and stuck to principle the whole time. Harry was not tempted to sell out his message for the sake of more votes. He didn't trim or compromise.
Related Topics: Gold Standard, Libertarian Party
Libertarian Party Mourns the Loss of Beloved Candidate, Author, and Friend: Harry Browne Dies at Age 72, 2 Mar 2006
Libertarian Party memorial press release, covering both Browne's LP campaigns as well as his books and other activities

A well-known inspirational speaker and writer, Harry was the author of 12 books that sold more than 2 million copies. ... Harry was the founder of DownsizeDC.org, a non-profit group dedicated to reducing the size of government and forcing governmental institutions into compliance with the Constitution. He authored several popular books on the libertarian movement and philosophy ... During Harry Browne's campaigns, he made appearances in almost every state and was credited with over 1,000 media appearances. He was often praised by the media, and won the endorsements of multiple talk-show hosts and journalists.
The metaphysics of Atlanta: The Life of the Party, Part 20, by Steve Trinward, Rational Review, 14 Jun 2004
Another take on what transpired at the 2004 Libertarian National Convention and the selection of Badnarik as the nominee, from a Badnarik supporter prior to the start of the convention

One, Gary Nolan, appeared to many to lead pretty much where we had gone the last two times ... the look and feel was hauntingly familiar. (The joke even made the rounds that this would be the "Hairier Browner" campaign, owing to Gary Nolan's fuller head of dark brown hair and deeper tan.) ... there was enough concern about ... the perception of people lurking behind the scenes who had been instrumental in the two Browne fiascoes ... Similar experiences had been had with believing that Harry Browne would leverage his own contacts in the financial community into a mega-million-dollar enterprise.
Related Topics: Michael Badnarik, Libertarian Party
Personal 'Freedom': Review of Harry Browne's How I Found Freedom In An Unfree World [PDF], by Roy Childs, The Libertarian Forum, Apr 1973
While admitting that the book has many valuable insights, Childs chastises Browne on his definition of freedom and his views on morality and natural rights

[It] is considerably easier — if one is so inclined — to drop out of the State if one is, like Browne, a best-selling free lance author than if, like most of us, one must work in some regular and visible capacity ... this is Harry Browne's ... personal philosophy of life. Like all books of that sort, it is a mixture of brilliant insights and shallow sophisms. At the outset, it should be stated that Browne is at his best giving certain types of concrete advice concerning what he calls "how you can be free"; he is at his worst when he attempts to theorize about things, and to place them in a wide semi-theoretical context.
Related Topics: Ethics, Liberty, Political philosophy, Rights
The schism organism: The Life of the Party, part three, by Thomas L. Knapp, Rational Review, 19 Feb 2003
Delves into ethical controversies within the Libertarian Party, describing in particular the tension between Jacob Hornberger and Jim Lark, and the effect this had on the former's candidacy for the U.S. Senate seat in Virginia in 2002

Accusations, proven or not, take on lives of their own. As Harry Browne aptly put it, "it's easier for a person to convince the world that my sister is a prostitute than it is for me to prove that I don't even have a sister." Leaving aside the fact that, in at least some respects, Harry did have a metaphorical sister whose conduct matched the accusations, the point still holds true. If I accuse X of wrongdoing, X may disprove my allegations, but a year later, the allegations will be more clearly remembered than the rebuttal.
Related Topics: Ethics, Jacob Hornberger, Libertarian Party, Virginia

America, meet your leaders, WorldNetDaily, 19 Sep 2002
Written six months before the Iraq invasion, discusses the attitudes of George W. Bush and the pundits who agitated for the invasion and the lies that were told to start previous wars

Poor President Bush. He apparently wants to invade Iraq more than anything else in the world. And just when he thought he had sufficient support to do so, foreign leaders started backing out. So he went to the U.N. and gave a stirring speech – saying Saddam Hussein must allow weapons inspections or the U.S. will invade – only to have Hussein agree to allow the inspectors in. ... I love America, not its government. I am loyal to the Constitution, not to the politicians. I love the traditional American way of life, not the 1984 version we're living today.
Related Topics: George W. Bush, War
A Forgotten Day & a Forgotten Country, 28 Oct 2003
Reflections on the United States in 1886, when the Statue of Liberty was unveiled, and the current (2003) status

On this date in 1886, the Statue of Liberty was first unveiled in New York Harbor. You're probably aware that the Statue wasn't built in America. It was built with money voluntarily raised from the people of France — and then erected in New York Harbor with money voluntarily raised from the people of the United States ... We want to bring back 19th-century freedom and marry it with 21st-century technology. Then we can again celebrate this day and this country as it should be. And once again that great statue of Lady Liberty can provide light and hope and inspiration to the entire world.
Related Topics: Federal Reserve System, Foreign Entanglements, Statue of Liberty, United States
In Praise of the Libertarian Party, 4 Jun 2004
Discusses the obstacles faced by the Libertarian Party due to the inherently two-party system, as well as the benefits of the LP presidential campaign

With the Libertarian Party (LP) on television last weekend choosing its presidential nominee, it's time for the smug, superior types to come out of the woodwork and tell us what a sorry spectacle the party is ... If the Libertarian Party didn't exist, we would have to invent it. But, fortunately, we don't have to. It does exist, and it achieves a great deal that isn't accomplished by any other libertarian organization. The party is by no means the entire libertarian movement, but it's a vital part of it. Whether or not you decide to join the Libertarian Party, don't overlook what it does—and give thanks that it's there.
Related Topics: Government, Limited Government, Libertarian Party, Voting
What the Martha Stewart Case Means to You, 5 Mar 2004
Examines the Martha Stewart insider trading case, including juror and prosecutor comments after the guilty verdict

The Martha Stewart guilty verdict is more than troubling. It is an outrage. The very case itself typifies today's government — an entity that is free to intrude in any area of your life, free to make up the rules as it goes along, free to allow prosecutors to make names for themselves in high-profile cases without facing any personal consequences, no matter what harm they do ... Today, however, the guns of the government are available to force you and me to conduct our lives in whatever way such paragons of virtue as George Bush or John Kerry want us to live. It seems that nothing is a matter of persuasion anymore.
Related Topics: War on Drugs, Ethics, Founding Fathers, Rule of Law, Moral Repression

Fail-Safe Investing: Lifelong Financial Security in 30 Minutes, 1999
Partial contents: Keep It Safe and Simple - The 17 Simple Rules of Financial Safety - Build Your Wealth Upon Your Career - More about Protecting Your Wealth - More about Investing and Speculating - More about Erring on the Side of Safety
The Great Libertarian Offer, 2000
Partial contents: A Libertarian America - How Government Operates - Do You Want Freedom or Symbolism? - Free from the Income Tax - Freedom to Make Your Own Choices - Freedom from War - Freedom to Learn - The Libertarian Path - Liberty in Your Lifetime
Related Topic: Libertarianism
How I Found Freedom in an Unfree World: A Handbook for Personal Liberty, 1973
Partial contents: I-Why You Are Not Free - The Identity Trap - The Government Trap - II-How You Can Be Free - Freedom from Government - Freedom from Social Restrictions - III-A New Life - Who Are You? - Your Own Morality - A Fresh Start - Making Changes
Related Topic: Individual Liberty
Why Government Doesn't Work: How Reducing Government Will Bring Us Safer Cities, Better Schools, Lower Taxes, More Freedom and Prosperity for All, 1995
Partial contents: Ooops! Why Government Programs Always Go Astray - If You Were King (The Dictator Syndrome) - How Freedom Was Lost - How Much Freedom Is Left? - Fixing America's Problems - Do We Really Want Government to Protect Family Values?
Related Topic: Government

The introductory paragraph uses material from the Wikipedia article "Harry Browne" as of 5 May 2018, which is released under the Creative Commons Attribution-Share-Alike License 3.0.