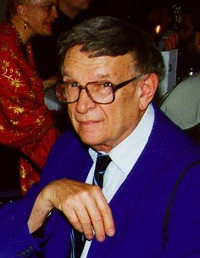 John Hospers (9 June 1918 – 12 June 2011) was an American philosopher and political activist. Hospers was interested in Objectivism and was once a friend of Ayn Rand, though she later broke with him. In 1972 Hospers became the first presidential candidate of the Libertarian Party, and was the only minor party candidate to receive an electoral vote in that year's U.S. presidential election.

Advocates for Self-Government, Board of Advisors
University of Southern California, Emeritus Professor of Philosophy

John Hospers has two significant 'firsts' by his name: he was the first presidential candidate of the Libertarian Party, and his book Libertarianism was one of the first full-length studies of the modern libertarian philosophy. ... In 1961, Hospers was introduced to novelist Ayn Rand. The meeting blossomed into friendship, and the two spent many evenings in philosophical conversation. Hospers later recalled those talks as 'among the most intellectually exhilarating of my life.' ... In 2002, an hour-long video about his life, work, and philosophy was released by the Liberty Fund of Indianapolis as part of its Classics of Liberty series.
Libertarian Party: Campaign 2000: Presidential Campaign
Includes introduction, look back at previous presidential campaigns and basic information and links for the nominees: Harry Browne and Art Olivier

John Hospers and Theodora 'Tonie' Nathan made history when, in 1972, they were nominated as the Libertarian Party's first presidential and vice-presidential candidates. Although the Hospers-Nathan ticket only made the ballot in two states and received less than 3,000 votes, they were the first and only Libertarians to receive an electoral college vote. Hospers, a professor of philosophy at USC, also authored Libertarianism, one of the Libertarian movement's great defining books in its early years.
Related Topics: David Bergland, Harry Browne, Ed Clark, Libertarian Party, Roger MacBride, Andre Marrou, Tonie Nathan, Ron Paul
Libertarian Party: History: Presidential & Vice-Presidential Candidates

John Hospers (born 9 June 1918) was the first presidential candidate of the United States Libertarian Party, running in the 1972 presidential election. He has also been an educator, a magazine edior, and a prolific writer. ... Recognizing that Rand's ethical system could also be supported by others unfamiliar with Objectivist epistemology and metaphysics, he codified a somewhat broader common principle that opposes the initiation of physical force (see non-aggression principle); this formulation later became the certification statement (or 'pledge') required for membership in the United States Libertarian Party.

One of the highlights of the afternoon was a talk by Prof. John Hospers, professor of Philosophy at USC, 1976 LP candidate for President, and author of the highly acclaimed work Libertarianism. Prof. Hospers gave a moving analysis of "Libertarianism and the Arts," stressing the power of art to communicate moral and political situations and ideals. Hospers read a few stirring passages from the novels of Alexander Solzhenitsyn to drive home his point. The audience gave Dr. Hospers a warm standing ovation.
Related Topics: Nathaniel Branden, Libertarian Party, Roger MacBride, Earl Ravenal, Murray Rothbard
Begrudging Another Battle of Ballot-Boxing, by Kenneth R. Gregg, 23 Nov 2006
Explains how those seeking power through politics are led to compromise, even if they are members of a group espousing principles over expediency, and urges others not to ballot-box but instead vote in the marketplace and the social realm

When John Hospers arrived at the Los Angeles Airport from the first Libertarian Party Convention in Colorado, June, 1972, I was there waiting for a friend of mine arriving on the same flight from the same convention. When I saw Dr. Hospers (we had met previously at a USC Conference), I asked him if he had seen my friend, and then asked him what fool had received the LP Convention nomination as their presidential candidate. He looked at me somewhat oddly and mumbled to me as he passed on. I discovered later that he was the Grand Elector. My opinion has yet to change about the consequences of the LP.
Related Topics: Free Market, Libertarian Party, Politics, Republican Party, The State, Taxation, Voting
Hero of the Day - John Hospers (2), The Daily Objectivist, 2000
Reworded version of the other "Hero of the Day" article on Hospers, with a different excerpt from his Full Context interview

Their largest area of 'intelligent agreement' seemed to be in aesthetics (Hospers has authored a text on the subject, Understanding the Arts). ... He had more questions when it came to ethics and epistemology. Indeed, it is clear from the electric correspondence that passed between them, some of it published in The Letters of Ayn Rand, that he played a crucial role in her intellectual development. Many of her letters—answering objections raised by Hospers—are virtually first drafts of later essays. His impact on Rand's thought has still not been adequately credited by scholars of her work.
John Hospers - Hero of the Day, The Daily Objectivist, 2000
Highlights of Hospers "Memories of Ayn Rand", followed by two excerpts from his Full Context interview

John Hospers has lived a somewhat quieter life than a philosophical action hero like Jack Wheeler. ... But only Dr. John Hospers can lay claim to the most exhilarating, daring, and death-defying adventure of all: sustained and critical philosophical discourse with novelist-philosopher Ayn Rand. When Hospers met Rand in 1961, he was suffering from philosophical 'tired blood.' Their brief friendship revitalized him. 'She renewed my confidence in my profession,' Hospers would tell the international Objectivist newsletter Full Context. 'A confidence that has continued to this day.'
Related Topics: Objectivism, Ayn Rand
On Political Activism, by Samuel Edward Konkin III, Reason, May 1977
Letter to the editor, criticizing John Hospers' view that running for political office as part of the Libertarian Party is "the quickest way of getting libertarian ideas known to millions"

The paragraph ... happens to be authored by Dr. John Hospers:

One fact can hardly be controversial: that running for political office, and assuming such office if one wins, is the quickest way of getting libertarian ideas known to millions—not at any great level of profundity, of course, but then neither do those who voted in the present mixed economy have convictions of any great degree of profundity. To the extent that libertarianism is known in the United States today, it is almost entirely because libertarians have formed a political party whose members ran for office and had their ideas publicized in newspapers, magazines, radio, and television.

Related Topics: Libertarianism, Libertarian Party
An open reply to John Hospers, by Brad Spangler, Rational Review, 25 Oct 2004
Response to a Hospers email endorsing George W. Bush over John Kerry or Michael Badnarik; includes the text of the email, dated 22 Oct 2004, after the reply to let "the reader make up their own mind"

I ... received a forwarded email from a notable man recently, one worthy of great respect -- Dr. John Hospers ... It is with no small amount of trepidation that I write a rebuttal to the sincere plea of a beloved Libertarian Elder Statesman. ... Notable also is where Hospers' criticism of the Democratic Party stumbles, although it is mostly dead on. In cataloging the horrors the Democratic Party is filled with, he cites anti-Semitism. ... when John Hospers talks about potential Democratic electoral funny-business ... he conspicuously fails to mention that there are equivalent concerns relating to the GOP.
Related Topic: Michael Badnarik
This Is The Movement You Have Chosen, by Murray Rothbard, The Libertarian Forum, Apr 1984
Reports on media coverage of the 1983 Libertarian Party presidential convention and comments on goings-on in the Crane Machine (CM), i.e., Ed Crane and Cato Institute

Meanwhile ... Professor John Hospers, hero of the LP's small ultra-right wing, has slithered his way out of the Libertarian Party and into the ranks of the Republicans. Hospers now supports Ronnie Reagan for re-election, and laments that the LP has been taken over by backers of unilateral disarmament. (See the USC Daily Trojan, Oct. 21, 1983). Since the LP's platform is still solidly pro-multilateral disarmament, and hasn't changed on the issue in many years, and since the unilateral disarmamentists have always been in a minority, one wonders what world John Hospers has been inhabiting in recent years.
Related Topics: David Bergland, Roy Childs, Earl Ravenal

A Libertarian Argument Against Opening Borders, The Journal of Libertarian Studies, 1998
Written for a JLS symposium issue on immigration, argues against open borders mostly from a conservative viewpoint, for example, citing approvingly Peter Brimelow, National Review and Irving Kristol

The main obstacle that confronts the 'open borders' policy is that many people enter the United States in order to collect the free benefits that it has to offer: food stamps, welfare payments, free medical care, and so on. ... Some Californians say that we need immigrants to do the menial labor, such as picking strawberries. Do they really mean that without immigrants, strawberries would not get picked? In the absence of ultra-cheap labor, strawberries might well cost more, but the activity would continue as long as people had a taste for strawberries at a non-prohibitive price.
Libertarianism and Legal Paternalism [PDF], The Journal of Libertarian Studies, 1980
Discusses laws "designed to protect people from themselves" arguing that in general such laws are illegitimate

In his book Principles of Morals and Legislation, the eighteenth-century philosopher and legislator Jeremy Bentham divided all laws into three kinds: (1) laws designed to protect you from harm caused by other people; (2) laws designed to protect you from harm caused by yourself; and (3) laws requiring you to help and assist others ... Once it is clear that our goals for a person do not coincide with his goals for himself, and once we have used reason and possibly persuasion to convince him ... It is, after all, just another application of Kant's Second Moral Law—that we should always treat others as ends in themselves, never as means toward our own ends.
Related Topics: Jeremy Bentham, Children, Liberty, Moral Liberty, Life, John Stuart Mill
Libertarian Thoughts Reborn, 23 Aug 2003
Part of Walter Block's autobiography series; starts off with his grandparents, early life in Iowa, skepticism, astronomy, teaching at Columbia University and University of Minnesota, interacting with Ayn Rand, the 1972 LP nomination and parting thoughts
Related Topics: Henry Hazlitt, Libertarian Party, Ludwig von Mises, Ayn Rand, Murray Rothbard

I was born and raised in a small Dutch town near Des Moines, Iowa, settled by the Dutch in 1847. The first language I learned was Dutch, and almost everyone in the town spoke it, as well as English. The Dutch Reformed Church dominated the life of the town, though there was no religious training in the public schools. People were very industrious and hard-working. I don't think anyone in the town was on welfare, and the average income of families was the highest in the state. There were tulip gardens all over the place, and every year in May they'd have an annual tulip festival—everyone in Dutch costume, scrubbing the streets, singing Dutch songs—the whole bit.
Related Topics: David Hume, David Kelley, South Korea, Philosophy, Ayn Rand

John Hospers: From 1776 to 1984, 12 Jul 1984
Hospers compares the American Revolution to the scenes in Orwell's Nineteen Eighty-Four, as well as the year this talk was given and Huxley's Brave New Wold; presented at the Libertarian International conference in London
Related Topics: American Revolutionary War, George Orwell

The introductory paragraph uses material from the Wikipedia article "John Hospers" as of 23 Jul 2018, which is released under the Creative Commons Attribution-Share-Alike License 3.0.