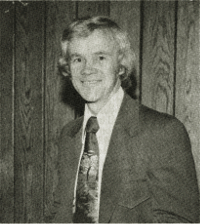 In addition to his presidential candidacy, Bergland is perhaps best known for his book Libertarianism in One Lesson. Now in its ninth edition, it has sold over 150,000 copies. ... Bergland has been an enthusiastic supporter of the Advocates for Self-Government since the organization was founded. Bergland spoke at several early Advocates conventions and at the Advocates' 20th Anniversary Celebration in 2005, and appears on several of the most popular Advocates tapes and CDs on how to effectively communicate libertarian ideas.
Related Topics: California, Libertarian Party
Libertarian Party: Campaign 2000: Presidential Campaign
Includes introduction, look back at previous presidential campaigns and basic information and links for the nominees: Harry Browne and Art Olivier

Attorney and long-time LP activist David Bergland and tax-protestor Jim Lewis carried the LP banner in 1984. In the face of a much tighter budget and stricter ballot access laws than in previous campaigns, Bergland-Lewis still managed to get on the ballot in 39 states. They were also the first Libertarians to come in third in the popular vote, with 228,705 votes. In addition, Bergland's Libertarianism in One Lesson is still used as an introductory text to Libertarianism.
Related Topics: Harry Browne, Ed Clark, John Hospers, Libertarian Party, Roger MacBride, Andre Marrou, Tonie Nathan, Ron Paul
Libertarian Party: History: Presidential & Vice-Presidential Candidates
Includes image of campaign button

This Is The Movement You Have Chosen, by Murray N. Rothbard, The Libertarian Forum, Apr 1984
Reports on media coverage of the 1983 Libertarian Party presidential convention and comments on goings-on in the Crane Machine (CM), i.e., Ed Crane and Cato Institute

T. R. Reid, in a long ... article called Dave Bergland "an outspoken antigovernment activist who is considered a hard-liner even by the Libertarians' stern standards." (Whoopee!) "In choosing Bergland", the Post's Reid added, "the Libertarian delegates chose ideological purity and turned away from the more pragmatic approach of their 1980 Presidential nominee, Ed Clark." ... Bergland, Reid pointed out, spoke of "the ideal of liberty" and the "ugliness" of government ... In contrast to the Clark campaign of 1980, Bergland declared that Social Security should be "terminated forthwith".
Related Topics: Roy Childs, John Hospers, Earl Ravenal
Total Victory: How Sweet It Is!, by Murray N. Rothbard, The Libertarian Forum, 1983
Lengthy account and commentary on the 1983 Libertarian Party presidential convention

Out of a chaotic, confused, wild, hectic, crazy, convention, in the closest, murkiest, most exciting all-out contest in Libertarian Party history, David P. Bergland of California won the nomination for President on the fourth ballot ... David P. Bergland, a California attorney, a hard-core and principled radical libertarian, needed no coaxing. He saw that the Libertarian Party needed a candidate, and a principled one, desperately, and so he threw his hat promptly and enthusiastically into the race ... Bergland became a candidate on Friday, August 26 ... By noon on Saturday, Bergland was permanently committed to the race.
Related Topics: Roy Childs, Robert A. Heinlein, Libertarian Party, Roger MacBride, Tonie Nathan, David Nolan, Ron Paul, Robert W. Poole, Jr., Justin Raimondo, Earl Ravenal, Mary Ruwart

Murray, the LP, and Me, 25 Dec 2002
Lengthy autobiographical essay, focusing on Rothbard, libertarianism and the LP; reprinted in Walter Block's I Chose Liberty (2010)

I was introduced to Murray Rothbard the economist long before I came to know him as a radical libertarian anarcho-capitalist activist. Reading Rothbard, beginning in the early 1960s, was a great experience for me, but that was not my introduction to libertarianism ... At the 2002 LP National Convention in Indianapolis, I was on a panel ... During my presentation, I took the opportunity to give thanks to some no longer with us. I was grateful to be able to fill these new libertarians in on the profound and lasting effects of Murray Rothbard's contributions to the Party and the movement. He will be remembered.
Related Topics: Barbara Branden, Nathaniel Branden, Cato Institute, Ed Crane, For a New Liberty, Human Action, Libertarianism, Libertarian Party, Roger MacBride, Objectivism, Earl Ravenal, Murray N. Rothbard

The introductory paragraph uses material from the Wikipedia article "David Bergland" as of 14 Jan 2018, which is released under the Creative Commons Attribution-Share-Alike License 3.0.