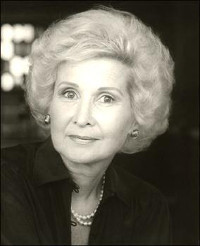 Barbara Branden (née Weidman; 14 May 1929 – 11 December 2013) was a Canadian writer, editor and lecturer, known for her relationship and subsequent break with novelist-philosopher Ayn Rand.

Barbara Branden was a close associate of Ayn Rand's during the 1950s and 1960s. ... Tapes of her lectures, The Principles of Efficient Thinking, are still available. Branden contributed a biographical chapter on Rand in the book Who Is Ayn Rand? (1962). Her biography The Passion of Ayn Rand (1986) told the full story for the first time, including how Rand developed her ideas, how Rand wrote her beloved books, and how Rand and Nathaniel Branden had an affair which changed their lives. ... In 1999, Showtime aired a TV movie based on The Passion of Ayn Rand.

Advocates for Self-Government, Board of Advisors
Eris Society, 2000, "Ayn Rand As I Knew Her"

Barbara Branden
Posthumously maintained site, including information about Branden's life, writings, projects and Nathaniel's and her responses to Ayn Rand's Oct 1968 article about them

This site provides biographical information about Barbara (including some photos of interest) as well as information about her landmark biography The Passion of Ayn Rand and Showtime's movie adaptation of the book. This web site also contains a description of Barbara's seminal course 'Principles of Efficient Thinking', her interview with the publication Full Context, and a short essay by Barbara on smoking, as well as her answer to Ayn Rand's famous charges of wrongdoing (from the 1960's).

About Barbara Branden
Biographical profile including some photographs

BARBARA BRANDEN is a writer and lecturer. She earned her M.A. in philosophy, and authored a thesis on free will, under the direction of Sidney Hook at New York University. She was Ayn Rand's intimate friend and colleague for eighteen years, and a close friend of the members of the 'Rand Circle.' She was Managing Editor of The Objectivist, a philosophical journal, and Executive Vice-president of Nathaniel Branden Institute in New York. At NBI, she conceived and presented a popular course on the nature of efficient thinking.
Advocates for Self-Government - Libertarian Education: Barbara Branden - Libertarian
Includes picture and biography (from Laissez Faire Books)

You can find great substance in one of her latest audio recording Influence of Ayn Rand: 'I want to infect you with my optimism,' says Barbara Branden, on the question, 'Can Our Ideas Make a Difference?' She contrasts her difficult experiences when first trying to promote these ideas as a university student with key aspects of today's culture to show that they not only can make a difference, they already have. ... The British National Theater presented the stage version of The Passion of Ayn Rand at London's West End.

The part I especially appreciated was Barbara's treatment of Rand's early years, about which I knew relatively little. I was impressed by her research. And the book is well-written. Her treatment of the affair with Ayn and later with Patrecia was off on a number of points and left out a good deal that was important. To some extent, that was understandable. ... when she complained that she couldn't decide what to call the book, I suggested The Passion of Ayn Rand—which she immediately liked. On most of the big issues, I think anyone can see that our portraits of Ayn Rand are fairly congruent.
Related Topics: Children, Ethics, David Kelley, Life, Romantic Love, Objectivism, Personal Responsibility, Psychology, Ayn Rand, Chris Matthew Sciabarra, Self-Esteem, Sexual Pleasure
Murray, the LP, and Me, by David Bergland, 25 Dec 2002
Lengthy autobiographical essay, focusing on Rothbard, libertarianism and the LP; part of Walter Block's Autobiography Archive

I did meet Rand, Nathaniel and Barbara Branden, sometime about 1965 ... at a major Objectivist event in Los Angeles ... I was a Senior Fire Inspector with the L.A. Fire Department with responsibility for public assemblages. So I showed up at their event in my official role. It was packed to the rafters, with exits blocked and various other life hazards violating the Fire Code. Barbara Branden spoke to me, asking if they could pay a fine and go on with the show. Very New York. I told her that would not be necessary, I was an Objectivist and on their side. We went to work unlocking the exits ... and the show did go on.
Related Topics: Nathaniel Branden, Cato Institute, Ed Crane, Human Action, Libertarianism, Libertarian Party, Roger MacBride, Objectivism, Earl Ravenal, Murray Rothbard

Interview with Barbara Branden, by Barbara Branden, Karen Minto, Full Context, Oct 1998
Topics discussed range from her move from Los Angeles to Winnipeg and then to New Mexico, how she stopped smoking and the Showtime movie made from her book, including her impressions of Helen Mirren as Ayn Rand and Peter Fonda as Frank O'Connor

In March of 1997, a friend and I visited a mutual friend who lived in Santa Fe. ... The first evening of my visit, I went outside the dining room where we were eating, to smoke a cigarette (I am no longer a smoker, by the way) and to look at the city. I have felt, all my life, like a wanderer—which suited me very well. I've never had a desire to stay permanently in one place. ... As I stood outside that evening, unable fully to believe the beauty of the mountains, the city, and the sky—I suddenly felt, for the first time in my life, 'I'm home.' I felt that I finally had found what was over all the hills.
Related Topics: Los Angeles, Ayn Rand
Lindsay Perigo Interviews Barbara Branden, by Barbara Branden, Lindsay Perigo, 17 Apr 2002
Branden answers questions about New Zealand, the 11 Sep 2001 attacks, Ayn Rand, objectivism and factionalism within the objectivist movement

I don't have many preconceptions about New Zealand, and I am very eager to learn more about it. I have heard many times that it is very beautiful, which is a great attraction for me. No, I don't think it is the freest country on earth; I once did, but you convinced me otherwise. New Zealand to me is another world, strange and fascinating. ... I'm convinced that there can be many reasons why one is attracted to one person rather than another and, sometimes, it is difficult to understand the reasons. They can be very complex; they can be a function of some aspect of the person and not others ...
Related Topics: George W. Bush, Romantic Love, New Zealand, Objectivism, Ayn Rand

The introductory paragraph uses material from the Wikipedia article "Barbara Branden" as of 29 May 2018, which is released under the Creative Commons Attribution-Share-Alike License 3.0.